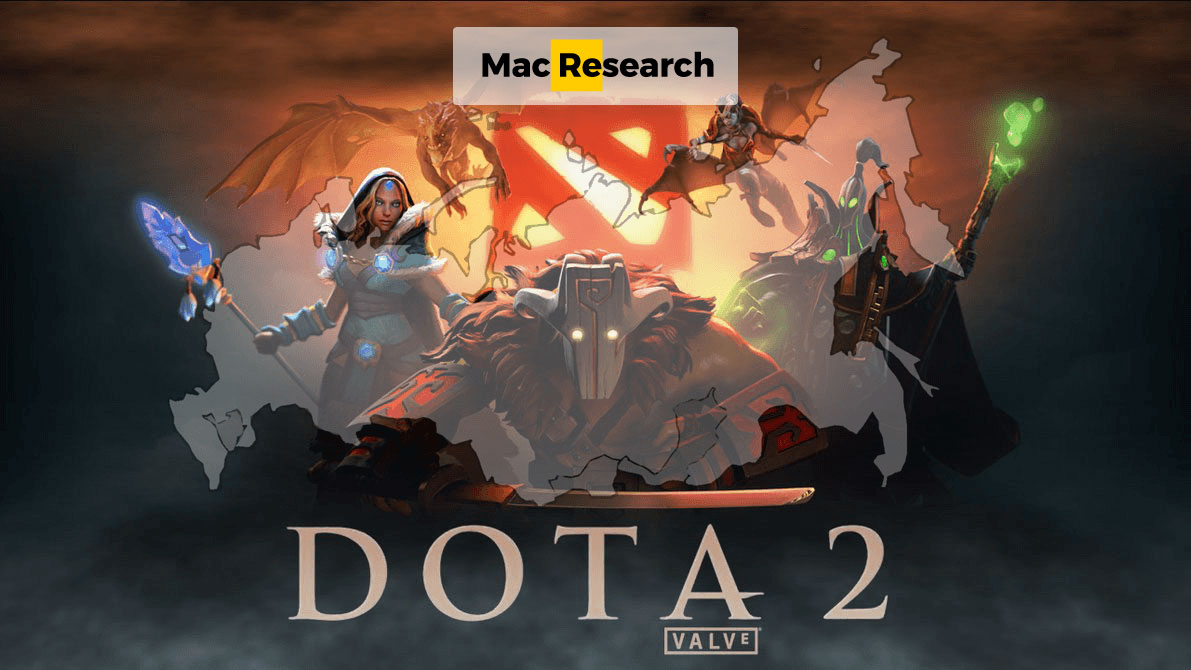 About Dota 2 on Mac

Defense of the Ancients 2 (DotA2) is a multiplayer online battle arena (also known as MOBA) created by Valve. The video game is originally a mod to Warcraft III. Dota 2 is a team-based game in which each team has its own base on the battlefield, which they have to defend at all costs. It is up to the 10 players to take control of their own powerful “heroes”, each with their own special skills and playing styles. Players collect experience points for the heroes of each team during a match in order to defeat the opponents in player vs player battle. The winner of the game is the first team who manages to demolish the opponent’s “Ancient”, a massive structure inside their base.

The development of Dota 2 started in 2009, when Valve engaged IceFrog, the lead creator of Defense of the Ancients, to produce a contemporary recreation of the game in the Source engine. In July 2013, after a two-year open beta period for Windows-only users, the game was made available for Microsoft Windows, OS X, and Linux via the digital distribution platform Steam. To play the game, you do not need to spend any money on heroes or other gameplay elements. Dota Plus, a subscription service offered by Valve, provides non-gameplay altering virtual items in return, such as hero cosmetics and audio replacement packs, as a means to support the game. Dota 2 was introduced to the Source 2 engine in 2015.

There’s nothing particularly demanding in terms of resources about this game, therefore, any contemporary Mac should be able to run it.

Dota 2 is ranked as Steam’s most popular game. Millions of Dota gamers across the world fight each day as one of the hundred heroes in the game. Taking on a path of its own, Dota 2 has become a phenomenon thanks to the regular upgrades that keep the gameplay, features, and hero pool fresh, so players always have something new to experience and uncover.

Infinite Possibilities on a Single Battlefield

Two teams of five players each compete to demolish a gigantic structure defended by the enemy team, known as the “Ancient”, while simultaneously protecting their own. The game is played using normal real-time strategy controls and is displayed in a three-dimensional isometric perspective on a single map, like Defense of the Ancients. Each of the game’s 122 playable characters, referred to as “heroes” has its own unique appearance, abilities, and weaknesses. There are two types of heroes: core heroes and support heroes. A pre-game drafting process allows players to discuss their team’s strategy and hero matchups with their fellow players.

Once a hero is selected, it is permanently withdrawn from the drafting pool and cannot be changed by the player after the drafting phase. All heroes have basic attack abilities that they use to combat, plus other powerful abilities. For every hero, there are at least four powerful abilities to choose from. At the start of each game, heroes have a level one experience and can only use one of their skills. As they progress through the game, they gain experience and power, up to the maximum of level 30. With each hero level, the player can learn a new skill or improve an existing one they already have. Each hero’s “ultimate” is the most powerful skill they have.

It’s impossible to play a game of Dota without encountering a new hero, ability, or a powerful item and experiencing something new with each game. All heroes can play many roles and there is a variety of items to choose from in order to achieve the goal of the game. Dota doesn’t impose rules on how you can play, instead, it gives you the freedom to develop your own personal style.

All heroes are free

Dota 2 gives competitive balance to everyone right from the start, and all players have access to the game’s large pool of heroes for free. You don’t need to buy anything to play, but there are plenty of ways to personalize your heroes and the environment they live in.

The two competing teams, dubbed Radiant and Dire, have fortified bases in opposite corners of the map. The map itself is divided in half by a crossable river and connected by three paths known as “lanes”. Defensive towers protect the lanes, attacking any invading units that come inside their line of sight. Additionally, players are able to purchase things from certain spots on the map, known as shops, that give them special skills.

Bring your pals along and have a good time.

Contrary to popular belief, Dota 2 is widely regarded as one of the best video games ever made. Despite some complaints about its steep learning curve and high level of technical sophistication, since its release, the game has been one of Steam’s most popular games, attracting over a million players at its height.

Even though Dota 2 is a complex and ever-changing game, it’s never too late to get involved. You can play co-op against bots to get started. The hero demo mode allows you to hone your talents. You can also take advantage of the behavior and skill-based matchmaking system to play with matching players in each game.

Can you play Dota 2 on Mac?

You can play Dota 2 on Mac provided that your Mac meets the system requirements for the game, which aren’t particularly high. All you need to do to play Dota 2 on your Mac is get a Steam account and download the game from Steam.

Dota 2 is a highly popular game and e-sport with a large player base and so it is available for a big number of platforms, including macOS. This makes playing the game on Mac very easy, as one can directly download it from Steam and start playing without needing to employ any complex workaround methods. Since this is a free game, you won’t need to purchase anything in order to play it, and the installation of the game happens simultaneously with the downloading process, so everything is very streamlined and easy to set up.

Downloading and installing the game from Steam, however, isn’t the only way to play it on a Mac. There is, in fact, a quicker way to run Dota 2 on your Mac computer, and that is through the use of cloud-gaming services. You will learn more about this method of playing the game in the following lines, where we will give you detailed instructions on how to play Dota 2 on your Mac.

How to play DotA 2 on Mac

To play Dota 2 on Mac, you must first create a Steam account, download Steam, and then download the game through it. Another viable option through which you can play Dota 2 is by using a cloud-gaming service such a Boosteroid or GeForce Now.

Dota 2 is officially available for Mac systems, so if you want to play it on your Mac, you can easily download it and install it on your computer. The game is free and also has relatively low system requirements (see below), so even older Macs should be able to run it.

However, if you don’t want it to take place on your Mac, you can instead play Dota 2 through a cloud-gaming service. Boosteroid and GeForce Now are two such services that have Dota 2 in their libraries, so you can use them to play the game without having to install it on your Mac. Below, we will show you helpful instructions on how to play the game through each of the three mentioned methods.

Dota 2 is now available to play on cloud gaming servers. This assures NO
compatibility issues while playing on your Mac as well as top-notch performance.

Before playing Dota 2 make sure you get the game through the official website bellow. For the moment only the Steam Platform is compatible with cloud gaming services such as Boosteriod and Geforce.

All you need to do now is register for Boosteroid. This allows you to add Dota 2 to their Cloud Gaming Library. Once uploaded you can seamlessly play the game from your Mac, TV or Mobile Device.

You can download Dota 2’s Mac version from Steam – the game would take a little over 37 GB of storage space once installed on the computer:

How to play Dota 2 through Boosteroid

Using the Boosteroid cloud-gaming service, you will be able to play Dota 2 directly from your browser, without needing to install anything. Another significant advantage of services such as Boosteroid is that, through them, you can play games that are not officially available for Macs. Obviously, that is not the case with Dota 2, but if you also want to be able to play another game – one without a macOS version – you can play both Dota 2 and the other game through Boosteroid.

All that is required to play the game is for you to have a Steam account and a Boosteroid account with a paid subscription plan. Since Dota 2 is free, you won’t need to buy, but if you also want to play other games through Boosteroid, games that are paid for, you will first need to have purchased them.

Here is how to quickly set up your Boosteroid account and start Dota 2 through the service.

How to play Dota 2 through GeForce Now

GeForce Now is very similar to Boosteroid – it lets its customers play any game from the service’s library, so long as they already own the game in question or the game is free. Unlike Boosteroid, GeForce Now has a free subscription plan, but there are a couple of significant restrictions to it, namely that gaming sessions are limited to 1 hour and that free users need to wait in a queue, which can sometimes take a while. Another difference is that to use GeForce Now, you must first download and install its client app, but this only takes a couple of minutes. Below are our brief instructions on how to use the service:

For more details on setting up and using GeForce Now, please, visit this page.

There are sometimes differences between gaming on Intel Macs and M1 Macs when talking about games that aren’t officially available for macOS because in those cases, the workaround methods used to run them on a Mac differ depending on whether that Mac has an Intel processor or an M1 chip. In the case of Dota 2, however, there’s virtually no difference between the two types of Mac models on how to play the game on them. The instructions on installing Dota 2 on Mac we’ve shown you above should work equally well on both Intel and M1 Macs. The same also applies to the Boosteroid and GeForce Now methods.