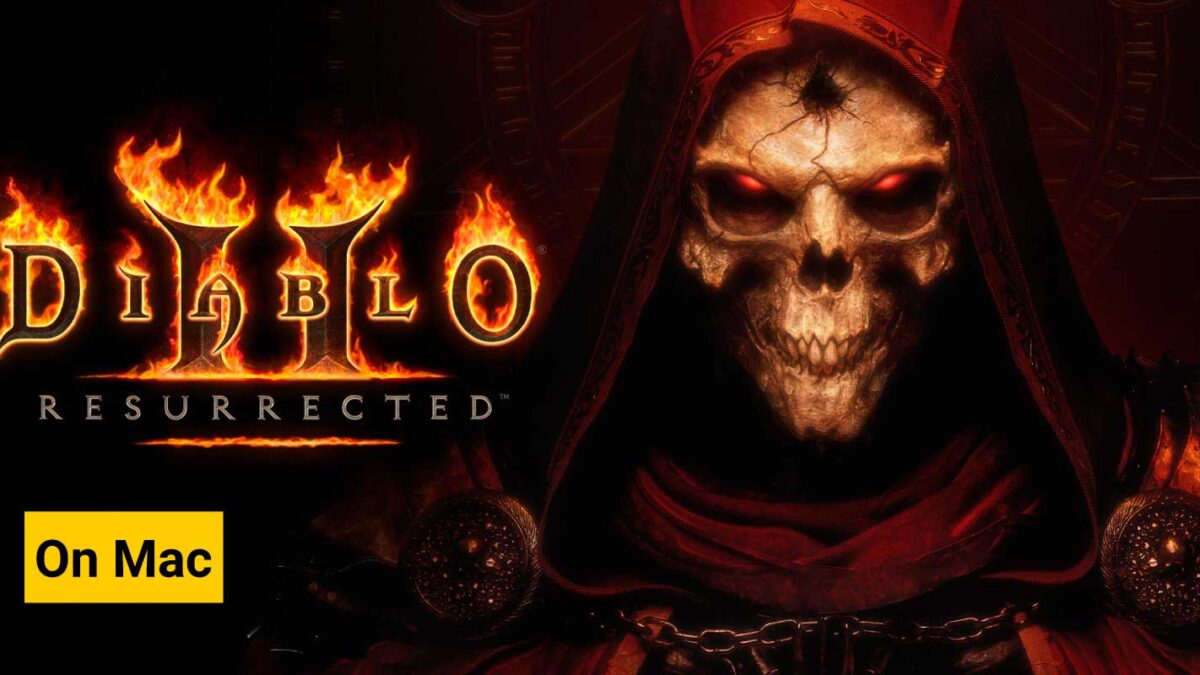 About Diablo 2 Resurrected on Mac

Another classic Blizzard title got its remake/remaster and many old-school gamers are hyped about it and are looking forward to giving it a try. Diablo 2: Resurrected was released on the 23d of September this year – the result of the collaboration between Blizzard Entertainment and Vicarious Visions.

For those unfamiliar with the Diablo games franchise, this is a series of RPG, hack-and-slash games that got extremely popular in the late 90s and early 2000s with its first two installments and their expansion packs. Diablo 2, especially, has gone down in gaming history as one of the classics, next to titles such as Warcraft 3, Age of Empires, Half-Life, and more. Sometime later, in 2012, the long-awaited Diablo 3 came out and gamers who remembered the glory of its predecessors had high hopes for it.

Unfortunately, the third installment of this legendary franchise didn’t live up to the hype that surrounded it. Much time passed and Blizzard decided to remake one of its other classic titles – Warcraft 3. This 2020 remake of the game also got a lot of hype and expectations for it were very high. Sadly, Warcraft 3: Reforged (the remake version) was an even greater disappointment for pretty much everyone who took any interest in the game.

All of this brings us to the current topic of this article – Diablo 2: Resurrected – a remastered version of Diablo 2 which got released back in 2000. At the moment of writing this post, the game has been out for no more than a week, but enough eager gamers have already given it a try and the general consensus is that… the remaster isn’t particularly good. As is the case with a lot of newly-released games nowadays, the main complaints stem from the fact that the game is still unpolished and the abundance of bugs that will have to be patched out after the game’s release. On the bright side, the graphics have (obviously) been improved significantly without making the game unrecognizable.

The way the game has been changed graphically is reminiscent of the Age of Empires 2: Definitive Edition, where you can still tell it’s the same old Age of Empires 2 game but with vast graphical improvements that make everything more enjoyable. That said, Diablo 2: Resurrected still has its problems (quite a lot of them) and if you really want to play this game, you’d have to be prepared.

To be fair, though, the engine and the mechanics of the game are from over twenty years ago, and while many gamers claim that this is what they want from the Diablo 2 remaster, it’s also possible that a lot of the complaints towards the game are due to people being used to more modern games and finding it difficult and jarring to go back to a game that lacks many of the quality-of-life features that we take for granted in modern games.

As for playing the game on a Mac machine, there is no official way to do this. As of right now, there are no indications that Diablo 2: Resurrected would ever come to macOS or be available on cloud gaming services such as Google Stadia or GeForce Now. Because of this, the only viable method to still play this game on a Mac would be to install Windows 10 on your Mac. For Macs with Intel processors, this can be done with the help of the Boot Camp Assistant app.

Diablo Resurrected is now available to play on cloud gaming servers. This assures NO
compatibility issues while playing on your Mac as well as top-notch performance.

Before playing Diablo Resurrected make sure you get the game through the official Blizzard website. Carefully choose the battle.net platform as this will allow you to play on cloud gaming services such as Boosteriod and Geforce. Below is a link to the official website.

All you need to do now is register for Boosteroid. This allows you to add Diablo Resurrected to their Cloud Gaming Library. Once uploaded you can seamlessly play the game from your Mac.

Update: Please keep in mind we have had users mention that the game is not compatible with Parallels. The following error message appears: “Your CPU needs to support AVX instructions to run this game”

Disclaimer: Note that using virtualization software isn’t guaranteed to work in all cases, especially for gaming. You may or may not be able to get this game running on your Mac. If you want to try Parallels, then we suggest using its 14-day free trial period to figure out if this program would let you play Diablo 2: Resurrected and only then decide whether you’d buy Parallels.

How to play Diablo 2 Resurrected on Mac Boot Camp?

Now we will show you exactly how to perform the installation of Windows 10 on your Mac using Boot Camp Assistant, but before we get there, know that your Mac will need to have a considerable amount of free storage space. It’s recommended that you have at least 200 GB of free space on your Mac before you begin the process of installing Windows 10 and then downloading Diablo 2: Resurrected (which takes up about 30 GB). If you don’t have that much space on your Mac, you should first make sure to free it up.

Also, remember that your Mac should also meet the system requirements for the game (which are considerable, especially for a remaster of a game that came out more than 20 years ago). Here is the full list of the game’s requirements – it’s best if your Mac exceeds the minimum ones for a smooth gameplay experience.

Now, if you’ve made sure that your Mac has enough free space and has the hardware power to run this game, let’s get started on how to install Windows 10 and then Diablo 2: Resurrected on it.

Though these finishing steps are optional, they are still very important if you’d like to be able to get optimal performance in Windows 10, so we recommend not skipping them.

It is important to be able to easily switch between the two operating systems that are on your Mac before you try to install anything in the Windows 10 one, so here’s how to easily do this:

Going from macOS to Windows 10 – Open the Apple Menu from the top-right, and select System Preferences. Next, open Startup Disk, click the padlock in the next window, type your password, and click on Unlock. After this, select Bootcamp Windows and click on Restart.

Installing Diablo 2: Resurrected in the Windows 10 partition on your Mac

You will need to download the Windows PC version of the game in the Windows 10 partition of your Mac.