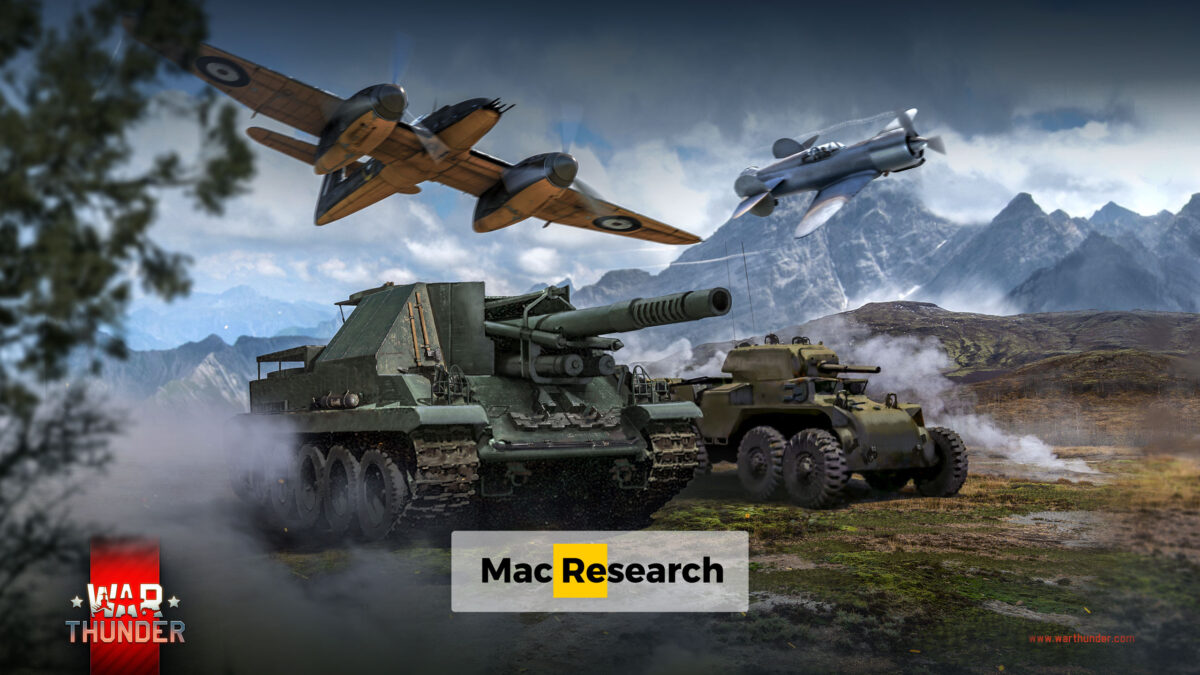 About War Thunder on Mac

War Thunder is a free-to-play MMO military game, developed by Gaijin Entertainment in 2012. The game is a flight simulator that is dedicated to aviation and armored vehicles from the beginning of the 20th century to today’s most advanced military aircraft and vehicles. War Thunder features a progression system that allows players to progress from early WW2 and Late WW2 Propellor planes all the way up to Cold War-era Jet aircraft and modern military machines.

Playing along with millions of players from all around the world, you’ll be able to take part in epic fights on land, air, and sea. Tanks, helicopters, and ships add up to the hundreds of planes that you can choose from, all of which have been meticulously handcrafted.

Players can employ all these planes and armored vehicles in three different game modes, depending on their preferences and playing style.

Arcade – is a game mode for those who just want to get on, and shoot down plenty of stuff while all players and plane types are identified with a lead indication so you know exactly where to aim.

Simulation – this is a realistic flight simulation in which players have to detect aircraft of the enemy and their friends while also participating in predetermined missions and objectives while restricted to cockpit view.

Realistic – this is the most popular game mode, where you can sink in the game’s excellent flight dynamics and put all your skills to keep an eye out for your opponents.

Today, the foundation of the game is comprised of these three modes. At first glance, War Thunder in 2022 appears to be a daunting experience for a new player, but Gaijin has included plenty of helpful clues and suggestions throughout the game to make it easier to get started. The tutorials in the game teach you the fundamentals of each vehicle type and reward you with in-game currency for completing them, which is a great touch.

Solo or with a group of friends

You can spend hours playing War Thunder, although each game typically lasts between five and fifteen minutes. It’s even better if you can get some pals to join in on the fun. You’d be shocked how much a team’s ability to work together may affect the outcome of the game. Using the in-game “Squad” system, up to four players can join a game at the same time, and your squadmates will be highlighted in green on your map instead of the customary blue. An in-game chat system is utilized to keep in touch with your friends when playing in a combo, as well as for identifying enemy positions.

In addition, you gain “Best Squad” prizes, which increase the amount of in-game gold you earn per game if you play in a team. Enabling “Automatic Squads” allows you to join in random Squads with other players, without having to lose on the fun if your friends can’t join you!

As a player, you can also join a “Squadron”, which most gamers think of as a clan. Additionally, you’ll be granted access to some great new features, such as the ability to investigate some extremely rare high-end vehicles and a fun new 8vs8 PvP mode. In this mode, yours and another Squadron are pitted against one other, which can lead to very fierce and intense combat, especially since the results are all logged and players will be eager to watch their squad rise up the leaderboard and become the game’s #1 Squadron.

It’s still as exciting to play War Thunder today as it was when it first came out. New maps and War machines for all nations and categories are released at least once every three months.

You can also participate in special missions and objectives during Gaijin’s numerous events throughout the year in order to unlock some rare premium vehicles that you can’t normally purchase.

Other than that, you can work toward unlocking premium vehicles like two tanks, one boat, and one plane via the BattlePass system and Daily Login rewards that are scattered throughout the game. So, as you can see, you’ll hardly ever be bored of this game since you’ll always have something to explore or aim at.

When you’re playing an MMO vehicle combat game, an essential element to have is the visuals. In addition to being highly accurate in terms of appearance, weaponry, and performance, vehicles are also engineered to behave much like the real thing when they are hit by enemy fire! Backbone gameplay relies heavily on the use of modules like engines, fuel tanks, control surfaces, and ammo racks.

Can you play War Thunder on mac?

This is a terrific game to play because it has a regular flow of new content, a large player community, and a lot to do in it. War Thunder has something for everyone who likes this genre of games because of its unique combination of air, sea, and land battles. The Mac version of the game is currently available, and these are the minimal requirements for running it smoothly:

How to play War Thunder on Mac

To play War Thunder on Mac, you can choose between using cloud gaming or directly installing the game on your Mac. You can play War Thunder with the Boosteroid and GeForce Now cloud-gaming platforms or download the game from its official site.

It’s easy to play War Thunder on Mac because the game has an official macOS version that you can download from the game’s site or from Steam. However, the game isn’t particularly small and if you want to save space on your Mac and/or if you don’t feel like waiting for it to download, you can instead choose a cloud-gaming option in order to play it. Another reason why you may want to use cloud gaming to play War Thunder is if you are on an older Mac that’s not very powerful. War Thunder isn’t the most demanding game (see the system requirements below), but you will still need a decent machine to run it with good performance. Depending on what Mac you are using, in some cases, it may be better to play the game through cloud gaming rather than by downloading it.

We will now show you the two cloud-gaming methods of playing War Thunder, as well as how to download the game on your Mac. Before you follow any of the instructions, however, you need to register on warthunder.com or have an active Steam account to be able to play the game (for the Boosteroid method, you must be registered on warthunder.com/have a Gaijin.net account – playing the game with your Steam account through Boosteroid isn’t an option at the moment).

Note: It is recommended to use the Boosteroid service through Google Chrome and Opera – if you are experiencing any issues, try using either of those two browsers for the best experience.

Find more details about setting up and using GeForce Now by clicking the link.

Below, we will show you how to get the game from Steam and install it on your Mac. The game can also be downloaded from its official site (which redirects to gaijin.net), so if you prefer, you can download it from there.  Before you go ahead and follow the instructions, we recommend checking out the system requirements for the game we posted above, to ensure that your Mac meets all of them.

You can run War Thunder on Mac M1 in the same ways you can run it on Intel Macs – by directly downloading the game or by using a cloud-gaming service. You can get War Thunder on your Mac M1 from warthunder.com or from Steam.

Games, such as War Thunder, that have official macOS versions can be easily played on both M1 Macs and Intel-based Macs. The only potential difference that may be noticed between the two options is that playing the game on an M1 Mac may result in better performance because of the more powerful specifications of the newer M1 models compared to their Intel counterparts. This, in turn, might mean that it would be better to play the game natively, by first downloading it, if you own an M1 Mac, as the machine wouldn’t struggle with meeting the recommended requirements for War Thunder. Still, if you wish to save up some storage space instead of filling it with a 40 GB game, then you could, of course, still use cloud gaming to play War Thunder on your M1 Mac.

How to Play World of Warships on Mac