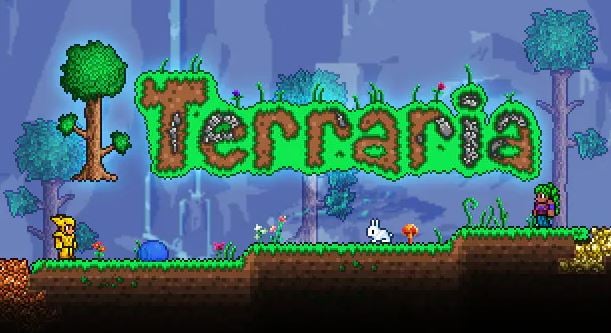 Terraria is a popular 2D action-adventure sandbox game that can be played on Mac computers. Since Terraria has an official macOS version, you can easily download it from Steam and play it on your Mac without needing to use any workaround – methods.

Terraria, developed by Re-Logic and released in 2011, is an action-adventure RPG game praised for its sandbox features and procedurally-generated world and NPCs. The gameplay revolves around combat, survival, crafting, exploration, and mining. It shares similarities with other popular games of similar genres, such as Minecraft and the games from the Metroid series. Terraria is a 2D game with sprite-based graphics reminiscent of the graphics of Super NES games.

The RNG (random number generation) factor of the game that affects a lot of the in-game world is one of the things that make this game particularly immersive and that keeps it from feeling repetitive. Throughout their playthrough, players would encounter a wide variety of enemies that are procedurally generated, obstacles, terrain, doodads, etc. ensuring that each playthrough is different and giving the game high replayability.

If you are new to RPG games like Terraria and Minecraft, you may feel like the initial learning curve is a bit steep. You are meant to use the items and materials you find to build stuff in order to progress, but the lack of a cohesive tutorial and the random pieces of advice given to you by a lone NPC that’s supposed to be your in-game guide can often be insufficient to ease you into the world of Terraria and give you a good understanding of what you should really be doing. Some may even argue that this is part of the game’s charm, being left to your own devices and learning through trial and error. After all, Terraria is all about exploration and getting better through experience. Besides, it doesn’t really take that long to get the hang of the game’s core mechanics and to learn how to use them to your advantage.

When playing Terraria for the first time, you will soon learn that everything in the game’s world is destructible and can potentially be broken down into useful materials – iron, wood, stone, etc. can (and should) be used for crafting new weapons and gear or for building sheltering structures. A large part of Terraria’s gameplay is focused on survival, and building new shelters that expand the home base of your spawn point is crucial. Another reason for the importance of having a sturdy shelter is the fall of night and the dangers that come with it. On the surface part of Terraria’s world, there’s a day/night cycle, and depending on whether it’s night or day, the gameplay conditions change. Exploration is safe during the day, and the enemies you encounter tend to be weaker and easier to deal with. The day is also the preferable time to build new houses. When night comes, more dangerous enemies start to roam around and that’s when you need to have a trusty stronghold that can keep you safe.

The house-building of Terraria expands to village/town development – with enough resources and time at your disposal, you can create small villages and later turn them into prospering towns that not only keep you safe but also attract friendly NPCs with whom you can trade and who can lend you their services, heal you, or help you in other ways.

Though the surface world has a lot of benefits, the call to adventure is sure to eventually lure you into Terraria’s underworld, where it’s far more dangerous and risky, but it’s also where you can come across treasures and rare items that cannot be found anywhere on the surface. When exploring Terraria’s underworld, you’d also be forced to engage in combat much more often, breaking the monotony of gathering resources and digging and making the gameplay experience more dynamic and engaging. Terraria has a pretty good combat system, and the complex gear-crafting system and the diversity of equipment and weapons you can use to fight off enemies make the combat more satisfying and enjoyable.

Terraria doesn’t have a specific plot or storyline – there are quests you can complete and certain bosses you can fight, but the game is as open-world as it gets and the “story” of each playthrough is the story you create for yourself by choosing how to interact with the gameplay world and the NPCs that populate it. If you are a player who values story-driven games, then Terraria may not be as appealing, but the RPG element of the game can actually make for a unique experience of creating your own personalized story that would be different for every playthrough.

Can you play Terraria on Mac?

Yes, you can play Terraria on Mac – all you have to do is go on Steam, purchase the game, and then download it on your Mac. The game has very low system requirements, so you should be able to play Terraria even on an older Mac.

Terraria was originally released as a Windows PC game but has subsequently received a number of ports for other platforms and is currently also available on Android, iOS, Xbox, PlayStation 4, and macOS. This means that Mac users can easily get the game installed and run it on their Mac computers.

Terraria is also available on Boosteroid and GeForce Now – two popular cloud-gaming services – so it can even be played remotely, without installing it on your Mac.

You can download Terraria on Mac without resorting to any complex instructions, additional software, or gaming hacks. All that you need is a Steam client where you can search for the Mac OS version of the game and install it.

Thanks to its native macOS support, Terraria can be installed on both Intel- or M1-based Macs without issues.

How to play Terraria on Mac?

To get Terraria on Mac you will first need to buy the game.

Boosteroid and GeForce Now also support Terraria in their game libraries which means that the game can be played online via cloud gaming without downloading and installing it first.

If you need more detailed instructions, please, read the following guide on how to get this game running on a Mac.

How to Play Terraria on Mac M1

Terraria can be played on Mac M1 without any problem – the game’s macOS version runs equally well on Intel Macs and M1 Macs. To play Terraria on your Mac M1 (or Intel Mac), purchase it on Steam and then download and install it. Another alternative is to stream the game directly in your browser with Boosteroid or play it via GeForce Now.

There is a difference between the methods of playing Windows-exclusive games on Intel Macs and M1 Macs because the latter lacks the Boot Camp Assistant application, which is often used by Intel Mac users to play Windows games on their Macs. However, since Terraria has an official macOS version and there’s no need to resort to workaround methods such as using Boot Camp Assistant to play the game, it doesn’t matter if your Mac is Intel-based or if it has an M1 chip. In either case, you should still be able to install it and run it without a problem.

Play Terraria on Mac with Steam

Once the game downloads and installs, you can go to Applications and start it from there.

Play Terraria on Mac with Boosteroid

Boosteroid is a cloud gaming service that makes it easy to play Terraria on your Mac without installing anything on your system. You can start the game directly in your browser, but before that, you need to create a Boosteroid account and subscribe to the streaming service. Once you do that, you can stream Terraria on Mac by clicking the Play button on the game’s Boosteroid page.

Using Boosteroid to play games online has a number of advantages. Gamers typically like the fact that there’s no need to download and install anything and they don’t have to clean physical space on their hard drive. Playing is quick and convenient, and the system’s specifics of your Mac are not a factor because the speed of your Internet connection is the only requirement for a quality gaming session.

To play Terraria via Boosteroid, you can use the instructions below:

The Past Within (Mac)