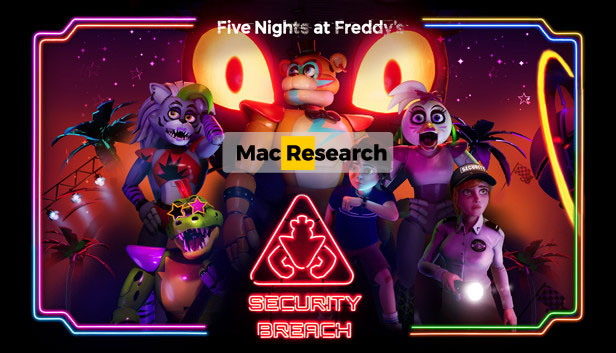 About FNaF Security Breach on Mac

FNaF Security Breach isn’t officially available on Mac, so the only viable method of running it on a Mac is to first install Windows on it. Possible variants to get Windows and run FNaF Security Breach on your Mac are through Parallels or Boot Camp Assistant.

Five Night at Freddy’s: Security Breach (FNaF Security Breach for short) is a first-person survival horror game developed by Steel Wool Studios. In the game, the player’s goal is to escape a large mall building at night before getting caught by the animatronic animals who are chasing him/her. This is the eighth and latest main installment in the long-running Five Night at Freddy’s game series. It’s also the thirteenth game that takes place in the FNaF universe. The game was released on 16th December 2021, opening up to mixed reviews. FNaF Security Breach significantly changes the gameplay formula established by the previous entries in the series by being the first FNaF game to have a conventional “free-roam” gameplay, where the player is free to walk around and explore the game’s world. In all of the previous FNaF installments, the player’s movement and interaction options were restricted to his/her immediate surroundings, and the player wasn’t allowed to walk to other locations.

This change in the gameplay style means that FNaF Security Breach comes a lot closer to a more conventional survival horror game as compared to previous FNaF installments. Depending on how you look at it, this could be a welcome change or an unnecessary departure from what gave the FNaF series its unique style and charm. In our opinion, this change in gameplay is a way to help prevent FNaF from getting stale. While the gameplay concept of the previous Five Nights at Freddy’s entries is one of the main things that gained this game series its popularity, that concept is, admittedly, very simplistic, and we believe that the new “free-roam” perspective of FNaF Security Breach is bound to bring some needed freshness to the franchise.

On the positive side, the game’s core atmosphere, character models, art, and design stays faithful to the theme of FNaF in general. In fact, the ability to freely walk around the large and very realistic mall building in which the game takes place further enhances the dread and horror elements. In addition, there’s now the element of exploration that adds to the gameplay experience, making it more engaging and immersive – something that was absent in the previous games altogether.

At the same time, mechanics from the previous games, such as the ability to look through security cameras in order to see where the enemies (called stalkers) are, make a return and are, in our opinion, well integrated into the more dynamic gameplay. Admittedly, though, it can sometimes be rather disorienting switching between your regular first-person view and the view from a security camera, especially when you’re trying to figure out the whereabouts of an animatronic stalker with regard to your own location.

Another, potentially more irritating, problem with the gameplay is the unbalanced nature of the robotic security guards. They seem to be too fast for the player to successfully escape once noticed by them, and, though they are supposed to have a predetermined movement pattern, they occasionally tend to break those patterns, which could feel unfair from the player’s perspective. When “caught” by a guard, the player could still run away, but the guard would sound an alarm that results in an animatronic stalker almost immediately spawning near the player, and if the player gets caught by a stalker, the game is over.

Speaking of this, once the player gets caught by an animatronic animal, all progress made up to this point is lost, which is a considerable loss, considering that the game can only be saved at specific “checkpoint” locations, so if you get caught just before saving your progress at a certain location, you’d start from the previous checkpoint and would need to go through all the obstacles to the next one. Some players may find this unnecessary, some will like the challenge, but after the third or fourth time of passing through the same areas just to not get caught this time is bound to quickly become frustrating and tedious.

Concerning the stalkers, they are as creepy and as eager to jumpscare you when you aren’t paying enough attention as ever. One of the main criticisms of Five Nights at Freddy’s Security Breach is exactly that – its reliance on jumpscares. However, if you are an FNaF fan, you are probably already used to them – this game series is well known for its jump scares, and it’s okay if that’s not your cup of tea, but it’s also a trademark feature of the FNaF franchise in general.

What can be improved

Really, the only truly objective problem with Security Breach, other than the unbalanced security guard enemies, is the many bugs present in the game. Though few of them are game-breaking, all of them are annoying. From random graphical glitches to AI getting stuck in random objects, it’s all there and shows that the game, in its current state, is far from properly polished. Hopefully and likely, future patches will take care of most of that, but if you get the game now and start playing it, know that you will most likely come across a glitch or two.

Can you play Five Nights at Freddy’s Security Breach on Mac?

Yes you can, however FNaF Security Breach isn’t officially playable on Mac however, it is now available on some cloud-gaming services, another option to run it on a Mac is through Windows. Using Parallels or Boot Camp Assistant it is possible to play FNaF Security Breach on a Mac.

Still, if you really want to play it but don’t want to get a PlayStation or a PC for your gaming needs, we hope that the following suggestions on how you may be able to get Five Nights at Freddy’s Security Breach running on your Mac.

Before you attempt to perform the instructions we’ve shown below, however, you need to make sure that your Mac meets the Five Nights at Freddy’s Security Breach system requirements when setting up a Virtual Machine. If you want to try the Parallels method, your machine should meet not only the minimum but also the recommended requirements for the game.

FNaF Security Breach is now available to play on cloud gaming servers. This assures NO
compatibility issues while playing on your Mac as well as top-notch performance.

Before playingFNaF Security Breachmake sure you get the game through the official websites. For the moment only the Steam version is compatible with cloud gaming services such as Boosteriod.

All you need to do now is register for Boosteroid. This allows you to addFNaF Security Breach to their Cloud Gaming Library. Once uploaded you can seamlessly play the game from your Mac, TV or Mobile Device.

Be warned, however, that since this is a workaround method of running this game on a Mac, it may not always work as intended – performance issues may be present, or the game may not even start. There’s no way of knowing for sure before you’ve tried it yourself on your Mac. The good news is that, though Parallels is a paid program, you can make use of its 14-day free trial to see if you can get Five Nights at Freddy’s Security Breach running on your Mac through the Parallels virtual machine (VM). To help you with the process of setting up the VM, below, we’ve shown detailed instructions on exactly what you’d need to do. Once the Parallels virtual machine is installed on your M1 Mac, you can then proceed to downloading and hopefully playing the game.

The Parallels variant was already shown above, so if you are interested in giving it a go, follow the shown instructions to install a Windows 10/11 VM on your Mac, and then you should be able to install the game within the VM.

The other option, the one that uses Boot Camp Assistant, is only available on Intel-based Macs, as this tool isn’t available for M1 models. The main advantage of the Boot Camp Assistant method is that it won’t require you to split your Mac’s RAM and CPU between Windows and macOS. However, it will require you to split your Mac’s drive between the two operating systems. You will need no less than 250 GB of free storage on your Mac to install Windows 10 using Boot Camp Assistant and to have enough space on the Windows 10 partition to get Five Nights at Freddy’s Security Breach installed in it. If your Mac currently doesn’t have that much free storage on it, be sure to first free up enough space (if possible) before you proceed.

If you have the needed space and want to give this method a try, follow the instructions we’ve shown below.

Now that you have Windows 10/11 on your Mac thanks to Boot Camp Assistant or Parallels, you should be able to install and run the FNaF Security Breach game from within Windows in the following way:

Mac, Mac How To, reviews