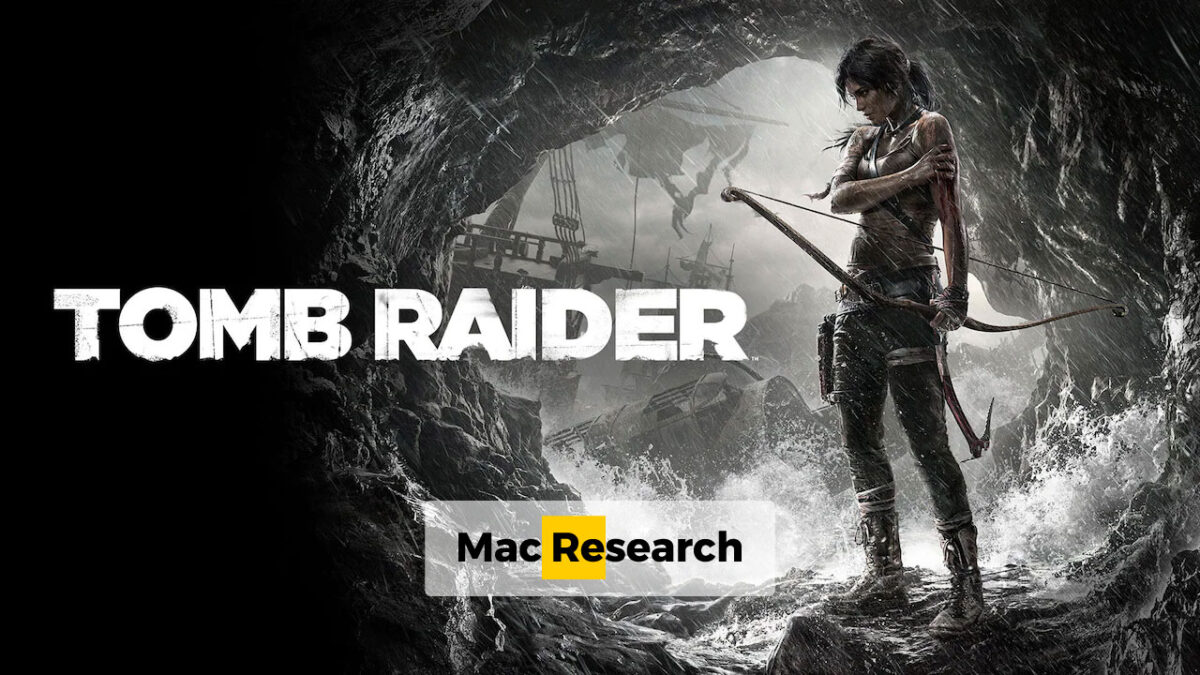 About Tomb Raider on Mac

Tomb Raider is an action-adventure video game developed in 2013 by Chrystal Dynamics. The game follows Lara Croft’s journey from a young woman to a hardened survivor. In it, you enter the role of Lara, that must unveil the terrible history of a forgotten island to escape its inexorable hold.

Shipwrecked and abandoned on a dangerous island, tested to her limits and will to survive, throughout the game, the savvy young woman grows into the Lara Croft we know and love. It’s a fantastic origin narrative, that feels both authentic and thrilling.

Lara’s epic adventure provides a good mix of exploration, riddles, and fighting. The overall good animations and satisfying gunplay for the genre add up to the player’s experience.

Fighting is fun, whether, with a bow, a shotgun, or a pistol and even though the body count is high, there isn’t too much gore. Through the entire game, the combat experience is freshened up, as Lara periodically discovers new weaponry.

It makes you feel adventurous when Lara learns new survival skills and discovers new tools. By the end of the game, Tomb Raider’s weaponry surpasses a small army’s, and she’s deadly in hand-to-hand combat. In the game, Lara needs to make the best of what she has because survivalism is the major concept of the story.

The environment through which the main character passes is equally exciting. Leaping across cliffs with a climbing ax gives you a nice thrill. As you play, you’ll have the chance to feel your heart in the throat while passing through cliff-sides, foggy mountains, and dangerous climbing ropes. These visuals are detailed and neatly designed.

The game’s secret tombs are hidden across the island for you to find. Each one comes with its own challenges and unique puzzles to solve and leads to a treasure. Lara’s passion for archaeology and curiosity about ancient civilizations shines through when she discovers artifacts and historic structures along the way.

After you complete the story, you can explore the island for lost documents, antiquities, and other treasures. Surprisingly, you will want to do this, as the map opens and the game’s locations become playgrounds, where you are free to admire their design. Unlike other action games, this one ends up looking more like a typical Tomb Raider once you finish the play.

The Game of the Year edition of Tomb Raider includes the main game and the following packs:

In conclusion, Tomb Raider is a blast of a game. Even for newbies to action games, its plot, gameplay, design, characters, and graphics all work nicely together. The gameplay is modern and engaging so it’s a good place to start for newcomers.

Can you play Tomb Raider on Mac?

Yes, you can play Tomb Raider on Mac, as long as your machine meets the minimal requirements for the game:

Please note that the online multiplayer mode is not available on macOS.

Tomb Raider is now available to play on cloud gaming servers. This assures NO
compatibility issues while playing on your Mac as well as top-notch performance.

You can go straight ahead and buy Tomb Raider from the Steam store. You can play the game right away after you have purchased it. If you feel the game graphics are under-performing, you can proceed to step two where you can upload the game to the cloud gaming library for better performance.

All you need to do now is register for Boosteroid. This allows you to add Tomb Raider to their Cloud Gaming Library. Once signed in you can seamlessly play the game from your Mac or any other device.

How to play Tomb Raider on Mac

Cloud-gaming platforms the likes of Boosteroid, GeForce Now, and Google Stadia offer Mac users a great opportunity to run all sorts of games on their Macs, including gaming titles that are not officially supported for macOS. In the case of Tomb Raider, the game does indeed include a macOS version, so you can easily download it on your Mac and start playing. However, if you want to also play other games, ones that are not supported on Mac, you will still need to resort to workaround methods to run them on your computer. A service such as Boosteroid can allow you to play both Tomb Raider and any other game (both titles supported and not supported on Mac) included in its library, directly from your Chrome or Opera browser. In addition, as stated earlier in this article, the Mac version of the game lacks the multiplayer mode of Tomb Raider, so won’t be able to play it online. If you are interested in trying cloud gaming to play Tomb Raider on your Mac, check out the following instructions for Boosteroid and GeForce Now. If you want to install the Mac version of the game and play it this way, you will find direct installation instructions further down this post.

The process with GeForce Now is almost the same – the only difference here is that you have the option to use the service for free (albeit, with some substantial limitations) and that you will need to first download the free GeForce Now client, as the service cannot be used directly from the browser (unlike Boosteroid). For a detailed guide on setting up GeForce Now and playing Tomb Raider on your Mac with its help, go to this page, where you will find the necessary instructions.

Note that GeForce Now allows you to play Tomb Raider through both Steam and Epic Games Store, so if you own the game on Steam and want to play it through a cloud-gaming platform, you should use GeForce Now.

If you want to get the game on Steam and download its macOS version on your Mac, follow the next guidelines:

If you want to play Tomb Raider in its multiplayer mode, you won’t be able to do so through its macOS version. The only way to download the Windows version of the game is to first install Windows on your Mac, either using Parallels or using Boot Camp Assistant. If you don’t want to go through the complex and time-consuming process of getting Windows on your Mac just so that you could play Tomb Raider in multiplayer, you should be able to play the game online through either of the cloud-gaming platforms mentioned on this page. Note, however, that your Internet would need to be very stable and with an above-average speed in order to get good performance in multiplayer.

Since Tomb Raider is officially supported for Mac systems, playing the game on both Intel-based Macs and M1 Macs is as easy as downloading a regular app and installing it on the computer. Of course, as noted above, the game would take a considerable amount of space on your Mac’s drive, so this must be taken into account before downloading the game.

Additionally, cloud gaming is also an option for Mac users, regardless of whether they own an Intel or an M1 Mac model.