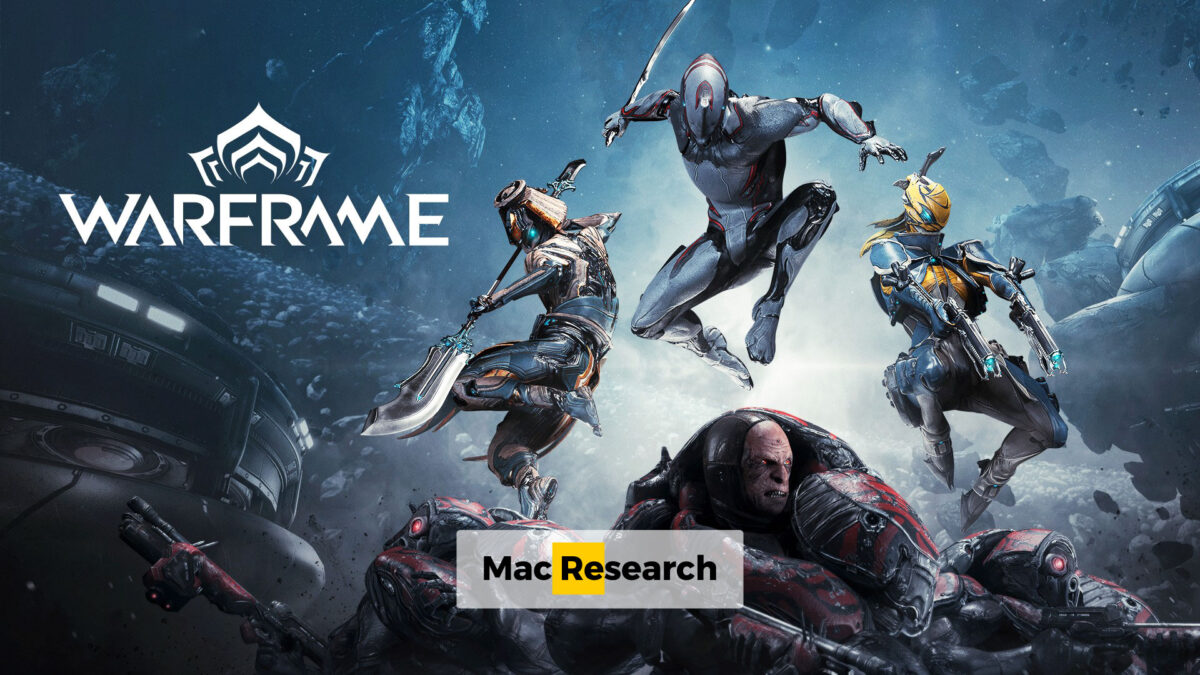 About Warframe on Mac

Warframe is a stunningly crafted free-to-play action game with endless replay potential. Players can dive into the game’s Mission-based progression, full of intense multiplayer fights, and stunning sci-fi visuals. Developed by the Canadian video game developer Digital Extremes, Warframe has been around for nearly nine years. As a result, newbies can enjoy rich content, despite its grind-heavy free-to-play nature. The late-game content, which contains MMO-style tasks like fishing, animal trapping, and mining, is a significant switch from Warframe’s main action-game focus. Still, if you want to experience thrilling moments, don’t skip to check it out.

You start the game as Tenno, a character, psychically linked to Warframe as a biomechanical surrogate body. These augmented bodies are capable of superhuman strength and acrobatic feats. Being in control of such a sci-fi ninja, your on-screen actions include hacking, slashing, and shooting dangers to the galaxy. The prize is loot used to upgrade your arsenal, Warframes, and, of course, your appearance.

Warframe is a mission-based game where you travel to numerous planets to combat genetically enhanced humanoid warmongers, enormous robots, and other enemies. There are missions to kill targets, save NPCs, collect items, and fight major characters. In practically every mission, your Warframe slashes, dices, and blasts any grunts in your way. But there is some plan to it. Each level has settings with multi-level architecture and alternative paths, allowing you to choose whether to enter into a battle or tiptoe through stages to dodge alarms and put your stealth skills into use.

Unique Warframes can be unlocked through completing different missions and grinding Warframe blueprints from special enemies and bosses. As you progress further in the game, you unlock mods that greatly boost your capabilities.

The game also has four elemental damage types: cold, heat, electric, and toxin. These do more than just damage; they combine to form six sub-elements with specific offensive abilities.

You can go on adventures, fight tougher mobs, complete bounty quests, and collect resources. The latest expansion of the game introduces Deimos – a beautiful extraterrestrial landscape full of different beasts to hunt and farm. You’re encouraged to mine, fish, and fight to appease the Entrati, the region’s infested family.

The new expansion also introduces the Helminth, a phallic creature that eats components but lets you alter your Warframe’s abilities.

Being able to change and tweak your Warframe’s abilities at the end of the game is huge. It takes a day for the Helminth to consume a Warframe for its ability, thus optimizing your Warframe to this degree comes at its cost.

Warframe is a time-suck game with slick action and fantastic sci-fi visuals. You can hop in, spend as much time as you like on missions, and improve your Warframes.

The co-op gameplay mode allows you to play along with friends and win additional Rewards by completing Missions together. Warframe Abilities allow you to heal teammates, redirect enemy fire, and accomplish goals. If you are stuck on a particular challenge, the in-game matchmaking connects you with friendly Tenno anytime you need help.

The game allows you to complete ground-based missions or take your Warframe to the stars and engage in enormous ship-to-ship battles aboard your very own customizable spacecraft. Once you start, you can dive into a system, rich with interesting lifeforms, both friendly and malevolent. The cinematic narrative is offering 5 unique expansions and 30+ story-based quests.

Once you enter the Origin System, you’ll be joining legions of friendly Tenno with their own Warframes, weapons, and gear. The Starter Weapons at your disposal are only at the beginning of the game. The further you play, you get the chance to create hundreds of devastating weapons, vehicles, and Companions.

You can level them up and experiment until you find the perfect gear combo for your playstyle. There are also settings that allow you to customize your weaponry to match your personalized loadout. After you’ve mastered the in-game mechanisms, you’ll probably find the gameplay incredibly deep and creative. Just keep in mind that Warframe may include content not suitable for all ages or for viewing at work since it contains violence, gore, and general mature content.

Can you play Warframe on Mac?

Warframe is only supported on Windows, PlayStation, and Xbox. Mac OSX is not supported. But it is possible to play Warframe on Mac. If you stick with us, we may be able to help you run the game on your Mac, so just keep on reading.

How to play Warframe on Mac

To play Warframe on Mac, your best option is to use a cloud-gaming service – the game is currently available on GeForce Now. Alternatively, you can also try to download and play Warframe on your Mac by first installing Windows on it.

To play Warframe as a Mac user, the easiest and most streamlined option is to use cloud gaming. Warframe lacks a macOS version, so you cannot directly download the game in your macOS and start playing it this way. Using a cloud-gaming platform, such as GeForce Now, however, can let you play Warframe on your Mac without even needing to install the game. You just need to be registered on the cloud-gaming platform’s site and have the GeForce Now app on your Mac. Since Warframe is a free-to-play game, you won’t even need to purchase it in order to play it.

To download Warframe on Mac, your Mac would first need to have Windows installed on it. The methods of installing Windows and then downloading Warframe on a Mac are two – the first one is to use Parallels and the second one is through Boot Camp.

Since Warframe isn’t supported for Mac systems, the only way you could get this game downloaded onto your Mac in a way that would allow you to play it is if you download it within a Windows environment. It is quite possible to install Windows on your Mac, but it would require some time and effort to do it.

The two mentioned methods of installing Windows have some pretty significant differences and the one that would work best in your case depends on factors such as your Mac’s model, how powerful the computer is, and how much free storage it has at the moment. In general, the Parallels method is the recommended one, but it works better on Macs with lots of RAM and CPU cores, so, in general, users with newer Macs would benefit more from it. On the flip side, the Boot Camp method can only be used on Intel-based Macs and its RAM and CPU requirements are a bit lower, so it may be the better option for older Macs. In either case, the minimum system requirements for playing Warframe must be met, and in the case of Parallels – exceeded.

Here is a brief explanation of the two methods that you can use to get Windows on your Mac:

Before you try to use GeForce Now for playing Warframe, note that cloud-gaming services, in general, require a stable and fast Internet connection to get the best gameplay experience possible. This is especially relevant when trying to play a multiplayer game such as Warframe through a cloud-gaming platform – you will need good Internet in order to play the game without lag and with good latency. Now, if you want to learn how to set up your GeForce Now account and how to use the service, follow the next steps.

We have a more detailed guide on how to use GeForce Now, so click on the provided link if you’d like to have a look at it.

To learn more about the process of installing Windows 10 on your Mac through Boot Camp Assistant, go to this page.

Warframe can be played on Mac M1 if you are registered on a cloud-gaming platform that has the game in its library. It’s also possible to play Warfram on Mac M1 by using Parallels to create a Windows 11 virtual machine.

Of all the methods for playing Warframe on Mac that we have shown on this page, the only one that wouldn’t work on an M1 Mac is the Boot Camp Assistant method. Due to a difference in the architecture of Intel CPUs and M1 chips, the Boot Camp Assistant app doesn’t work on M1 Macs and is, therefore, not available for them. You could still, however, use Parallels to set up a Windows 11 virtual machine on your Mac and run Warframe through it or, better yet, use one of the suggested cloud-gaming options to play the game without even needing to have it installed on your Mac.

Play Shadow of the Tomb Raider on Мac Tutorial