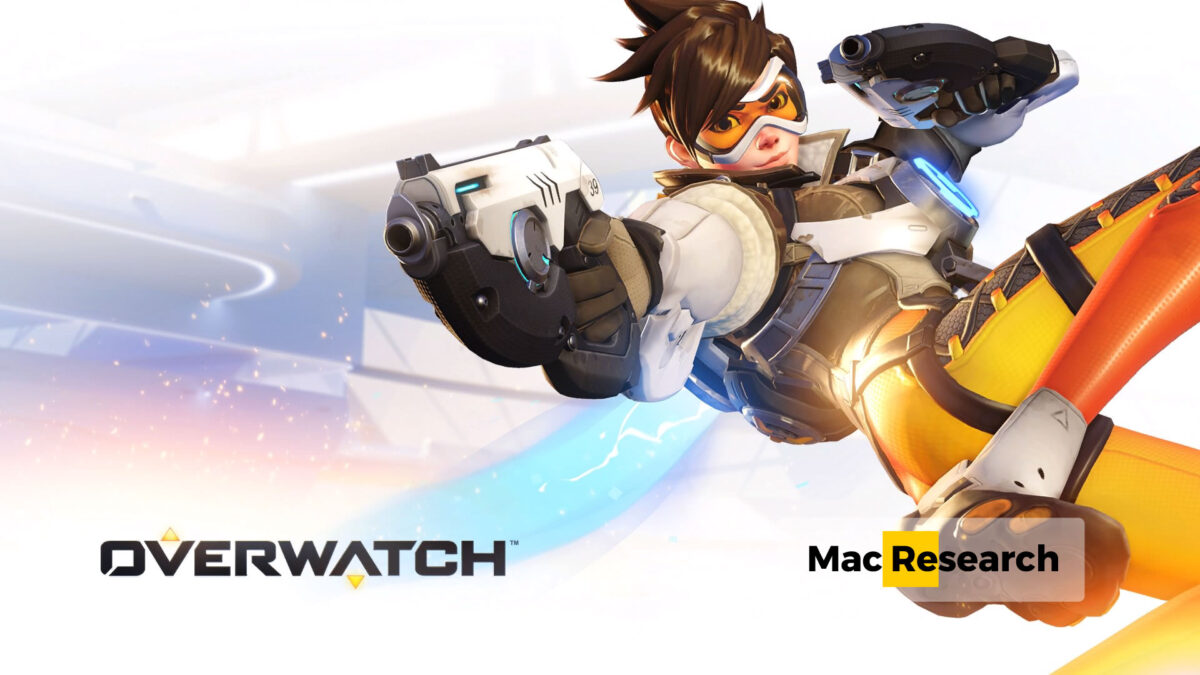 How to play Overwatch on Mac

UPDATE 05.10.22: Overwatch has been discontinued in favor of its sequel, Overwatch 2, for which we have a separate page. If you want to find out how to play Overwatch 2 on any mac, you can find our guide here.

Can you play Overwatch on Mac?

Yes, Overwatch can be played on a Mac. Unfortunately, the game still does not have full support for Mac users. However, the instructions that you will find below will show you a roundabout that may help you run Overwatch on your Mac and enjoy it.

About Overwatch on Mac

Overwatch is a multiplayer character-based shooting game developed and published by Blizzard Entertainment in May of 2016. The game provides a one-of-a-kind and entertaining gaming experience that takes you to a future version of our own planet. The gameplay combines MOBA-style heroes with an objective-based first-person shooter to create something unique. The three main roles that are available are tank, damage, and support. Each hero has unique powers that are geared to their specific function. The game has a steep learning curve, but it provides hours of fun for those who are able to overcome the first difficulty.

During the game, 12 players battle against each other in two teams to complete whatever objective the map sets forth for them. Each character belongs to a broader category but is otherwise distinct from the others. Weapons, skills, ultimates, and even movements are all tailored to that particular hero’s playstyle. The objectives are right out of the playbook of a class-based shooter, with nets you points to attack and defend to achieve victory. Characters, on the other hand, have powers that are unique to them and represent their style and personality. In addition, certain skills have cooldown timers that vary based on their power and usefulness.

A variety of heroes are available at the start of the game. You can choose from characters who increase map visibility, absorb incoming damage with shields, and drop armor for teammates to pick up. There are characters who place traps, debuff, or stun enemies, amongst other things. Other options that are available to players in the game The usage of a jetpack, the ability to teleport to great distances, or to improve movement speed for every teammate inside an area of effect are all. It’s a wide and diverse selection of characters to play with that come with a range of styles and talents. Most firearms require reloading, but they have an endless supply of ammo from which to draw, so there is no end to the shooting thrill.

It is a necessary part of the Overwatch game experience to become familiar with the characters, their abilities, and how to counter them. This can be both gratifying and frustrating at the same time.

The formation of a team is critical since there are so many heroes to pick from and only six players per team. Of course, after a few hours in the game, the experience will come into play, and you’ll have a better sense of the most effective combinations. During the opening stage of a battle, before the match has begun, the entire team gathers around the character selection screen, picking heroes as a tooltip criticizes the oversupply of snipers or the lack of support. Then, when the team is formed, the match starts.

The Maps where the shooting happens are generally pleasing to the eye, with an interesting flow of chokepoints, corridors, open areas, and alternative routes. There are Maps that are designed for specific types of heroes – whether it is a wide main corridor for the lumbering tanks, narrow flanking routes for the squishy attackers, or balconies for the heroes who can climb, fly and clamber.

A dialogue wheel, which allows you to call out relevant information, can be used to assist single queuers in communicating. Things like: “get on that goal”, “group up with me”, or, the most frequently heard of all, “hello” are all common in there. Although it is one of the more functional interface elements, the icons and messages are sometimes overshadowed by the acoustic and visual bombardment that is happening on the screen.

Overwatch appears to be a thrilling experience when played. Matches are a dazzling display of effects, with weapons exploding and talents kicking in. Expect the first few hours to be overwhelming as you discover what each of the effects means and why you were just killed by that specific effect.

It also sounds fantastic. When it comes to diving into the atmosphere, the audio design actually delivers more than visual design. Each character has their own set of phrases that they use for the majority of their conversations, which helps you stay on top of the present situation. The presence of enemy barks is more noticeable in the mix, which alerts you to the presence of potential danger.

Should you give it a try?

Overwatch is bright, vibrant, and eccentric game, with a cast of characters that includes lovable rogues, gruff villains, and over-the-top heroes, among other things. It’s a jumble of diverse elements. In one team, there might be a gorilla, a blue assassin, a cowboy on horseback, a cyborg ninja, and a teenage Starcraft pro in a pink mech, among other characters. It’s a diverse cast, and yet one that feels coherent inside the super exaggerated, cartoonish atmosphere.

Everything is brought together by a plot involving futuristic terrorism, robot revolutions, and a gang of heroes that have been disbanded. For the most part, this story is recounted from the outside, in the form of comic books and short films. It appears to be an afterthought to the activity. There is a cutscene at the beginning of the game that gives you the basics of the story. Overwatch is a fantastic shooter that is filled with innovative and clever design decisions.

How to play Overwatch on Mac

Overwatch isn’t among the games that are officially supported for Mac systems, and so, in order to be able to play it on a Mac, you will have to utilize some sort of a workaround method. The easiest way to get Overwatch running on your Mac is to start the game with Boosteroid. Boosteroid is a cloud-gaming platform that will let you play Overwatch directly from your browser (Chrome, Opera). This circumvents the whole issue of the game not being supported for macOS because, while playing it on Boosteroid, Overwatch would really be running on a remote gaming PC server that would be connected with your Mac, which is how you’d be able to see and control the gameplay.

Before we show you how to use Boosteroid to play Overwatch on your Mac, we must point out that, in order to play any game through this service with a decent performance, your Internet would need to be fast and stable. An ever better Internet connection is required if the game you want to play is a multiplayer one (such as Overwatch). If your Internet connection isn’t very good, you will not be able to reliably play Overwatch due to lag and high latency.

As mentioned above, an alternative to the cloud-gaming variant is to get Windows installed on your Mac and then download the Windows version of Overwatch. This process requires more time and effort but has the advantage of not needing nearly as good an Internet connection as the one you’d need to play Overwatch through Boosteroid.

We will explain both of those methods below, but before you try them, you will first need to purchase Overwatch. To do that, you must first create a Battle.net account, and then go to the game’s official site and purchase its PC/Battle.net version from there.

Before playing Overwatch make sure you get the game through the official websites. For the moment only Battle.net is compatible with cloud gaming services such as Boosteriod.

All you need to do now is register for Boosteroid. This allows you to add Overwatch to their Cloud Gaming Library. Once uploaded you can seamlessly play the game from your Mac, TV, or Mobile Device.

A Parallels virtual machine for Windows is easier to set up than installing Windows through Boot Camp, and it generally offers better performance on most systems. However, if your Mac isn’t particularly powerful, it may be better to opt for the Boot Camp Assistant option, although you mustn’t forget that your Mac still needs to meet the minimum system requirements for the game.

We will show you a quick guide for both options down below and provide you with links to more in-depth instructional articles on how to use Parallels and Boot Camp Assistant for installing Windows on your Mac.

How to install Windows on Mac using Parallels

Here are the detailed instructions for setting up a Parallels virtual machine.

How to install Windows on Mac using Boot Camp Assistant

You will find our full Boot Camp Assistant guide on the linked page.

Overwatch can be played on Mac M1, but only if you utilize workarounds such as using cloud gaming or installing Windows on your Mac. If you want to install Windows to play Overwatch on your Mac M1, you will need to use the Parallels virtualization software.

M1 Macs can only get Windows installed on them through Parallels or another virtualization program because the Boot Camp Assistant app isn’t available for them. This is one of the reasons why Parallels is particularly popular among Mac M1 users who want to play Windows games on their machines. Another reason is that Parallels receives frequent improvements that enhance its ability to provide Mac users with a good gaming experience. There’s even a setting that allows you to optimize a Parallels virtual machine specifically for gaming.

That said, the cloud-gaming method of playing Overwatch on a Mac (be it an Intel-based one or an M1 model) still remains the most straightforward and streamlined option. As you’ve probably seen above, all that it takes is for you to register on the site of Boosteroid and get a paid subscription, and you’d then be able to start playing Overwatch directly from your Chrome (or Opera) browser.

How to Play TheHunter: Call of the Wild on Mac