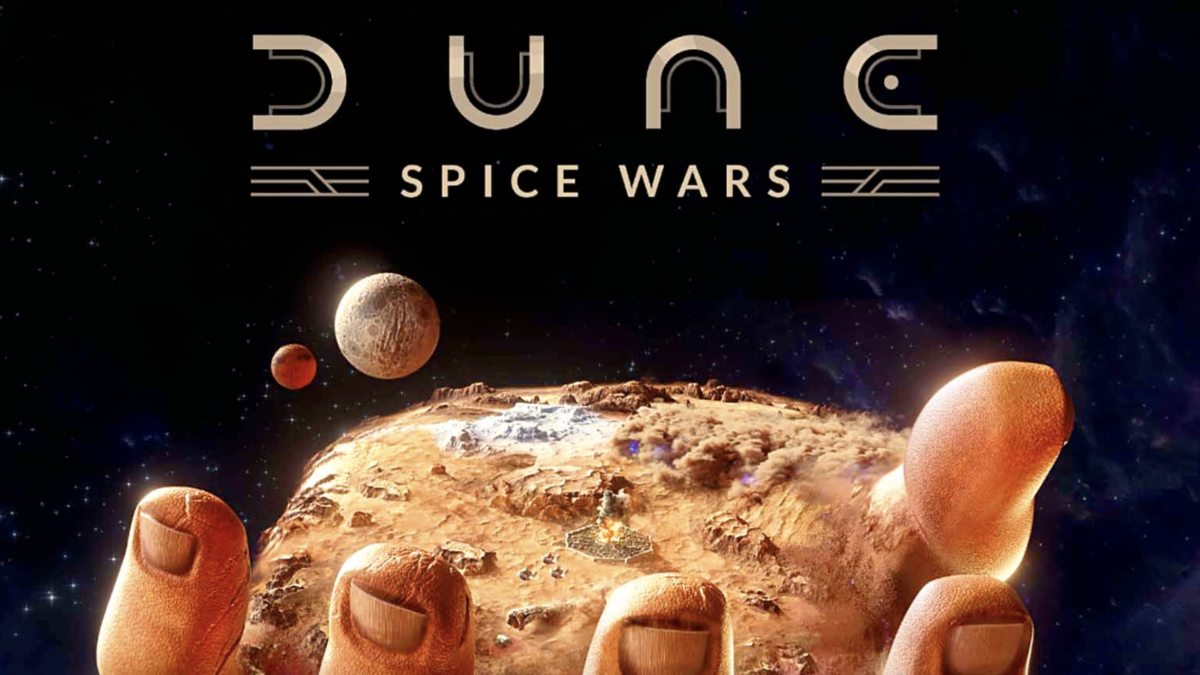 Dune: Spice Wars is a real-time 4X strategy game that can be played on Mac only with the help of workaround solutions, such as Boosteroid. Dune: Spice Wars is not officially available for macOS systems, so you can’t natively play it on Mac.

Dune: Spice Wars is a recently-released strategy game that combines the RTS and 4X genres and puts the player in the sci-fi setting of Dune. You may be familiar with the Dune books and movies, or even the older Dune games, and if you like this setting, Dune: Spice Wars offers more of this iconic sci-fi world, faithfully recreating the Dune universe.

Although the game is still in early access and lacks a full-fledged campaign and multiplayer mode, it has already accumulated a considerable number of players and seems to be one of the few modern RTS games that are actually done well. Unfortunately, if you are a Mac user who wants to try out Dune: Spice Wars on their Mac, you won’t be able to play the game natively. The good news is that there are quite a few workaround options that can allow you to enjoy this game on your Mac, and we will go over them in the second half of this article. As for now, let us tell you a bit more about Dune: Spice Wars and the things we believe make this game a worthwhile experience.

Over time, the Real-Time strategy has steadily fallen into obscurity, with only a few RTS titles such as Starcraft 2 and Age of Empires 2 and 4 still being relevant. On the other hand, 4X (Explore, Expand, Exploit, Exterminate) strategies seem to be at the height of their popularity. Dune: Spice Wars falls into this category of 4X games, where the focus is on carefully planning your long-term strategy and methodically executing it while paying close attention to the territories surrounding your cities and the availability of different types of resources. However, unlike more conventional 4X games, where the map is segmented into hexagonal tiles and the gameplay is turn-based, the map in Dune: Spice Wars doesn’t have separate tiles and the game is always played in real-time with the option to pause the action when you need some additional time to plan ahead. This makes for an interesting hybrid type of gameplay that features both the long-term methodical planning, typical for 4X games and the micro-management-intensive and action-oriented gameplay of an RTS. Depending on your personal preferences, this may or may not be for you, but we do like the combining of these two types of strategy gameplay styles, which, in our opinion, is well-executed and polished in Dune: Spice Wars.

One of the coolest aspects of Dune: Spice Wars is that the environment itself is as much of a threat to your cities and economy as are the enemy factions. The planet of Arrakis (Dune) primarily consists of barren wastelands and deserts, where the all-important “Spice” resource is both scarce and in very high demand, forcing you to fight tooth-and-nail for it against the opposing factions. When you start a regular game in Dune, all that you initially have at your disposal is your main city and a scout unit that you must immediately start using in order to explore the map, find nearby resource patches that you can gather, and neutral cities you can either take over using military force or via diplomacy.

Additionally, while the planet of Arrakis may be scarce in resources, it makes up for it by offering plentiful environmental hazards, such as devastating sandstorms or huge earth-worms that can appear at any time in any place and cripple your entire economy or destroy a large chunk of your army in a matter of seconds. This adds a fun new mechanic to play around with and to consider both when building up your economy and when engaging in battles against other factions.

Finally, Dune: Spice Wars also requires you to consider the location where your cities are built, which directly affects the efficiency of resource-gathering buildings. Resources like water and food are generated by buildings in your cities, but how efficient those buildings are is directly tied to where the city they are in is located. For instance, how windy a given location determines how efficient your water-gathering buildings are. Other similar dependencies and correlations play an important role in Dune: Spice Wars, further increasing the amount of strategical planning required by the player.

Expansion and conquest should be your goal in Dune, but remember that the more you expand and the more you evolve your cities, the higher their upkeep cost would become. Yes, in Dune: Spice Wars, when building something new or annexing a new city to your faction, you don’t simply spend some resources as a one-time investment, but rather need to periodically spend resources as an upkeep cost. This adds an extra element of resource management and long-term planning, as you may often find yourself unable to support your own expansion with the resources available to you at the moment. This additional layer of complexity is both realistic and fun to play around with, as it introduces a new dimension to the gameplay that’s oftentimes overlooked in other strategy games.

Another aspect you must take into consideration are the aforementioned earth-worms – those gargantuan creatures get attracted by the sounds made by your Spice-gathering equipment as well as by skirmishes and battles, meaning you need to be constantly on the lookout for potential earth-worm attacks or else you may sustain considerable economical and/or military losses. On the other hand, you can be cheeky and make potentially make it so that an earthworm gets lured to the location where you are fighting an opposing force, only to withdraw right before the creature surfaces and attacks your enemy’s army.

Even though the game has not yet been fully released, even in its early-access version, the game looks and feels very polished and well-made. The combination of 4X and RTS makes for engaging and diverse gameplay, that requires you to pay attention to both the micro and macro-management of your army and economy. Admittedly, this hybrid type of gameplay lacks the intricacies and complexity of other titles that are dedicated to either strategy game genre, but it makes up for it with cool features such as the hostile environment, the constant upkeep cost, and the importance of the cities’ locations in relation to the efficiency of resource-gathering buildings.

Really, the only gripe we have with the game thus far is that its vibrant and picturesque art style doesn’t seem to match the gritty and harsh atmosphere that the Dune universe is known for from the Dune books and movies. That said, the game looks pretty and is aesthetically pleasing, so this isn’t any serious downside, but rather a minor nitpick.

In conclusion, if you are a Dune fan or like RTS or 4X strategy games, you may want to give this one a try, and if you wish to learn how you can play the game on Mac, be sure to check out the instructions we’ve provided right below

Can you play Dune: Spice Wars on Mac?

Unfortunately for Mac users who are fans of Dune and RTS games, Dune: Spice Wars is currently unavailable for macOS systems, and it doesn’t seem like this would change anytime soon. On the plus side, there are no fewer than four alternative methods of playing Dune: Spice Wars on a Mac, and each of those methods will be shown and explained in the next lines. Admittedly, the gameplay experience may not feel as polished as playing the game natively on a Mac. However, each of the variants we are about to present to you are viable options for playing Dune, and they can still provide you with a way to enjoy the game and get a pretty good performance on a system that the Dune: Spice Wars doesn’t support.

How to play Dune: Spice Wars on Mac

We typically advise Mac users who want to play a game that’s unsupported for macOS to first try the cloud gaming variant. Cloud gaming services allow you to stream different games from souped-up gaming rigs to your Mac so that you can play the game from your Mac while running on a gaming PC. The advantages here are that this method is very easy to set up, it doesn’t require you to actually download the game, and the gaming performance won’t depend on your Mac’s specifications. The downside is that you’d need to be constantly connected to an Internet that’s both stable and fast, or else you may experience dips and performance due to lag. This is why we will first show you how to play Dune: Spice Wars using Boosteroid and GeForce Now – two popular cloud gaming services.

If you’d rather have the game downloaded on your Mac, you can skip this part and go straight to our instructions on how to download Dune: Spice Wars on your Mac.

How to Get Dune: Spice Wars on Mac:

Now you will need to register for Boosteroid. This allows you to add Dune: Spice Wars to their Cloud Gaming Library. Once uploaded you can seamlessly play the game from your Mac, TV, or Mobile Device.

How to play Dune: Spice Wars on Mac using Boosteroid

For a more detailed explanation of how to use GeForce Now, you can visit this page.

Both of those methods have the same goal – to allow you to download and play a Windows game – but they achieve it in different ways and thus have different pros and cons. We’d generally recommend that, if you are using an Intel Mac, you opt for the Boot Camp variant, and if you own an M1 Mac, you go for the Parallels method. Here is a brief outline of the steps required for the two methods, but you can also view a more detailed guide for each by following the respective link included below.

The two cloud gaming options for Dune: Spice Wars that we showed you earlier – Boosteroid and GeForce Now – can both be used on M1 Macs and on Intel Macs to play the game. The Parallels variant is also a viable option for M1 users that they can use to play Dune: Spice Wars and this method may even perform better on M1 Macs when compared to Intel Macs. The only method we’ve included on this page that’s exclusive to Intel Macs is the Boot Camp Assistant one. It cannot be used on Macs with M1 chips because Windows 10 is not compatible with the M1 architecture.