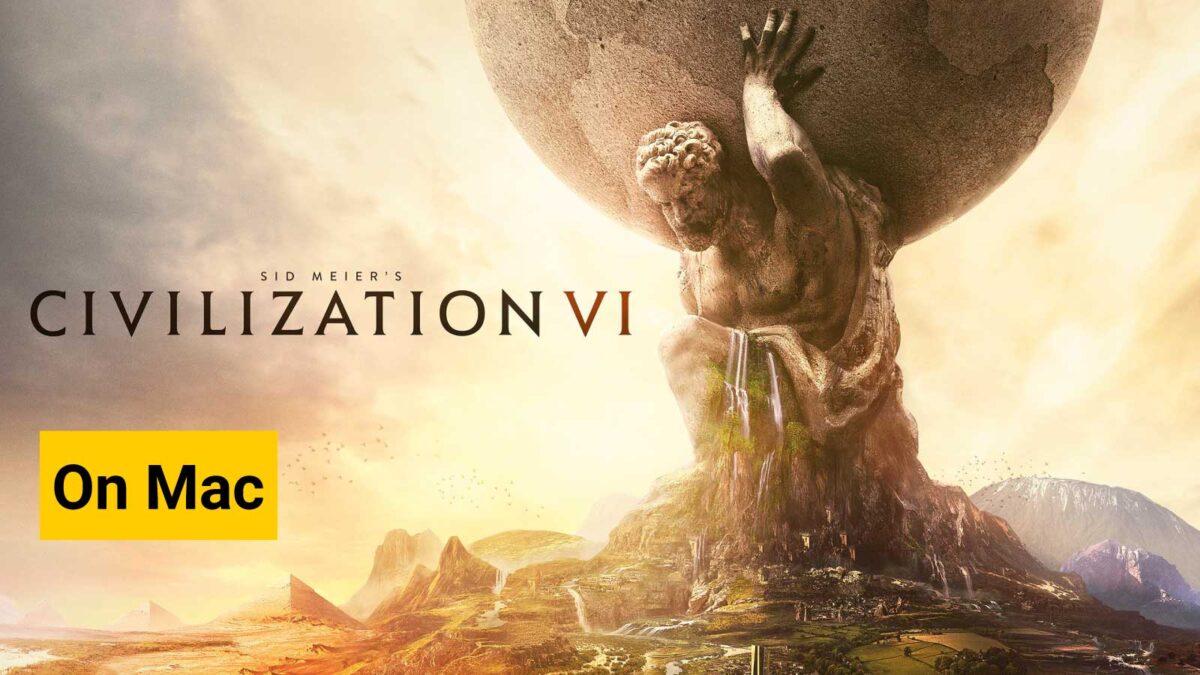 About Civilization VI for Mac

Civilization VI is a 4x strategy game available for Mac, in which you play as the leader of a civilization, seeking to develop and expand it through the ages. Civilization VI for Mac can be purchased and downloaded from Steam and Apple’s App Store.

4x games (Explore, Expand, Exploit, Exterminate) are a type of strategy games that focus on the “larger picture” by giving you a lot of control over many different aspects of your faction or, in this case, civilization. Unlike RTS (Real-Time Strategy) games, where you are given more immediate control over each of your faction’s units and where the scope of the game is narrower to accommodate this more dynamic style of gameplay, 4x games, such as Civ 6 are usually turn-based and, therefore, more laid-back, allowing the player to carefully consider their next move after taking into account a large number of factors and variables.

A long-term strategy is at the forefront of the gameplay style in games like Civilization, where the player must decide how to build his/her cities, what technologies to research, what kind of diplomacy approach to adopt towards other players, and many more. All of this can be quite overwhelming, especially for newer players, but after some time spent getting used to the game’s mechanics, this type of gameplay can get quite addictive.

Sid Meier’s Civilization franchise, in general, and Civilization VI, in particular, is one of the brightest, best-known, most and highly-regarded examples of this type of 4x, turn-based strategy games. In any of the games from this franchise, the player is given control of a civilization that starts off as a small settlement, and it is the player’s task to gradually evolve this settlement into a developed and powerful civilization that can dominate over the other player’s civilizations in order to achieve victory. Earlier installments of Civilization had fewer and simpler victory conditions, the most obvious of them being military domination over the other factions. Later installments added other victory conditions such as cultural influence, technological superiority, and, with Civ 6, religious victory.

It’s certainly not a type of game that’s or everyone due to its steep learning curve and the large time investment required to familiarize oneself with the numerous mechanics of the game if you are a newcomer to 4x games. Still, for people who enjoy this type of strategy, Civilization certainly has a lot to offer.

Now, focusing specifically on Civilization VI, which came out back in 2016, developed by Firaxis Games, and published by 2K games, it is often praised by many to be the installment of this franchise that brought along the biggest number of innovations and improvements compared to its predecessors. I will briefly go over the most important of them, but it’s safe to say that, in spite of its flaws (no game is objectively perfect), it is certainly a big (and logical) step forward for the entire franchise and, therefore, deserving of the praise it’s been receiving ever since its release.

One of the best-received changes that come with Civilization VI is the introduction of districts. In earlier installments, a city would take only a single tile on the game’s map, meaning that all of that cities’ buildings would be stacked on that single tile, which, in hindsight, seems to have been a missed opportunity for more strategy-focused and well-rounded gameplay. With Civ 6, however, a city would expand to nearby tiles on which the player would build different types of Districts, with each District type supporting different buildings.

For instance, in order to build science-based buildings, the player would first need to build a campus District. However, since different buildings benefit from different types of land, the player needs to use forethought to make the best decision where to build a certain type of District. This seemingly simple change makes the gameplay of Civ 6 more nuanced and diverse, and also increases the importance of being strategic with regard to both your short-term and long-term goals and the correlation between them.

Although the scope of the Civilization games has always been broader compared to most other gaming genres, including RTS games, combat and military victory have always been at the center of earlier Civilization installments. As we said above, later games of this franchise have added new and more nuanced victory conditions, with Civilization VI being the most well-rounded in this regard. In addition to the already familiar Science, Culture, Domination, and Score victory conditions, Civ 6 adds Religion as yet another way to win at the game.

The goal here is to make the religion of your civilization predominant in all other civilizations by converting more than 50% of its cities to said religion. Some players and critics have expressed dissatisfaction with this win condition due to how difficult it is to achieve and the lack of nuance in the mechanics to achieve it. Still, it adds more variety to Civilization VI and, furthermore, there’s always the option to simply turn it off in the game’s settings before you start a new game. On a related note, the Gathering Storm expansion for Civ 6 adds Diplomacy as yet another victory condition.

The game’s tech tree has also been revised – the active research system in Civilization VI helps boost advancements if the player has access to appropriate resources or if they have already researched a certain precursory type of technology. In addition, the Eureka Moments feature can further increase the speed of a player’s progress if certain specific tasks (similar to optional quests) are completed.

The Civics tree is another improvement that comes with Civ 6 and this one has been introduced to address the difficulty in achieving a Cultural victory that was present in the previous games. Rather than having the cultural improvement researches be a part of the Technology tree, the Civics tree feature turns cultural development into a separate mechanic, where completing certain Civics would unlock policy cards that can be used to provide boosts for the civilization (but could also apply certain limitations).

The last major change I’d like to mention is concerning the AI of the game, which has definitely seen some improvement to make Player vs Computer gameplay more engaging. In Civilization VI, the AI would have specific agendas that affect its actions, research choices, diplomacy, policies, and attitude towards the player. In general, this makes playing against a computer more interesting and diverse, while at the same time the agendas feature gives context to the decisions made by the AI, so that they are more logical and less random. However, despite this, playing against an AI is still not that great and can quickly get tedious. On lower difficulty, the computer doesn’t put up too much of a challenge and on a higher difficulty, the AI would “cheat” to the point of becoming unfairly difficult to beat instead be more genuinely “intelligent”.

In general, the main draw of the game remains its multiplayer, with its single-player still needing major improvements.

Every game has its flaws, and Civilization VI is no exception. In addition to the criticism directed at its Religious victory mechanic and its unbalanced and not very good AI, other problems with the game that get pointed out are its clunky and confusing interface (that doesn’t seem to have improved during the 5 years that have passed since the game’s release), the bugs that it still seems to have, as well as the lack of well-balanced gameplay. Of course, opinions and experiences differ from one individual to the other, so many of the above-mentioned issues may not affect your enjoyment of the game as much as they may have for other people.

4x strategies are, in general, not as intuitive as most other types of computer games and so if you’ve never played such a game before, you may feel a bit overwhelmed by Civilization VI due to the sheer amount of new information that you’d have to take in. Still, after a while, if you are patient, you will almost certainly come to enjoy and appreciate the intricate and nuanced mechanics of the game to the point where you end up spending hours on end playing for “just one more turn”.

On the other hand, if you are familiar with this type of game and with the Civilization franchise, but haven’t played this particular installment, there are a lot of new additions and innovations to be seen here, but depending on your personal preferences, some may be more enjoyable than others.

How to play Civilization 6 on Mac

To play Civilization VI on Mac, you can go to either the Mac App Store or to Steam, and purchase the game. After that, all you’d have to do to play Civilization on your Mac is download and install it like any other regular app. Alternatively, you can play the game using a Cloud Gaming option like Boosteroid.

Civilization 6 is now available to play on cloud gaming servers. This assures NO
compatibility issues while playing on your Mac as well as top-notch performance.

Before playing Civilization 6 make sure you get the game through the official websites. At the moment the Steam version is compatible with cloud gaming services such as Boosteriod.

All you need to do now is register for Boosteroid. This allows you to add Civilization 6 to their Cloud Gaming Library. Once uploaded you can seamlessly play the game from your Mac, TV, or Mobile Device.

As we said, there are two ways to acquire the game – through the Mac App Store and through Steam:

Getting Civilization VI from Steam