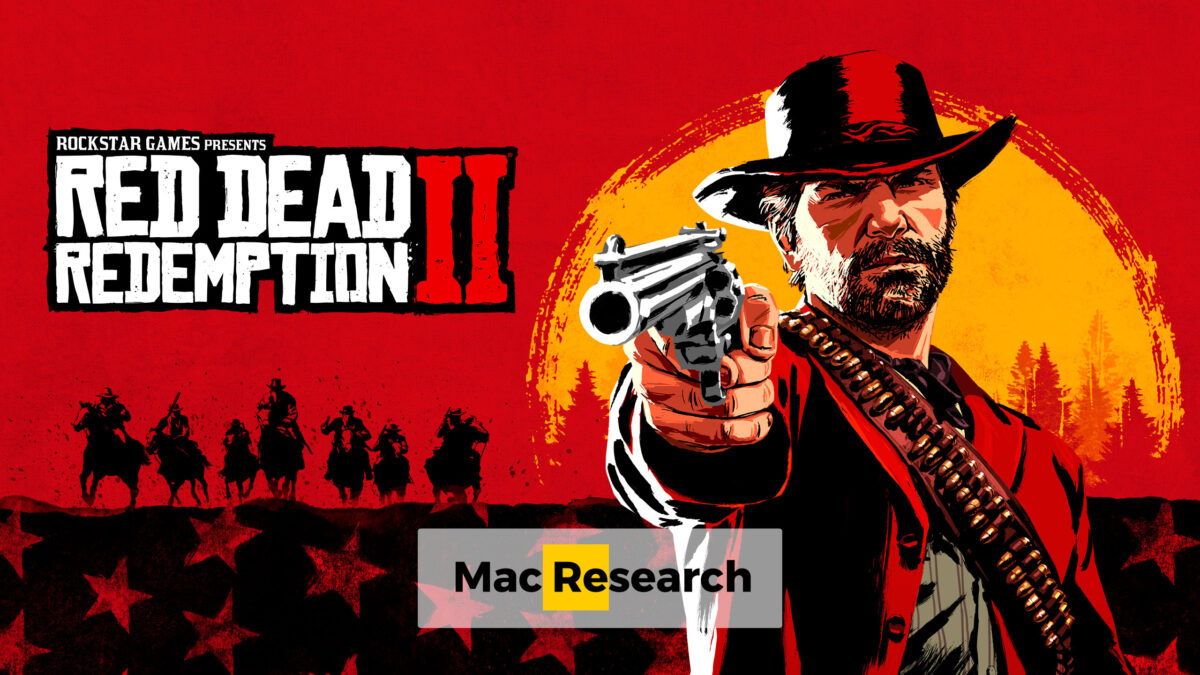 About Red Dead Redemption 2 on Mac

If you want to experience the open world of the Wild West, Red Dead Redemption 2 is the action-adventure game for you. The story opens with Arthur Morgan and his Van der Linde gang fleeing the federal government and prominent bounty hunters across America.

This hard adventure requires players, in the role of Arthur Morgan, to recall their criminal past and to sweep into the heart of America with booming thefts, shootings, and robberies.

The western spirit will throw RDR2 gamers into different missions and discussions with main and side characters. Lots of gaming content and fascinating storyline twists will keep you glued to your seat throughout the game.

Upon completion of the story, players can join other players in the multiplayer environment where they can play comparable missions, horse races, and other games with friends or strangers.

Red Dead Redemption 2 is accessible on Microsoft Windows, Playstation, and Xbox. It’s a shame there’s no macOS version because many Apple users would like to play it. On this page, however, we can help you run Red Dead Redemption 2 and other games on Mac despite the official incompatibility.

1899 is a turbulent year in the American nation’s history. Arthur Morgan and his Van der Line gang are on the run. With federal agents and the nation’s greatest bounty hunters behind, the gang must rob, steal, and fight to survive. Arthur must choose between his own beliefs and his gang’s devotion, as severe internal tension threatens to split the group.

Throughout the game, Arthur wanders the countryside in quest of new adventures, new creatures to hunt, and new secrets to discover. It’s a game where you pick up items one by one, each with its own animations.

When arranging a trip to a remote location in Red Dead Redemption 2, you should make sure you prepare enough food, medication, and clothing for you and your horse. You may need to stop and camp along the way.

A realistic number of weapons and tools allow you to hunt with patience. Aside from that, your horse isn’t invincible or immortal. If it dies in the hills or mountains, you must return to town to buy another — or rob a horse from someone. While some people may dislike the game’s slower pace, there are a lot of players who find this natural world fascinating to dive into.

Of course, you can spice things up with Western action film missions like bank robberies, railroad heists, and other adventures like a hot air balloon ride. Some missions have a recurring theme of the gang getting into more trouble.

Missions begin and end in different places. Red Dead II keeps you guessing where you’ll end up next, bringing in in-game characters you might not normally expect to interact with.

Rockstar goes over and beyond in terms of mechanical interactions to deepen your gang relationship. Conversations outside of cut scenes are done with a simple right-mouse click, which expands your dialogue possibilities in several ways. This is useful for mid-mission story exposition with characters you wouldn’t otherwise see, but it also diversifies the free wander. You can be polite in small talk, threaten, rob, or simply antagonize people for fun. These options may appear random on a first look, but they make the game feel more interactive than merely a game of shooting. Playing with alternative dialogue paths can create a lot of fun moments.

Immersion is one of Red Dead Redemption 2’s most satisfying features. This slow and meticulous game dives you into its own world, characters, and motivations. The game’s world is huge and diverse, with deserts, icy mountains, and swamplands. You can go pretty much anywhere on the map, which really gives you an open playground to explore.

The PC version of Red Dead Redemption 2 features enhanced graphics and technical features for a more immersive gaming experience, including increased draw distances, better global illumination, and ambient occlusion for impressive day and night lighting, deeper shadows, and reflections. Detailed tree textures, and improved grass and fur textures add up to the realism of the game.

Red Dead Redemption 2 includes free access to the shared living world of Red Dead Online, where players can track wanted criminals as a Bounty Hunter, start a business as a Trader, unearth exotic treasures as a Collector, or run an underground distillery as a Moonshiner, among other roles.

You can participate in the game’s story, which is one of the best video game tales of the decade. The character performances, script, and animation are all excellent and help convey a compelling story. The beauty is that you may either follow the story objectives or simply explore the realistic-looking world and get lost in it.

A wide repertoire of music and sound effects complement the video game’s visuals. Bullets fired from mountaintops have a different sound than those fired from inside. Sounds like detonator wire being unspooled or bottles in a moonshine wagon being clinked are all just little reminders of the detailed touch to sounds that you will experience in Red Dead Redemption 2.

Dive in the adventure

Red Dead Redemption 2 is up there with Grand Theft Auto V as one of the best online adventure games ever made. With Rockstar’s greatest storytelling to date, it’s a stunning description of the challenging history period of young America’s nation that’s polished and entertaining to play. The game may include content not suitable for all ages or viewing at work, as it is categorized as General Mature Content, according to the developers. Still, if you want to explore one of the best single-player action games to date, take the role of Arthur Morgan, a wanted bandit forced to run from the federal hunt, and live the realistic adventures.

Can you play Red Dead Redemption 2 on Mac?

Red Dead Redemption is a very popular game, but this is still apparently not enough to justify supporting a macOS version for it. This is bad news if you are a Mac user and want to play the game without buying a PC, an Xbox, or a PlayStation. However, there is also some good news for Mac users – there are quite a few Mac gaming methods that can allow Mac owners to run nearly any Windows game on their Mac, including Red Dead Redemption. In the remainder of this post, we will introduce to you the most effective methods of playing Red Dead Redemption on a Mac.

Red Dead Redemption 2 is now available to play on cloud gaming servers. This assures NO
compatibility issues while playing on your Mac as well as top-notch performance.

Before playing Red Dead Redemption 2 make sure you get the game through the official websites. For the moment Rockstar, Steam and Epic Games are compatible with cloud gaming services such as Boosteriod and Geforce.

All you need to do now is register for Boosteroid. This allows you to add RDR2 to their Cloud Gaming Library. Once uploaded you can seamlessly play the game from your Mac, TV or Mobile Device.

How to play Red Dead Redemption 2 on Mac

Boosteroid is a type of service that allows its users to play a wide variety of games included in its library through the implementation of advanced cloud technology that links the user’s device to a Boosteroid gaming rig on which the games are actually played.

Cloud gaming is a great way for Mac users to play all of their favorite games without even needing to install them on their computers. Furthermore, even if a game is not officially supported for Mac, as is the case with Red Dead Redemption 2, a cloud-gaming service like Boosteroid can still allow you to play it because, when playing Red Dead Redemption through Boosteroid, the game will technically not be running on your computer, but on a remote gaming rig that you’d be controlling from your Mac.

Setting up Boosteroid and starting a game in it takes just a couple of minutes and doesn’t require the installation of anything – the game starts directly in your browser (Safari, Chrome) and can be played even if your Mac doesn’t meet its system requirements. Below are our instructions on setting up an account on this service and playing Red Dead Redemption 2 through it.

You can also purchase the game from Epic Games Store, and then you must use the Epic Games page of Red Dead Redemption 2 on Boosteroid to play it.

The two mentioned Windows installation methods are quite different and have different pros and cons. Parallels lets you create a Windows virtual machine (VM) within your macOS, enabling you to run Windows while your Mac stays in its default operating system. One downside of this is that macOS and Windows would need to share your Mac’s RAM and CPU power, which, in turn, won’t allow Windows to use all of the computer’s hardware resources for gaming. The plus side is that this method of installing Windows is much quicker and easier to set up, and takes significantly less storage space compared to performing a full Windows installation in a separate partition. Another advantage of the Parallels method is that the program itself is being constantly updated and improved, with a lot of focus being put on allowing Mac users to play video games (there’s even a dedicated Gaming setting for Parallels VMs that we recommend using).

On the flip side, the Boot Camp method lets your Mac use all of its operative memory and CPU for Windows, but requires a great deal of storage space (at least 150 GB for the Windows installation + additional space depending on the game’s size, which in the case of Red Dead Redemption 2 is another 150 GB). Another downside of this method is that Apple is quickly moving away from Windows and rarely updates, so it rarely updates its Windows drivers, meaning that you are likely going to get bad gaming performance with this method, especially when trying to play a game as demanding as Red Dead Redemption 2.

Two additional points that must be made are that Parallels is a paid software, while you can perform the Boot Camp installation for free, and that the Boot Camp method is only available for Intel Macs, while a Parallels virtual machine can be created on both Intel and M1 Mac models.

Now that we’ve described the specifics of each method, here are our instructions on how to perform the Windows installation with each of them:

For more details on each of these steps, please, visit our How to install Windows on Mac using Parallels guide.

For more details on each of these steps, please, visit our How to install Windows on Mac using Boot camp Assistant guide.

Red Dead Redemption 2 can be run on Mac M1 using cloud-gaming services such as Boosteroid and Google Stadia. You can also install Windows using Parallels and download and install the Windows version of Red Dead Redemption on your Mac M1.

All of the methods for playing Red Dead Redemption 2 on Mac shown in this article apply to both Intel-based Macs and M1 Macs, with the exception of the Boot Camp Assistant method, which can only be used on Intel Macs. If you want to install Windows on your M1 Mac and get the Windows version of Red Dead Redemption 2, you will need to use the Parallels method, as shown above, since the Boot Camp Assistant app isn’t available for Macs with M1 chips.