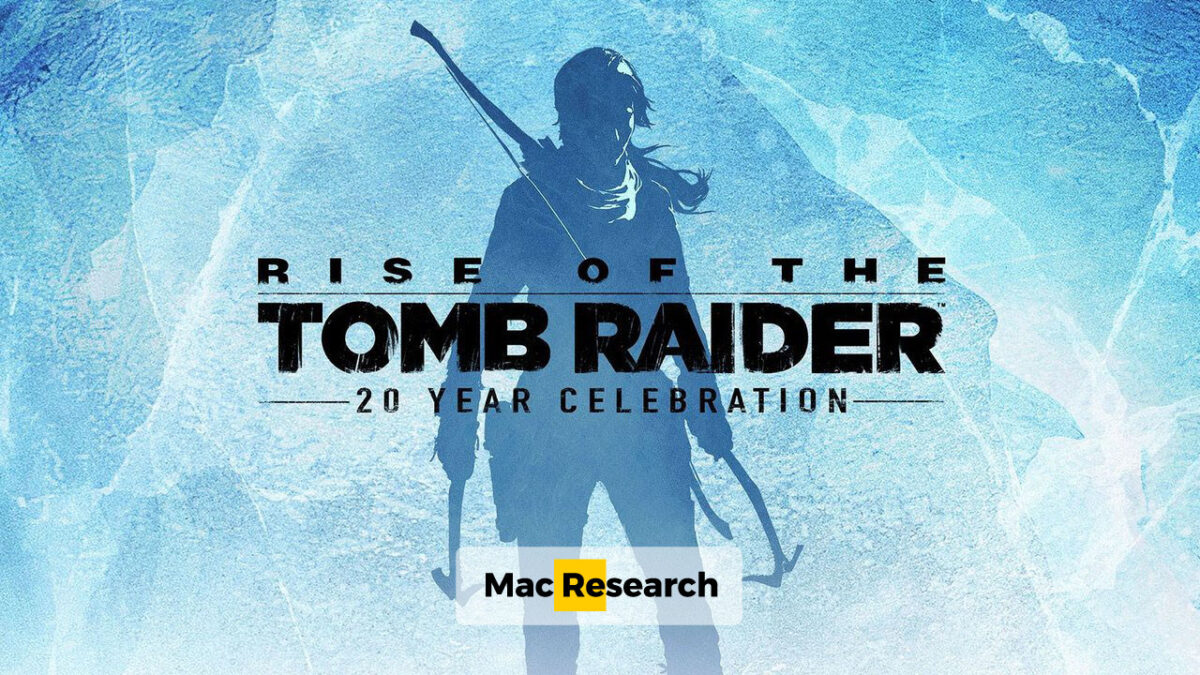 Rise of the Tomb Raider (Mac)

Rise of the Tomb Raider on Mac

The game revolves around the story of Lara Croft, the main character, which becomes obsessed with her late father’s discovery of “Divine Source”. The relic is said to provide immortality and is said to be hidden in the lost city of Kitezh, so naturally, Lara wants to find it. But she’s not alone, as an evil organization named Trinity follows her every move to find the artifact before she does. The two protagonists fight for the treasure in an Indiana Jones-like manner that gives little room for breath. Aside from a few surprises, the plot proceeds quickly and smoothly, providing us with an engaging story from start to finish.

Rise of the Tomb Raider’s Gameplay

The core of Rise of the Tomb Raider revolves around Lara, who has to climb, crawl and find her way through various challenging environments – from a transformed abandoned gulag to a frozen ship stuck in a glacier. The combat emphasizes precision and resource management. The platforming is near perfect, giving the player control of everything.

Gameplay-wise, you can choose your personal approach when it comes to combat, the skills you acquire, and the quests you take on the expansive environments. You can use stealth or go in guns blazing, but you also can mix the two as you stealthily take down a few enemies and then sneak back into the shadows. So you can decide to wait in the bushes for the best moment to make a killing move.

The semi-open world you visit offers you a lot to do. While there are areas with main target markers, it’s hard not to get distracted by the quantity of content these places offer. They’re big enough to allow for serious exploration, but not so vast that you’ll feel overwhelmed. These sections provide side quests and challenges, as well as some of the game’s best content: the optional challenge tombs. Nine of them are scattered throughout the campaign and represent the game’s strongest and most hard-to-solve puzzles. You’ll be rewarded with a valuable new skill for the time spent solving them. The lost city of Kitezh adds to the mystery of the overall experience in Rise of the Tomb Raider’s world.

Lara is given several tools to overcome the icy cliffs and the rocky mountains she faces. The ice ax makes scaling Siberia’s snowy walls much easier, and the legendary bow and arrow serve as both a weapon and a navigational tool. The game enhancements include a wire spool that allows Lara to grab onto hooks while in the air.

You’ll find a lot of collectibles, six types in total. The most essential ones are relics and documents, which reveal old tales and describe the present. The Survival Instinct feature makes finding these collectibles easier. As you explore new areas, this feature can be used for highlighting important objects within Lara’s immediate vicinity.

As you explore the environment, you’ll find base camps where you can learn new skills, make new items, upgrade your weapons, and fast-travel. Your skills are divided into three categories: Brawler, Hunter, and Survivor. These categories cover different aspects of Lara’s character, from increasing her pistol and melee skills to speeding up crafting time in the field. It’s a deep system that allows perks to stack and complement each other to offer you an exciting feeling. The game lets you observe how Lara evolves as a fighter, craftswoman, and navigator, as well as a story character.

In Rise of the Tomb Raider, Lara faces off against both – enemies and the harsh world itself. The game dives you into an adventure where you can hunt animals to make weapons, scavenge for rare resources, and combat. Beautifully harsh surroundings with treacherous conditions and unstable landscapes test your player’s abilities as Lara’s limits are pushed to the maximum.

Can you play Rise of The Tomb Raider on Mac?

Yes, you can play the game on Mac. You can explore the world of Lara Croft on a Mac, as long as you meet the following minimum system requirements:

How to play Rise of the Tomb Raider on Mac

Since this game has a macOS version, there’s nothing complicated about running it on a Mac. However, if your Mac is short on storage space and/or struggles to meet the other system requirements for the game, then maybe it would be better to try playing Rise of the Tomb Raider through a cloud-gaming service. Currently, this game is available in the libraries of Boosteroid and GeForce Now – two popular cloud-gaming platforms that can let you play the game without needing to have it installed on your Mac. Also, note that using such a platform, you’d also be able to play games that don’t have versions for Mac. This is because, while playing a given game through such a service, the game is actually running on a PC gaming rig that your Mac is connected to, thus enabling you to control and see the gameplay. The only real downsides of cloud gaming are that you’d need an above-average Internet connection to get good performance and that you’d need to pay for the service (GeForce Now comes with a free version, but one that has a couple of pretty significant limitations).

Below, we will go over each of the three mentioned methods of playing Rise of the Tomb Raider on Mac, so that you can pick the one you like the best and use it to play the game. Note that, for each of the three options, you’d need to have a Steam account and to have already purchased the game on Steam, so do that first, before you try any of the following methods.

Rise of The Tomb Raider Set up Methods

Play Rise of the Tomb Raider with Cloud Gaming

Rise of the Tomb Raider is now available to play on cloud gaming servers. This assures NO compatibility issues while playing on your Mac as well as top-notch performance.

Step 1. Get Rise of the Tomb Raider

You can go straight ahead and buy Rise of the Tomb Raider from the Steam store. You can play the game right away after you have purchased it. If you feel the game graphics are under-performing, you can proceed to step two where you can upload the game to the cloud gaming library for better performance.

Step 2. Register and Add Rise of the Tomb Raider to Cloud Gaming Library

All you need to do now is register for Boosteroid. This allows you to add Shadow of the Tomb Raider to their Cloud Gaming Library. Once uploaded you can seamlessly play the game from your Mac, TV, or mobile device.

When Registered you will have additional access to more than 70 top-rated games for free. Pricing varies depending on the subscription plan. Full Guide Bellow.

Play Rise of The Tomb Raider

Play Rise of the Tomb Raider with Boosteroid

Note: If the game doesn’t load properly, try using Boosteroid through a different browser. It’s recommended to use the service through Google Chrome or Opera.

Play Rise of the Tomb Raider through GeForce Now

You will find more details on how to use GeForce Now on Mac on the linked page.

How to download Rise of the Tomb Raider on Mac

Here is exactly what you must do to get the game downloaded and installed on your Mac:

Rise of the Tomb Raider on Mac M1

The only significant difference that may be noticed while playing Rise of the Tomb Raider on an Intel Mac and on an M1 Mac is in the performance – M1 models would generally do better at running this game compared to their Intel-based counterparts. This is why it may be better to use a cloud-gaming service to run this game on an older Intel Mac and download the game on an M1 Mac. Other than that, there aren’t any noteworthy differences in the way you could play Rise of the Tomb Raider on either type of Mac model. Since the game is officially supported for macOS, it should be equally playable on both Intel and M1 Macs, so long as the specific machine meets the system requirements for the game.

How to Play Assetto Corsa on Mac

How to create Apple ID Online