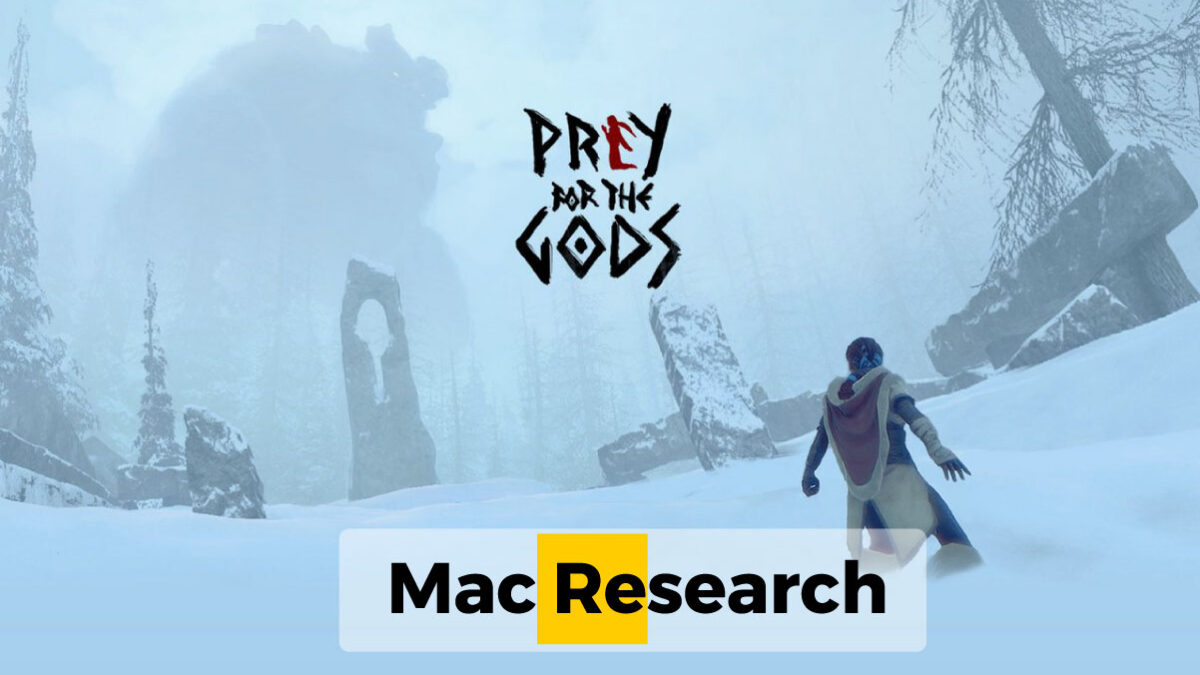 About Praey for the Gods on Mac

Praey for the Gods isn’t available on Mac, so the only way to play it on a Mac would be through the different workaround methods. Possible variants to run Praey for the Gods on Mac are to use GeForce Now or to install Windows.

Praey for the Gods is a newly-released (14 December 2021) action-adventure, exploration, and survival game played from a third-person perspective. The game is developed by No Matter Studios and has been in early access since 2019.

At the start of the game, the player’s character starts on a frozen and desolate island equipped only with the clothes on her back and nothing else. The initial goal is to scavenge the nearby areas, find resources and food, and survive the harsh environmental conditions. Later into the game, once the player has crafted some weapons and has started to get a hang of the core mechanics of the game, the main aim shifts towards slaying titanic creatures referred to as Gods, who are in some way tied to the current frozen state of the world in which the game is set.

Praey for the Gods certainly employs a lot of familiar mechanics and tropes of the survival adventure genre – a lot of players have likened it to the Shadow of the Colossus game series (some even think the two games are related). That said, Praey for the Gods is a well-made game that provides an engaging and challenging single-player experience, where each victory (and defeat) feels earned.

Can you play Praey for the Gods on Mac?

To no one’s surprise, Praey for the Gods lacks a macOS version, and it is unclear if it would ever get one (don’t hold your breath). However, this doesn’t necessarily mean that it’s not possible to still play this game on a Mac. There are actually at least three potential methods that may allow you to run this game on your Mac, so if you really want to give Praey for the Gods a go without purchasing a PC or an Xbox specifically for this game, the methods and instructions shown below should allow you to do that, granted, you’ll first need to jump through a couple of hoops before everything is set up and your Mac is ready for gaming.

Before we get any further, you must first make sure that your Mac is up to the task of actually running this game in terms of raw hardware power. If your Mac doesn’t meet the system requirements for Praey for the Gods, then two out of the three methods we will show you below won’t be an option for you. The good news is that, even if you are using an older and less powerful Mac, the GeForce Now method should still let you play the game provided that your Mac meets the (significantly lower) system requirements for the GeForce Now app and that you have speedy Internet (more on that in a bit). However, for the other two methods (especially the Parallels one), you really need a Mac that has the required (or better yet, recommended) amounts of RAM, CPU speed, and the number of CPU cores for the game (check the list of requirements right below).

Praey for the Gods on Mac M1

Praey for the Gods can be played on Mac M1 using GeForce Now. If you don’t want to use cloud gaming, you can alternatively create a Windows virtual machine (VM) using Parallels and play Praey for the Gods on your Mac M1 through the VM.

The new M1 Mac models are considerably powerful, which actually makes them surprisingly good for (casual) gaming, even though Macs, in general, are not designed to be gaming machines. This is what makes the Parallels method a viable way of playing Windows games on M1 Macs. Parallels is a program that enables you to run Windows 11 on your M1 Mac without actually installing Windows in a separate partition. Think of it as a sandbox app that simulates the Windows 11 experience (Windows 11 virtual machine), all the while the app itself is running in your macOS.

The reason this is important is that your Mac would need to have enough CPU cores and RAM to simultaneously run macOS and Windows, together with whatever Windows game you want to play through the virtual machine. For this reason, if you want to play any Windows game through Parallels on your Mac, note that your Mac needs to meet not only the minimum requirements for the said game but also the recommended ones. That said, there are indeed some very powerful M1 Mac models, so if you have one of them, you can try the Parallels method right now and see how well it works for you. Note that this is paid software, but its 14-day free trial should give you more than enough time to figure out if you are satisfied with the Parallels experience and the gaming performance you can get using its Windows 11 virtual machine.

Follow the instructions below to create a Parallels VM for gaming on your M1 Mac:

Note: You can also create Parallels Windows VMs on Intel Macs – the process is nearly identical as the one shown above. The only significant difference is that you need to use an ISO Windows 10 file for the installation. You can download a Windows 10 USO file from this Microsoft page.

How to play Praey for the Gods on Mac Intel

In addition to the Parallels method shown above, if you have an Intel Mac, you can also install Windows 10 on it with the help of the Boot Camp Assistant tool that comes preinstalled in Intel Macs (but not in M1 Macs). Another way of playing Praey for the Gods on Mac (Intel or M1) is to use GeForce Now. Below, we will provide you with instructions for both the Boot Camp Assistant and the GeForce Now methods.

The third option for playing Praey for the Gods on a Mac machine is to use the GeForce cloud gaming service. The advantage of this method is that you won’t even need to install the game in order to play it, which also means that you won’t need to first get Windows on your Mac.

Through GeForce one, you can connect your Mac to a remote PC gaming rig that already has Praey for the Gods installed on it and play the game on that PC from your Mac. You would be controlling what’s happening on the gaming rig, while the gameplay would be getting streamed to you in real-time. Obviously, having a fast and stable Internet connection is crucial here, or else the performance would suffer, and you’d get a lot of latency.

The good thing in the case of Praey for the Gods is that it is a single-player game, which means that you won’t get as much lag as you might if you try to play a multiplayer game via GeForce Now. Still, if your Internet isn’t good enough, you may not be able to play games through GeForce Now (or any other cloud gaming service). On the other hand, since the game wouldn’t actually be running on your Mac, it doesn’t matter if the computer doesn’t meet the recommended or even the minimum system requirements. All that matters is that it meets the requirements for the GeForce Now app, and those are rather low so that most Macs released in the past 6-7 years should have no problem running it. If you are interested in trying this method to play Praey for the Gods on your Mac, follow the next instructions to set everything up.