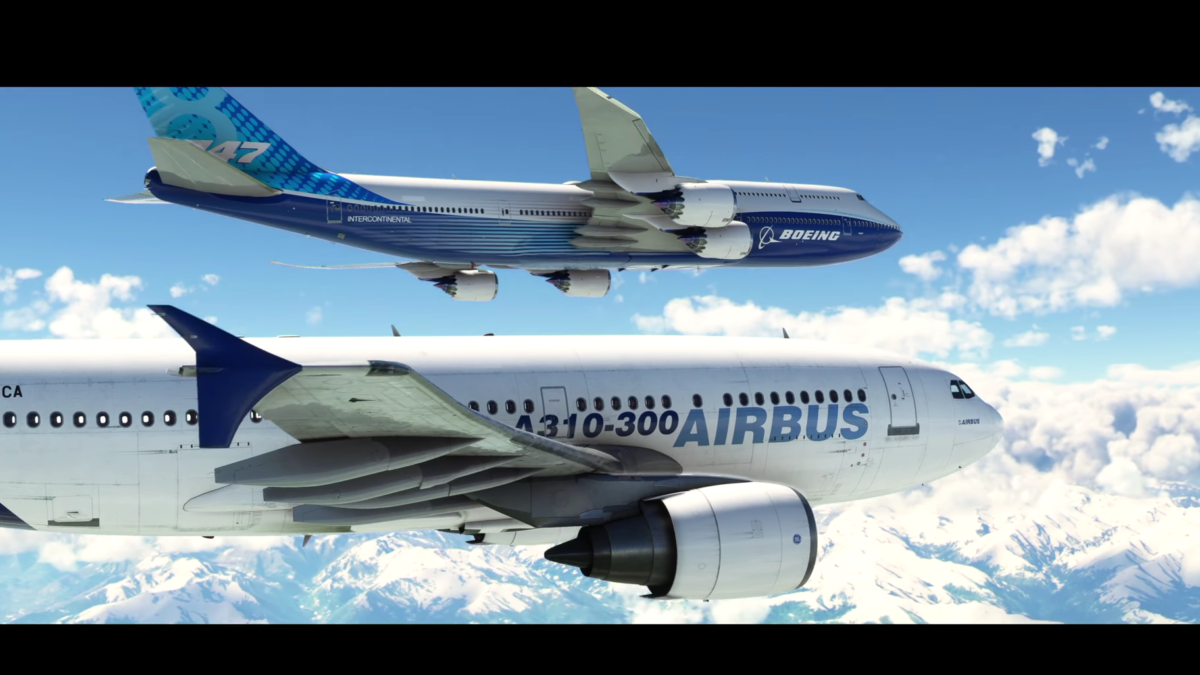 Microsoft Flight Simulator is a series of flight simulator games that allow players to experience the beauty and thrill of flying with a variety of aircraft.

The Microsoft Flight Simulator 40th Anniversary Edition (released in November 2022) is the most advanced version of the series to date. It honors aviation’s fascinating history by introducing a selection of iconic aircraft recreated with impressive accuracy. Plus, it impresses the fans with numerous community-requested features and enhancements.

The sophisticated weather simulation seen in the latest two versions of the game makes a return in the Anniversary Edition, along with the ability to download real-world data about the weather. The interactive air traffic control functions are also there, accompanied by a list of legendary missions from the series’ previous installments, interactive tutorials, and aircraft checklists.

What is new is that fans of the series can now play with helicopters and gliders, as well as the fully functional, true-to-the-original Airbus A-310-300.

The latest installment also comes with four iconic airports, including Meigs Field in Chicago, which is the traditional airport for the Microsoft Flight Simulator series.

Several enhancements have been implemented to provide a smooth flight sim experience. What can’t go unnoticed is that the live traffic feature has been simplified and made easier to use.

The simulation of the weather has been vastly improved, particularly with regard to Thermals. The weather panel now has the option to toggle a 3D thermal depiction on and off.

The CFD (Computational Fluid Dynamics) has also undergone some general tuning. The developers have included a new in-game CFD airflow display visualization for CFD-enabled aircraft which is accessible in the help menu.

The height gain function for the Back to Fly feature has been reworked and now takes into account the plane’s present altitude, enabling swift course corrections in a wide range of situations.

Players can take control of an aircraft of their choice and put their flying skills to the test against a changing environment.

They can maneuver an unpowered glider or control a rotor-wing aircraft over congested cities, all while experiencing enhanced real-time atmospheric simulation and challenging weather conditions.

It is possible to make a flight itinerary to any of the game-supported destinations the players choose, which includes 30 hand-crafted airports in the standard edition.

The new ability to fly with a helicopter gives players a very different experience and a new level of freedom, which wasn’t possible in previous installments. There are options that allow you to land anywhere you want, as well as change the course and fly somewhere else without needing to always stay on a set trajectory.

In terms of graphics, the simulator doesn’t fail to impress with the visuals. Satellite imagery can be downloaded in real-time for a more authentic experience via the online functionality setting. The game offers an ever-growing list of scenery, representing major landmarks and popular cities with impressive attention to detail. The same amount of detail is put into the recreation of the new aircraft models, introduced in the simulator.

If you love aircraft, Microsoft Flight Simulator 40th Anniversary Edition is a great sim. There is an active community and plenty of tutorials to introduce you to the basics.

The game offers substantial technical enhancements in flight dynamics and simulation with an accent on the beauty and thrill of flying. There is a wide selection of upgrades, both free and commercial, as well as official and fan-made add-ons.

If you already own Microsoft Flight Simulator, you can get the latest version as a free update. New players may get into the series now and enjoy the content-packed 40th Anniversary Edition with all of its improvements.

Fans of the Microsoft Flight Simulator 40th Anniversary Edition can play it on Mac, however, because the game has no official Mac OS version, they need to use some workarounds which we will talk about below.

A very convenient solution, that can give you a good gaming experience is to install Windows OS on your Mac with the help of Parallels or Boot Camp Assistant. After you do that, you can download the Windows version of Microsoft Flight Simulator 40th Anniversary Edition on your Mac with Steam and play.

Please check the instructions on how to use these two programs if you want to get as near as possible to the original experience of playing the Windows PC version of Microsoft Flight Simulator 40th Anniversary Edition on your Mac.

Here it is important to note that Parallels is compatible with both Intel-based and M1 Based Macs, while Apple’s Boot Camp Assistant is only compatible with Macs that have an Intel processor, so, please take this into consideration when choosing the program you want to use.

If you want to download Microsoft Flight Simulator 40th Anniversary Edition, the first thing that you need to do is to create a Windows virtual environment on your Mac. You can do that with either Parallels or Boot Camp Assistant – two Windows virtualization programs that make it possible to play unsupported games on a Mac with a relatively good gaming experience.

Once you have Windows OS running on your Mac, you can use Steam to download Microsoft Flight Simulator 40th Anniversary Edition and install it on the newly created virtual Windows OS.

Currently the best way to play the game is through Xbox Game Pass, because it costs exactly 1$ for new users. We recommend playing through Game Pass’s cloud streaming that comes with the Ultimate tier, because Flight Simulator is a very hardware-demanding game.

Microsoft Flight Simulator 40th Anniversary Edition can be played on a Mac M1. However, if you don’t want to use the Xbox Game Pass method above, you have to use Parallels to create a Windows virtual machine, and only after that, you can download the game with Steam to play it. Please note that using Parallels is a workaround method that does not guarantee a gaming performance that is identical to the performance you can get when playing the game on a Windows PC. However, this is still a way to enjoy Microsoft Flight Simulator 40th Anniversary Edition and other titles that don’t have official Mac-supported versions on your Mac with relatively good quality.

For more detailed instructions on Parallels, please check out our Full Parallels Guide.