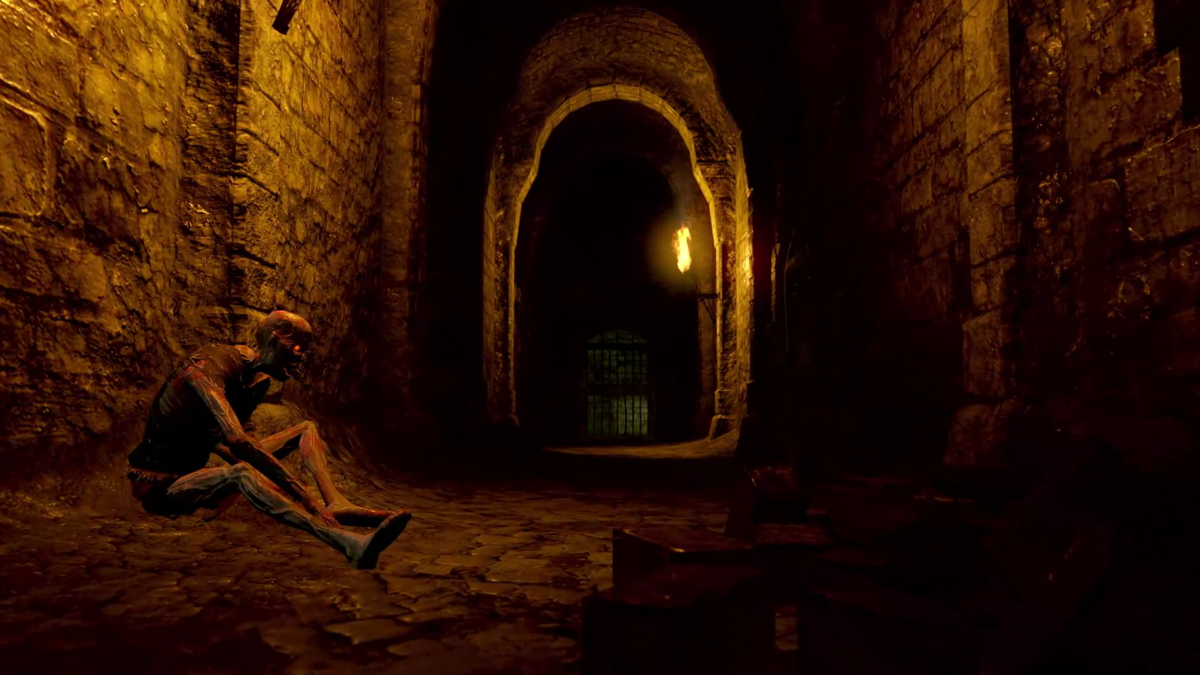 Dark Souls is an action role-playing game, the first in the Dark Souls series. The game is played from a third person perspective and is set in the fictional kingdom of Lordran. Players take control of a cursed undead character who sets on a quest to explore a world full of dangers.

Those unfamiliar with the series will easily be impressed by the game’s dark setting, the challenging fights with powerful creatures, the great riches that wait to be discovered, and the breathtaking locations.

The open world might tempt you to explore perilous places very early in the game, so if you are looking for a challenging game, Dark Souls is the title for you. As soon as you start playing, you will be faced with difficult terrains to traverse, tense encounters, boss fights, and mysteries to explore. Before you catch your breath, you will have to deal with things like weapon durability, curses, enemies that never actually die, and the constant threat of losing everything you have. None of this is skipped in the Remastered game, which is just as good as the original.

Exploration is essential to progressing through the game. Although there are requirements to access specific regions, players are constantly encouraged to choose new areas to investigate. As the player’s character explores the world of Dark Souls, they will engage in spectacular combat. Melee attacks, defensive moves, and magical skills can all be used in battle. Of course, all of these come with their own advantages and disadvantages that you need to consider. You can improve or change your fighting style and strategies by leveling up and upgrading your weapon, or by collecting consumable goods, magical rings, and new equipment.

In melee combat, characters may use swords, spears, maces, and weapons like magical swords, all of which are inspired by medieval fantasy settings. When it comes to defense, shields, armor, parrying and dodging are just some of the defensive options available to players.

The game’s magic system includes a broad range of offensive and defensive powers (known as sorceries, miracles, and pyromancies), however, what you will notice is that it works a bit differently from most other fantasy RPGs. Those usually need players to use mana to cast spells, while in Dark Souls players gain a certain amount of uses for each attuned spell when they rest by a bonfire.

Speaking of bonfires, in Dark Souls, this is an integral part of the game. There are bonfires spread over the environment that act as checkpoints for each level. The player’s health is restored to full if they rest by one, but doing so also causes all of the world’s monsters to respawn.

The “humanity” system is another feature of Dark Souls where the player’s character may take on a human or a hollow form depending on the situation. When in human form, the character may be attacked by non-player characters that want to kill them. Other players may also attack in order to regain their humanity, harvest souls, or accomplish some other task. Players lose their humanity and whatever souls they were carrying when they die. Reviving is possible in hollow form, with just one opportunity to reclaim their former lives.

There are many non-player characters (NPCs) spread out around the game’s world. These characters are optional to interact with, yet helpful to the game’s story, as some of them may help the player in specific boss encounters if he chooses to speak with them.

The graphics and the general feel of the game have been polished for the Remastered version. The game looks better on higher-end displays and gives much more detail to the textures than the original.

In addition to the revamped aesthetics, an emphasis has been made on the game’s matchmaking with the addition of a Password Matchmaking tool. Lovers of the original can also notice small changes in the new version that address certain long standing fan concerns.

For older fans, the game’s basic gameplay has remained unchanged. Dark Souls still gives you that enjoyable blend of combat and problem-solving. The game throws a lot of obstacles in your way, but with perseverance and achieving small goals, such as locating a hidden item or killing a monster after a dozen failed attempts, you can lead your way to success.

Can you play Dark Souls on Mac?

Those with a Mac computer may play Dark Souls but they will need to resort to a workaround since there is no native MacOS version of the game that can be downloaded and played directly.

One of the methods is through a cloud gaming service like Boosteroid. This service allows Mac users to play games like Dark Souls without having to download and install the game on their computer. Another way to play Dark Souls on your Mac is to use a third-party application like Boot Camp or Parallels to run the Windows version of the game.

In this article, we’ll show you how to play Dark Souls on a Mac and have a gaming experience as close to the PC version as possible.

How to play Dark Souls on Mac

Thanks to a cloud gaming service like Boosteroid, you can instantly stream Dark Souls to your Mac and begin playing. If you do not have access to a stable internet connection capable of streaming the game, you may be able to play Dark Souls by installing a Windows virtual machine on a Mac. The advantages and disadvantages of each of these methods are explained for you in the table below.

How to Get Dark Souls on Mac?

To get Dark Souls you need to purchase the game from the Steam store.

Now you will need to register for Boosteroid. This allows you to add Dark Souls to their Cloud Gaming Library. Once uploaded you can seamlessly play the game from your Mac, TV, or Mobile Device.

You can play Dark Souls without downloading or installing any extra software by using the Boosteroid service. With cloud steaming, you can focus on enjoying the game rather than worrying about whether your Mac meets the game’s minimal system requirements, such as having enough storage space. Are all you need to stream and play Dark Souls on your Mac is a Boosteroid account, subscription, and stable internet connection.

In order to download and play Dark Souls on a Mac, you’ll need to install an emulator such as Boot Camp or Parallels, that can emulate Windows on your Mac machine.

If your Mac is with an Intel CPU, use Boot Camp; If you have a Mac with an M1 processor, use Parallels.

Dark Souls may be played on a Mac M1 using a cloud service, such as Boosteroid, or by installing Windows on your system with Parallels. Cloud gaming is the most efficient and hassle-free option because you don’t have to download and install anything, just sign up and play online.

If cloud-gaming is not your thing and you want to download Dark Souls on your system, you may create a virtual Windows environment on your Mac M1 with the help of the Parallels application and then download and play the game there. Regrettably, Dark Souls does not have a native Mac OS version, but if you follow the instructions in the paragraphs above, you should be able to have a good gaming experience on a Mac M1.