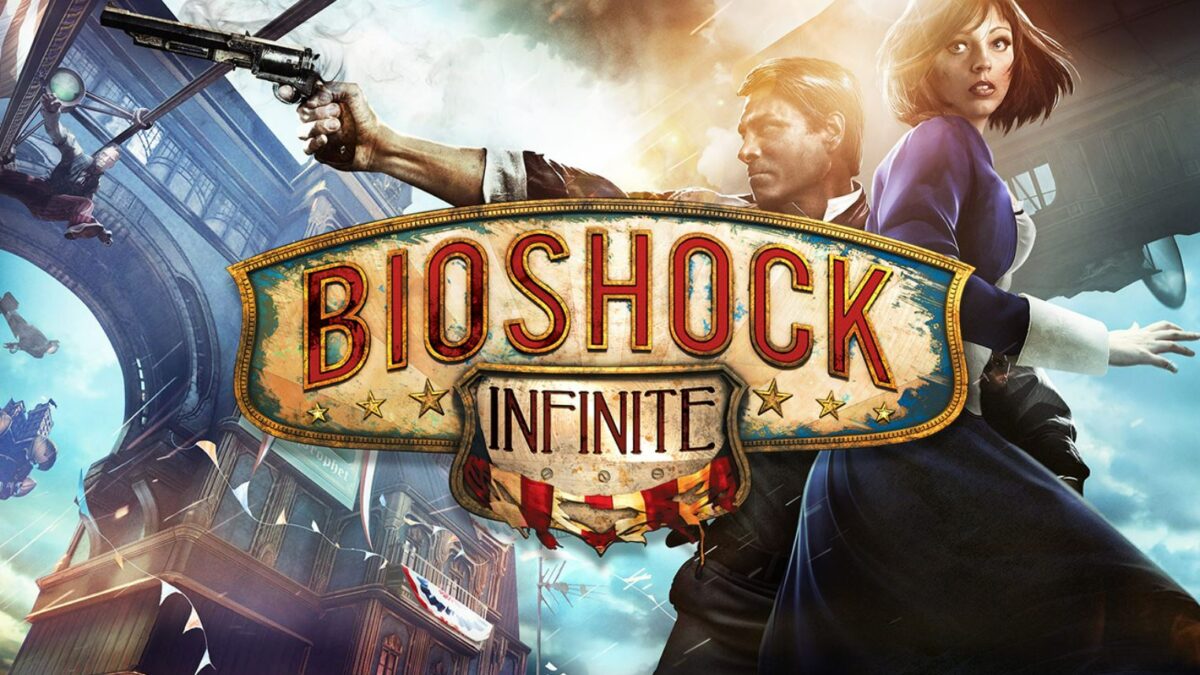 BioShock Infinite is the third installment in the renowned BioShock gaming series, and it can be played on Mac, but only through the use of workaround methods. Possible ways to play BioShock Infinite on Mac are to use cloud gaming or to install/emulate Windows.

BioShock Infinite is a 2013 FPS game with role-playing elements that is widely considered to be one of the best single-player first-person shooters of all time. Much like its two predecessors, Infinite is renowned for its immersive and fascinating world and setting and for its intricate and compelling story that comes with a jaw-dropping plot twist.

Despite being a game that’s nearly 10 years old, BioShock Infinite undoubtedly has a lot to offer to fans of the FPS genre who are looking for an engaging single-player experience that will keep them glued to the screen for hours on end. If you want more details on what makes BioShock Infinite such a highly-praised title, check out the following brief review of the game. Conversely, if you want to jump straight into the action and start the game on your Mac, take a look at the instructions about the different ways you can run BioShock Infinite on your Mac which are available in the How to play BioShock Infinite on Mac section.

What type of game is BioShock Infinite?

As we mentioned, this is a single-player first-person shooter game, much like the two BioShock installments that came before it. However, in Infinite, there’s a notable departure from the horror-themed setting and atmosphere in BioShock 1 and 2. Instead, Infinite does away with the horror elements in favor of a more adventure-themed vibe that’s present throughout the game. You will still find plenty of bizarre and peculiar events, encounters, NPCs, and mechanics in Infinite, but the darker horror themes from the two previous games won’t be there. For fans of the horror genre in gaming, this may seem like a downside, but, in our opinion, this change in the game’s theme doesn’t take away from the title’s quality whatsoever.

As for the gameplay, setting, story, sound, and visuals in Infinite, we can honestly say that each of those aspects is on par (or even better) with the level of quality present in the other two BioShock games.

Instead of exploring the dark halls and corridors of Rapture city, the majority of BioShock Infinite takes place in Columbia – a floating city suspended in the air, high above the ground, amidst the clouds. If BioShock 1 and 2’s setting had a steampunk aesthetic, that aesthetic is turned up to eleven here, giving the game a unique look and feel, that you won’t find in any other FPS. As with the other BioShock titles, the game’s setting, Columbia city, is masterfully crafted and detailed, and it feels like an actual place, where real people live. This allows the player to suspend their disbelief for the less believable sci-fi elements of the setting (such as the fact that the city is in the sky) and immerse themselves in the game’s world.

Even though by today’s standards, BioShock Infinite’s graphics have aged, this absolutely doesn’t make the game any less pretty or visually appealing. Its unique and inspired art direction and design give the game a timeless look that isn’t tarnished by the passing of time and advancements in technology. This, yet again, proves that art direction in a game is always more important than the game’s actual graphics.

BioShock Infinite’s story revolves around Booker DeWitt, a disgraced and emotionally scarred detective who has taken up a job to find and free a teenage girl named Elizabeth from her imprisonment in the city of Columbia in order to settle his gambling debts. As Booker gets to the city and finds and frees Elizabeth, he begins to realize that the very city of Columbia has unusual qualities – rifts in the space-time continuum (called “Tears”) open and close in the city, causing objects and people from other time periods and locations to teleport to Columbia. Furthermore, Elizabeth is somehow connected to all of this, being able to control those Tears – a quality of hers that is a major part of the gameplay, as the Elizabeth serves as a helping companion to the player for a large portion of the game and can use her control of the Tears to help the player progress.

Users who have already played the first BioShock would probably expect a big twist in Infinite’s story as such a twist was present in the first installment, and yes, there is a twist, but one that catches you off-guard even if you have been expecting it. This is a testament to just how well-written and though-out the story of the third BioShock game is – if you appreciate games with good and rich stories, this one is a must-try, and we can highly recommend it for its story alone. However, we won’t go into any more details about what happens in the game, because it’s best to experience Infinite’s story without having much prior knowledge of it.

The gameplay in BioShock Infinite is a natural step up from the previous two games, implementing what was good about the gameplay of its predecessors and building upon it to deliver something even better. The game offers a wide variety of weapons, as well as several interesting additional ways the player can power up the main character. One such mechanic is the use of Vigors – similar to the Plasmids in BioShock 1, the Vigors allows the player to use special powers such as emitting bolts of energy, causing shockwaves, and taking control of robotic enemies. There are also Gears – objects that can be equipped on the character of Booker to give him passive abilities such as higher damage resistance or strength. Finally, there are the Infusions, which permanently boost Booker’s health, shield, and Salts (energy/magic points). Such mechanics give the game a more RPG feel and diversify its gameplay.

One thing to be mentioned, however, is that similarly to BioShock 1, Infinite’s gameplay does become a bit stale and starts to feel padded-out, especially during the middle part of the story. It’s not that the game becomes boring per se, but it seems like the developers have added some extra levels or part of levels just simply to stretch out the game time rather than to add anything of actual substance. Another element that some players may find limiting in Infinite’s gameplay is the limitation of two weapons and two Vigors that you can have equipped at any given time. This can feel restraining by causing the player to stick to one particular strategy rather than be able to experiment with the different abilities and weapons available in the game as a whole.

None of this is to say that the gameplay in BioShock Infinite isn’t very good, but no game can be perfect, so this is likely the aspect of this title that some players may have gripes with.

BioShock Infinite is a worthy third installment in the BioShock series – one that keeps the tradition of delivering incredible stories that take place in rich and believable, yet also fantastical and alien settings. It also adds improvements to the many aspects of the gameplay and offers updated visuals that still stand out to this day with their beauty thanks to the top-tier artistic direction of the game. Considering all this, BioShock Infinite is an easy recommendation to anyone who likes single-player and FPS games and appreciates when the story delivered in them is intelligent, interesting, and packed with emotion.

Can you play BioShock Infinite on Mac?

If you go on Steam’s page for BioShock Infinite, you will notice that the game does have a macOS version. However, that version of the game is 32-bit and macOS Catalina and later macOS releases do not support 32-bit app architecture. Therefore, unfortunately, if your Mac is running on Catalina or later, the Mac version of the game won’t be playable on your computer.

There, however, are other viable methods of playing BioShock Infinite on Mac, and we will tell you more about them in the next lines.

How to play BioShock Infinite on Mac

Normally, the cloud gaming method using Boosteroid is very easy to set up and use – it doesn’t even require you to download the game. However, it requires you to have a decent Internet connection, or else gameplay performance may suffer irrespective of how powerful your Mac might be. On the other hand, the methods of installing or emulating Windows require significantly more effort, but won’t be affected by the current state of your Internet. Note that, to play any game through a cloud gaming platform, you need to be connected to the Internet even if the game itself is single-player like BioShock Infinite.

In the end, it’s up to you which method you are going to pick, so we will explain all three of them in the next lines.

How to Get Bioshock Infinite on Mac:

First, you will need to purchase the game. Limited time offer on CD.Keys.com for a discount – 77 % BioShock Infinite for $ 4.79

Now you will need to register for Boosteroid. This allows you to add BioShock Infinite to their Cloud Gaming Library. Once uploaded you can seamlessly play the game from your Mac, TV, or Mobile Device.

Note 1: Boosteroid can be used with any browser, but the ones recommended by the platform’s developers are Chrome and Opera, so if you are experiencing sub-optimal performance with Safari or another browser, consider using either of the two mentioned options.

Note 2: Currently, only the Steam version of BioShock Infinite can be played through Boosteroid.

If you want to actually have the game on your Mac and not be reliant on constantly being connected to the Internet when you want to play BioShock Infinite, then the options to choose from are two. The first one is to use Boot Camp to install Windows in a separate partition on your Mac and then download BioShock for Windows in the Windows partition on your Mac. The other option is to use a program called Parallels that lets you create a virtual Windows 10/11 machine within your macOS that you can use to run Windows apps, programs, and games. Both options require some effort and time to get up and running and each has different pros and cons. Generally, we’d recommend using the Boot Camp option if you have an Intel-based Mac, and the Parallels option, if you have an M1 Mac.

Of the three options for playing BioShock Infinite on Mac that we’ve shown on this page, only the Boosteroid and the Parallels methods are available for Mac M1 users. The Boot Camp method cannot be used on M1 Macs to install Windows 10 due to incompatibility between Windows 10 and the M1 chip architecture.

As mentioned earlier, the Boosteroid option is typically the one we’d recommend, but if you want to be able to play BioShock Infinite even if your Mac isn’t connected to the Internet and if you are willing to go through the process of setting up a Parallels VM on your Mac, this method is also a perfectly viable option of playing this game on a Mac.