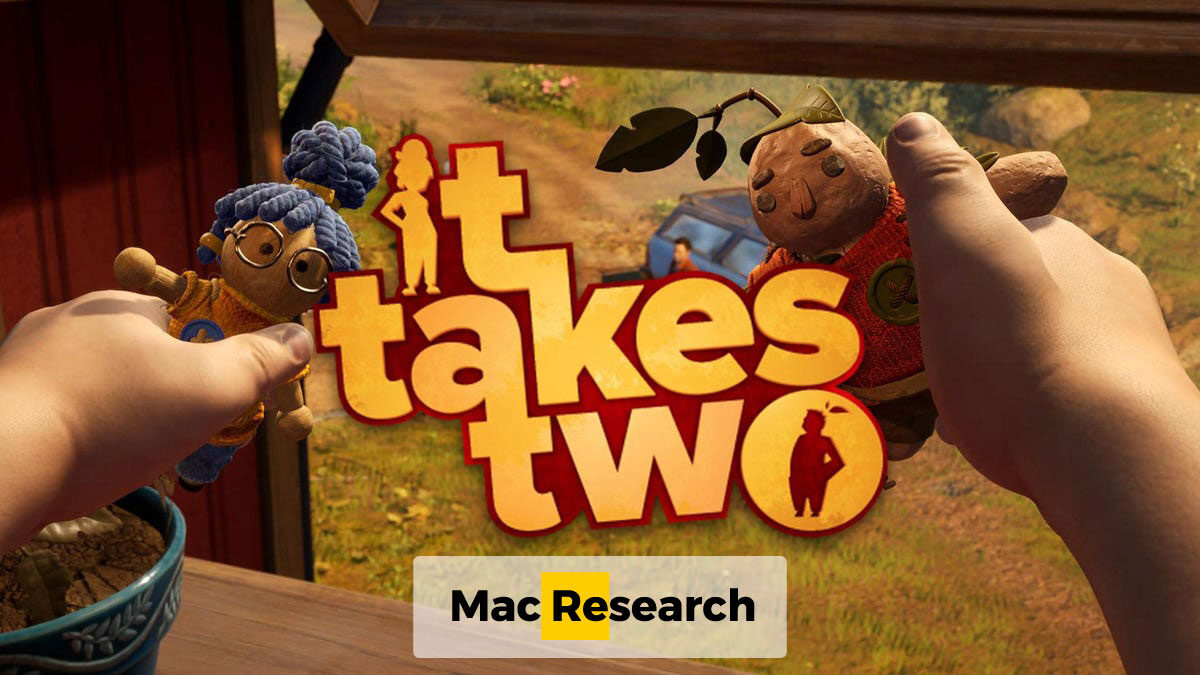 About It Takes Two on Mac

Developed by Hazelight Studios in 2021, It Takes Two is a cooperative adventure game for two players that can be played online or with a buddy on the couch. A Friend’s Pass feature makes it simple to play co-op without relying on your friends’ need to purchase the game too. You simply invite them, and they can join you for free.

Can you play It takes two on Mac?

It Takes Two can be played on PlayStation 4, PlayStation 5, Xbox One, Xbox Series X and S, and Microsoft Windows PC. The Mac does not support this game, however, there is a way to run it on your Mac machine with cloud gaming services or creating a Virtual Machine via Boot Camp or Parallels, we’ll show you exactly how to do it.

The game represents an engaging challenge filled with puzzles to solve and cleverly crafted missions to complete. It Takes Two combines platforming and racing elements, as well as some cheesy mental teasers, with one character doing the running, jumping, and climbing while the other is preparing the path. In order to complete a challenge, the one player might need to use a nail gun to create handholds on a wall, while the other one is using them to pass it.  Throughout the entire game, the players must constantly converse and plot, and the characters are often given different equipment and tools that must be used together to be effective.

Players take on the roles of Cody and May, a couple who’ve been miraculously converted into dolls after telling their daughter Rosy they’re divorcing. The catalyst for their metamorphosis is Dr. Hakim, an eccentric self-help relationship book, that comes up with the concept to help the couple reconcile their differences via cooperation. The real adventure begins with the couple having to travel across numerous Worlds and face different challenges together in order to break the enchantment and return to their daughter.

It Takes Two’s co-op mode offers a lot of fun. Through the game, there are mini-games, riddles, platforming, rail grinding, and action sequences, all of which require players to work together. Top-down RPG-style battles are also available in the form of a fantasy castle, where you must fight as a warrior and a magician.

Every level has a unique mechanic based on the environment, but even then, It Takes Two is continually changing how that mechanic is used to suit the level’s overall theme. There are scenes in the game where Cody and May are given different tools to assist them in solving some platforming puzzles. However, these tools may be utilized in a variety of ways, and only work when paired up.

There is also a touch of competitiveness in each level, where a variety of mini-games for you to compete with your partner in are available and can spice up the play.

Each player has a specific action

In each scenario, Cody and May have the same fundamental moves, but they’re equipped with various tools. One player is always responsible for a specific type of action, while the other has to communicate in order to synchronize his actions. For instance, May’s rifle is the only tool capable of detonating Cody’s explosive gel.

In nearly every scene, the actions of both players are combined to create a unique flow that needs teamwork and a lot of fun. In a few scenes, both characters are required to perform the identical action, but they must do so with slightly different reasoning and motion.

It’s impossible to play this game without interacting with the other player verbally at all times. Both players could die a lot throughout the co-op missions due to the difficulty of the timing and mobility requirements. Fortunately, checkpoints are generously scattered throughout the levels. Missing a jump necessitates re-starting your run from the very same position (or just a few gameplay steps back from it). If both players die, a well-designed swift self-revive feature minimizes those moments by allowing the players to quickly resurrect themselves.

It Takes Two is one of the best co-op games out there since it encourages you and your teammate to engage both in-game and outside of it. If you choose to play, you’ll enjoy an excellent multiplayer adventure with a strong storyline that encourages strong pair interaction.

How to play It Takes Two on Mac

The reason we recommend the cloud-gaming method to play this game on a Mac is that it is very easy to set up and doesn’t require the installation of anything. With the Boosteroid cloud-gaming service, you can start It Takes Two directly in your browser (Chrome and Opera are the recommended browsers), and it won’t matter that the game is not officially supported for Mac. Additionally, even if your Mac doesn’t meet the system requirements for the game, you’d still be able to play it through Boosteroid because the game would technically be running on a powerful gaming rig that your Mac would be linked to, thus enabling you to see and control the gameplay. Cloud technology gaming is, in general, a great opportunity for Mac users to play their favorite games directly on their Macs, without needing to jump through any hoops in order to do so.

It Takes Two on Mac M1

The only method that’s shown on this page that cannot be used on Mac M1 to play It Takes Two is the Boot Camp one. The Boot Camp Assistant tool isn’t available for M1 models, so you cannot install Windows on an M1 Mac in this way. You can, however, still use Parallels to get Windows on an M1 Mac and this is actually the recommended method for newer and more powerful Mac models, since Parallels receives frequent updates and has a dedicated Games Only setting.

That said, we still believe that your best option as a Mac user to play It Takes Two on your Mac is through a service such as Boosteroid. It works equally well on Intel and M1 Macs and it will require you to spend less than 10 minutes to get everything ready for gaming.

It Takes Two Set Up Methods

It Takes Two with Cloud Gaming

It Takes two is now available to play on cloud gaming servers. This assures NO
compatibility issues while playing on your Mac as well as top-notch performance.

Step 1. Get It Takes Two

Before playing It Takes Two make sure you get the game through the official websites. For the moment only the Steam version is compatible with cloud gaming services such as Boosteriod and Geforce.

All you need to do now is register for Boosteroid. This allows you to add It Takes Two to their Cloud Gaming Library. Once uploaded you can seamlessly play the game from your Mac, TV or Mobile Device.

Below, you will find our instructions on how to quickly set up a Boosteroid account and use it to play It Takes Two on your Mac.

To download It Takes Two on Mac. If you are planning to play the game through a Virtual Machine either with boot camp or parallels, you should first get Windows installed on the computer and then download the Windows version of the game.

Since It Takes Two doesn’t have a macOS version, the only way to download and install it on your Mac is to already have the Windows OS installed. It is possible to get Windows on your Mac, and there are two main methods to do so – using the Parallels virtualization program and with the help of the Boot Camp Assistant tool. Both methods have their pluses and minuses, but in general, the Parallels method is recommended for M1 Macs and other newer Mac models that have large amounts of RAM and powerful processors. On the other hand, the Boot Camp method is better for older Macs that don’t have as much RAM and CPU power. Note, however, that even when using the Boot Camp Assistant method, your Mac would still need to meet at least the minimum system requirements for the game that you want to play (It Takes Two, in this case), or else you won’t be able to run it even if you download it. Below are our instructions for both of those methods.

Playing It Takes Two On Mac with Parallels

If you think you may need a more detailed guide on how to use Parallels, you can find more information on this page.

Like with Parallels, we have a more detailed guide on how to use Boot Camp Assistant to install Windows on your Mac – simply click the link and follow the steps shown there.