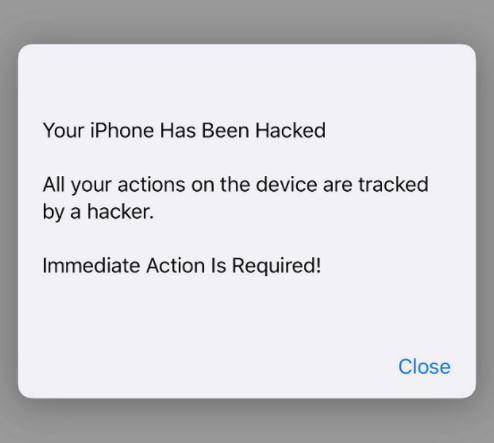 “Your iPhone has been hacked” Fix

“Your iPhone has been hacked“

Messages like this one are very common, and they are pretty much always an indication that the page you’ve been redirected to is fraudulent and is trying to mislead you into doing something that you shouldn’t. There are many different variations of this message – some may be trying to get you to download sketchy and potentially harmful software, others may try to steal your credit or debit card details, and so forth. The good news is that, if you see the “Your iPhone has been hacked” message in the device’s browser, this usually means that there’s nothing wrong with the device itself, and you can simply navigate away from the page that is triggering the intimidating message and no harm would be done to the device or to your virtual privacy and security.

“Your iPhone has been hacked, immediate action is required“

If your device has legitimately been hacked, the warning message informing you about the issue won’t come from your browser, but instead would come directly from the system. No website could automatically know the current security state of your device, which is already enough of a reason to mistrust such pop-ups that suddenly show up on the Internet.

If you see anything like the “Your iPhone has been hacked, immediate action is required” message in your browser when you try to visit a certain page, you should most definitely steer away from the page that’s triggering the fake warning, and you shouldn’t perform any of the actions recommended in the message. The sole goal of such fake warnings is to intimidate the user, making them more likely to react out of panic and tap on the fraudulent pop-up to fix a non-existent problem with their device. What happens next is that the victim of the online scam could be tricked into providing some personal data such as credit/debit card details and/or login credentials for their Apple ID or other valuable online accounts. It’s also possible that the victim is told to download an unwanted or outright harmful piece of software under the pretense that it would help secure the device (which needs no securing, to begin with).

How to tell if your iPhone has been hacked?

First and foremost, know that it’s very rare for an iPhone to actually get hacked. Chances are, if anyone manages to hack your phone, they’d have the expertise needed to remain unnoticed and undetected for a long time. That said, should your iPhone get hacked, there could still be some potential signs. Here are a couple of possible symptoms that you may notice if a hacker has broken into your iPhone:

There are other possible symptoms that may indicate the presence of a rogue or malicious software on your phone. However, if you get a message in the browser that tells you that your iPhone isn’t secure, you must know that this doesn’t give you any useful information regarding the current security state of your device. Instead, all it tells you is that the page you are currently on is fraudulent, potentially dangerous, and should be closed and avoided in the future.

Your iPhone has been hacked fix

Of course, it’s always a good idea to also check your device for any questionable apps that may be related to the warning, but unless you’ve noticed any of the other aforementioned symptoms, you will most likely not find anything. As we already said many times, the only thing such warnings in the browser tell you is that the site they are coming from is not to be trusted. Therefore, you must make sure to prevent that site or any other similar sites from opening in your browser. Here are the exact actions that we recommend: