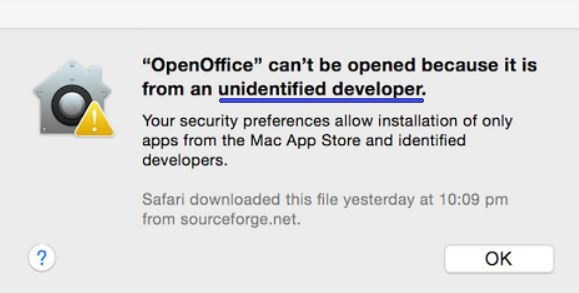 Mac cannot be opened because it is from an unidentified developer

Before we give show you the way you can still open an app from an unidentified developer, we must first warn you that this may not always be a good idea. Though at times, the restrictive, closed-platform policy of Apple operating systems (such as macOS) may seem excessive, it’s also one of the main reasons why Apple products are much less likely to get infected by viruses or malware. This restrictiveness is, first and foremost, there to protect you and your devices, so most of the time, there’s a good reason why your Mac doesn’t let you open a certain app. That said, it’s not uncommon for macOS to prevent a user from opening a given app that is perfectly safe and has nothing wrong with it. As mentioned, this is what happens when the application’s developer isn’t in the list of developers that Apple recognizes and trusts. There are certain hoops that third-party developers need to jump through before Apple’s macOS would start to regard them as “identified” and, in turn, trusted developers. However, not everyone is willing to jump through those hoops, even if the developer’s software is legitimate, which could lead to situations such as this one.

The important takeaway here is that it is perfectly possible for a given app to be safe and legitimate, even if macOS doesn’t recognize or trust its developer, but you need to be absolutely certain that the app is indeed harmless before you choose to override the built-in macOS security restrictions and open the app in question. With that out of the way, we will now show you how you can open apps that trigger the “Unidentified developer” warning.

Your macOS will only grant you the option to open a specific app from an unidentified developer if you’ve already tried to open that app normally and have received the “Unidentified developer” warning. Here are the exact steps to circumvent that warning:

Opening apps from outside the App Store