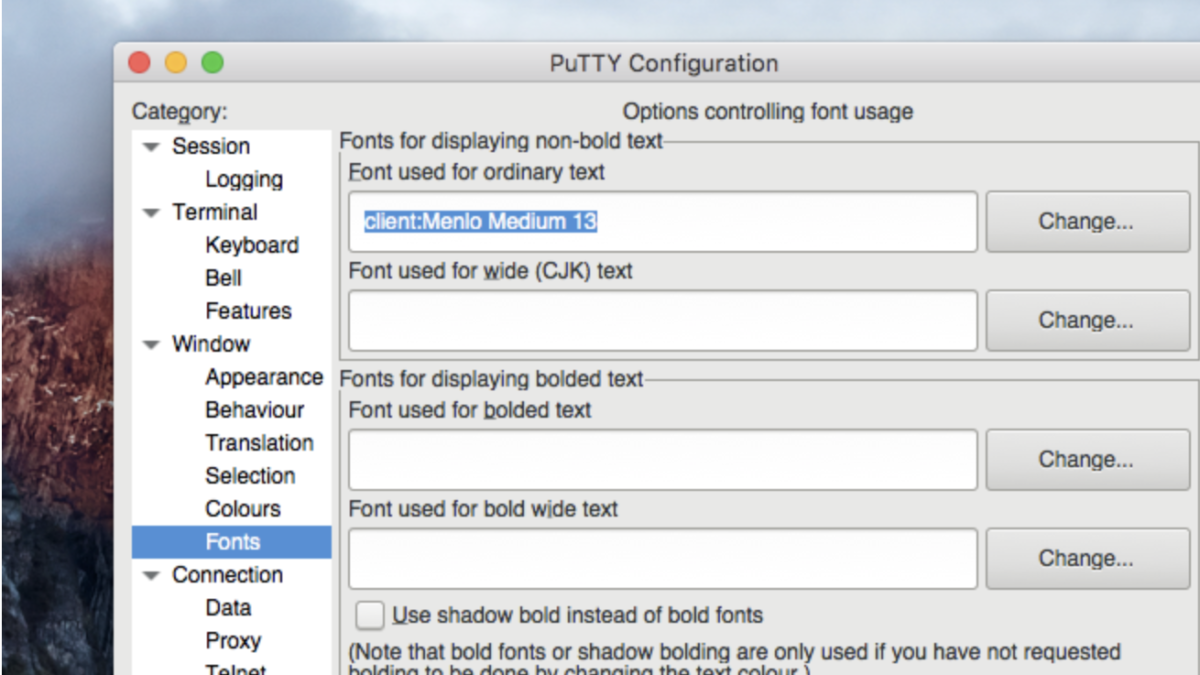 PuTTY is a Windows SSH client that’s also available for Mac – unlike other SSH clients, this tool offers a user interface and allows the user to save their login data and session information.

PuTTY is available on Mac through its macOS port.

Your Mac already has a built-in SSH client – the Terminal tool that you can find in the Utilities folder. For the most part, Terminal and PuTTY can be used in the same way. However, the thing that may make downloading and installing PuTTY and using it instead of your Mac’s Terminal is that the latter offers a graphical user interface (GUI). This interface can help with using PuTTY’s command line by allowing you to customize its settings in a more convenient way, rather than having to do everything by entering commands into the command line. Note that you’d still need to use commands for most of your work, but having a GUI for the tool’s settings can still be very helpful.

Other notable things that you can do in PuTTY that you can’t do in Terminal are saving your login data and saving information about your previous sessions. This can speed up the process of logging back into SSH servers in the future, and also makes switching between SSH servers quicker and more convenient.

As you can see, the process of downloading and installing PuTTY on a Mac isn’t particularly straightforward, and some preparation is required to get everything working. The good news is that all of this can be done for free, so if you have some time and patience to complete the different steps of the installation process, here are the details of how to download PuTTY on your Mac:

How to install PuTTY on Mac

To install PuTTY on Mac, you will need to do it through the Terminal app on your Mac, by entering and executing a command that will automatically install PuTTY. Before you can install PuTTY, however, you’ll first need Xcode, Xcode Command Line Tools, and MacPorts.

Installing PuTTY on a Mac is relatively easy, but there are several steps that you’d need to complete. If there isn’t a specific reason you need PuTTY on your Mac, it may be better to stick with your Mac’s Terminal tool, which can do pretty much the same things that PuTTY can. There are only a couple of important differences that set the two apart and make PuTTY worth installing on your Mac – its GUI and the option that it gives you to save login and session data. If you need these features to make your work with a command line easier, follow the instructions shown above to download and install PuTTY on your Mac. If, instead, you need a more flexible SSH client that has more features and is more customizable, check out the following paragraph.

To download and install PuTTy on Mac M1 Macbooks is a similar process to the one explained in detail above.

The main PuTTY alternative for Mac is Terminal – this is Mac’s own command-line tool that can be used for accessing SSH servers and is preinstalled on every Mac. Other popular PuTTY alternatives for Mac are iTerm2, Termius, and ZOC Terminal.

Here is a quick rundown of the main characteristics of those four PuTTY alternatives:

Terminal: A potent command line and SSH client tool that should be enough for the majority of users who need to access SSH servers. To use it successfully, some prior knowledge of how to work with a command line is required.

iTerm2: Designed to be a full Terminal replacement, this tool offers a lot more customization options and has a big number of useful features that can make working with the command line more effective and efficient. People who already know how to work with Terminal should have no problem getting used to iTerm2. iTerm2 can be downloaded and installed for free on your Mac, for more information, click here.

Termius: A specialized SSH client that offers GUI for secure file transfer, so you won’t need to use command line commands to transfer data between your device and devices that you are connected to via the SSH protocol. Termius is also available for both computers and mobile devices. Termius has a free and a paid version, with only the latter including the data transfer GUI.

ZOC Terminal: ZOC Terminal is similar to iTerm2 in that it offers a lot of customization options for its command line and also includes a lot of helpful functions such as split panels, multiple tabs, the option to color-code different SSH servers, and more. It is a free tool, but it doesn’t have any sort of GUI.

We also have a more detailed article, where we give more information about each of these variants. If you are interested, here is a link to that post.