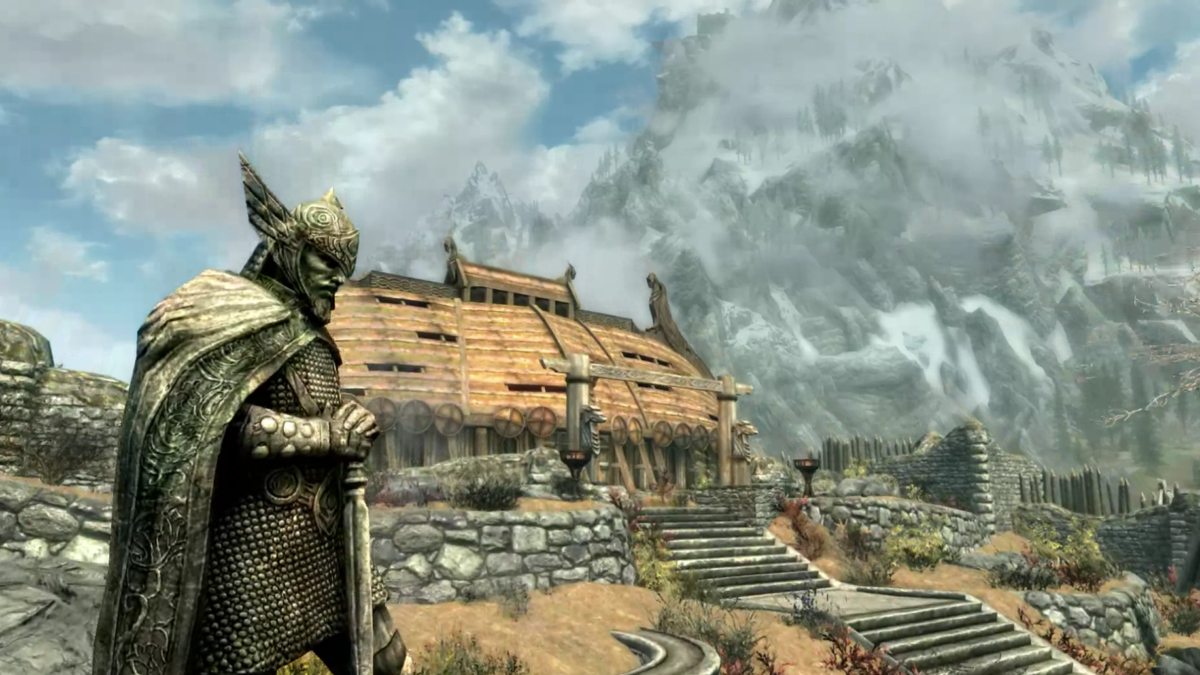 The Elder Scrolls V: Skyrim is an action role-playing video game that can be played from a first- or third-person perspective. The title is the fifth major edition in The Elder Scrolls series and takes place in a fictional land called Skyrim.

The events of the game develop two hundred years after the events of the previous game, Oblivion. The main plot follows the adventures of a Dragonborn hero who has set on a quest to try to stop Alduin, a powerful dragon who is said to destroy the world.

Players take on the role of a Dragonborn (a character that has the body of a mortal and the soul of a dragon) and set on completing different missions.

Each player starts the game by choosing their character’s gender and appearance, as well as one of ten available races.

Characters have three main attributes: Health, (which indicates how much damage they can take before they die), Magicka (which indicates how many magic spells they can cast), and Stamina, (used when performing heavy “power attacks” during combat). These attributes naturally replenish over time, or they can be replenished more quickly via the use of potions or regenerating spells.

A primary means by which characters progress is by leveling up their skills. There are 18 skills to acquire in the game, and they are fairly split among enhancing the character’s combat, magic, and stealth abilities. An experience meter fills up whenever the character does an action that contributes to the development of a certain skill.

Compared to the Imperial Province of Cyrodiil from the fourth installment, the land of Skyrim is more diverse and consists of a variety of environments, including vast stretches of wilderness, dungeons, caverns, cities, towns, castles, and villages.

As in previous games in the series, the player can explore any area of the game world at any time. He may also put off or completely ignore the main plot if they want to. Besides, the player may take up a job like a farmer or freely roam around each of the game’s many settlements.

Players can move around the game’s world by walking, riding horses, paying for a ride from a city’s stable, or using the game’s fast-travel system to send a character right to a place they’ve already been.

The developers have successfully created a feeling of diversity by dividing the world into nine geographically unique sectors (called holds), each of them consisting of different animals, flora, and terrain.

Combat in The Elder Scrolls V: Skyrim features dual-wielding, meaning that the player can use two weapons, one in each hand. They can also boost their combat effectiveness by using both physical weapons and magic spells at the same time, or by switching between them using a quick-access menu.

Players can buy weapons and armor, find them in containers scattered around the map, take them from dead bodies, steal them, or forge them. Magic spells can also be purchased, stolen, and/or unlocked by locating spell tomes.

There is a diverse range of melee weapons available for use in both close and long-range combat. Shields can be used defensively to block attacks and reduce damage taken or offensively to make strikes. Special Power Attacks, which spend the character’s stamina, can be used to briefly immobilize foes and inflict more damage.

Casting a spell can have a number of effects, both in a battle (such as harming or confusing foes, summoning other beings, and healing the player’s health and/or stamina) and out of battle (such as showing the way to an objective or shedding light in a dark location).

If the player doesn’t want to enter direct battle, they can switch to stealth mode to rob unsuspecting foes or launch devastating surprise strikes.

The game’s world is populated with non-playable characters (NPCs) who can give the player varied-in-difficulty side missions. The player can interact with them in a number of ways, including by having conversations with them, getting married to some of them, or fighting with them.

Some NPCs can be befriended or hired as companions that go with the player in battle. Aside from taking companions, the player can also join a faction, which is a group of NPCs with similar goals and objectives, and complete quests for it to move forward in the game.

A revamped system allows NPCs to farm, mill, and mine in the game world and interact with each other and the environment in a more natural way.

The player may run into different enemies and wild animals as they explore the game environment. Many of them will attack the player upon sight, while others may flee instead.

The Elder Scrolls: Skyrim is the first entry in the series where dragons can be encountered in the game’s wilderness.

Dragons appear at random and fight other creatures, NPCs, and the player if provoked. When near human settlements, certain dragons may launch attacks.

The visual design of Skyrim can be described as a refreshing change from the design that players have seen in the fourth installment, Oblivion. Most of the game’s world is handcrafted, giving it a unique and individualized look. The misty mountain environment is recreated with dense fogs and swirling snowstorms, which make it feel more realistic. Thanks to the use of effects like dynamic lighting and shadows, in-game objects have a more lifelike look.

A lot of attention has been paid to the creation of the game’s flora. The designers have worked closely to recreate the real way trees move in the wind by adding mass to their branches. Furthermore, they have added wind effects to the way water flows in rivers and streams. The game also impresses with dynamic snowfall effects on the environment, as opposed to the static snow that was portrayed in earlier games.

The animators of the game have also done great work, giving the characters more natural transitions between movements like walking, running, and sprinting.

The soundtrack of Skyrim alone is worth a separate review. The main theme, “Dragonborn”, was recorded with a choir of more than 30 people singing in a made-up dragon language, specially created for the game. The voice acting is also noteworthy – there are over 60,000 lines of dialogue in the game, which are the work of more than 70 voice actors.

A Special Edition of the game is available to the fans. It is a remastered version of the epic fantasy, that offers players reworked graphics and some engine upgrades that can immerse them in the fictional world of Skyrim like never before.

Can you play The Elder Scrolls V: Skyrim on Mac?

Now, this should not discourage you because Parallels and Boot Camp Assistant are two programs that allow Mac users to run Windows programs and games on a macOS by installing Windows OS on it. In this way, you can download the Windows version of The Elder Scrolls V: Skyrim on your Mac and start playing immediately as if you are playing on a Windows PC.

Before you try to play The Elder Scrolls V: Skyrim for Windows OS on a Mac, you can learn more about how to use each of these programs by reading the instructions below.

How to download The Elder Scrolls V: Skyrim on Mac?

Before downloading and installing The Elder Scrolls V: Skyrim on a Mac, a Windows virtual machine must be set up. This may sound like something complicated but if you have an application like Parallels or Boot Camp Assistant, you can run Windows software on your Mac and play games that weren’t made for macOS with ease.

Once you have Windows set up, the Elder Scrolls V: Skyrim, can be downloaded from a gaming shop and installed on the Windows OS virtual machine like any other game.

How to play The Elder Scrolls V: Skyrim on Mac?

Currently the best way to play the game is to get Xbox Game Pass for 1$.

How to play The Elder Scrolls V: Skyrim on Mac M1?

You can use Xbox Game Pass on M1, M2 or any other device through its cloud streaming.

If you don’t want to use streaming or Game Pass, The Elder Scrolls V: Skyrim can be played on a Mac M1 by using a Windows virtual machine created with Parallels. You can find more information about the program in the instructions that follow. Before that however, you will need to purchase the game (hence why we still recommend Xbox Game Pass – it costs 1$ in the first month.

To play The Elder Scrolls V: Skyrim on Mac, you need to first get the game. You need to purchase it only if you don’t use Xbox Game Pass. If you use game pass, just install the game from there once you are done with the Parallels instructions below.

Purchase Skyrim from one of these places:

It’s important to keep in mind that the workarounds we provide for gaming cannot guarantee you the same experience as playing on a Windows PC. However, these methods can help you play The Elder Scrolls V: Skyrim and other non-supported Mac games with adequate quality.

A full Parallels Guide is here to give you more detailed instructions on Parallels, in case you need assistance.