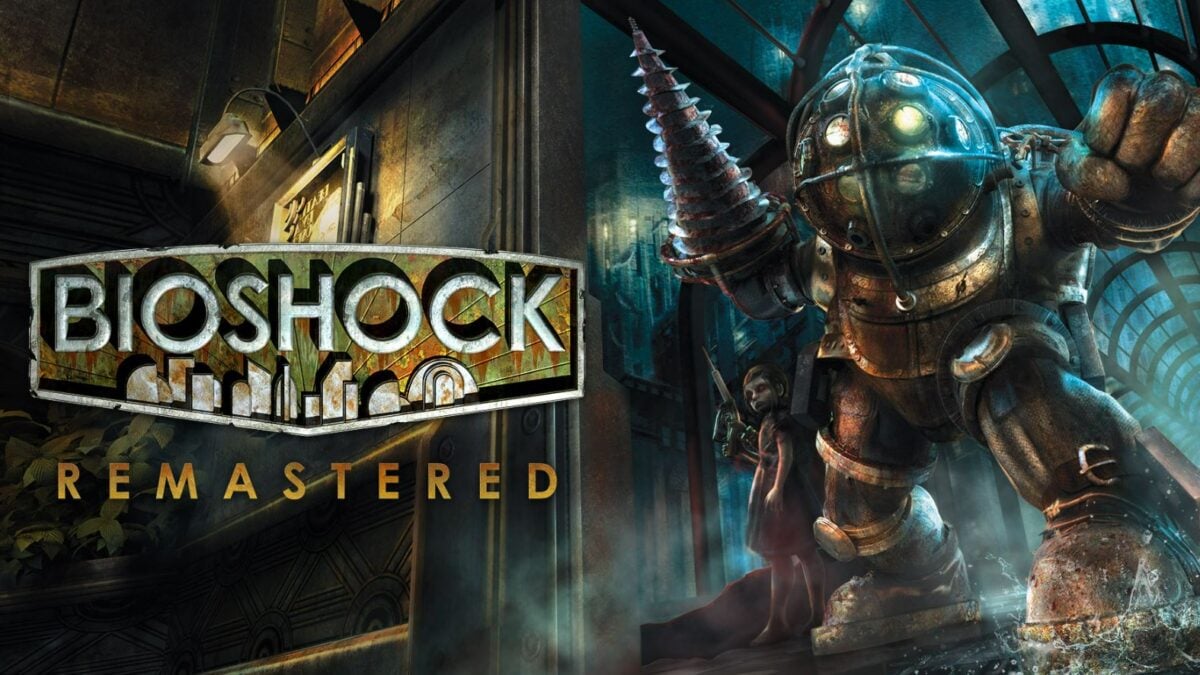 BioShock Remastered is a beloved FPS horror game that’s can be played on Mac without the need for any complex workaround solutions. BioShock Remastered has an official macOS version that you can download from Steam on your Mac in to play the game natively.

The original BioShock game was released all the way back in 2007, and it received universal acclaim from both users and critics for its compelling story and an immersive and unique setting, thus forever giving this gaming title the status of a classic and putting it next to other fan-favorites such as Half-Life 2, F.E.A.R, the Deus Ex series, or the Dead Space games.

In 2016, BioShock was remastered, which gave the game improved graphics, fixed some bugs, and introduced some other improvements. However, at its core, BioShock Remastered is still very much the same game as the original from 2007 and, in our opinion, that’s mostly a good thing.

Currently, BioShock Remastered is perfectly playable on Mac computers through its macOS version that’s available on Steam. Furthermore, considering that the remastered version is already 6 years old, and the original game came out 15 years ago, the system requirements for the game aren’t high, so the majority of Macs released in the past 10 years should have no problem running it.

This leaves us with only one question: Why would you play this 15-year-old game in 2022?

BioShock – one of the classics

Now, obviously, if you are looking for the latest, hottest, prettiest game out there, BioShock may not be for you. That’s not to say that the game isn’t pretty or engaging, but it’s still a rather old game and this would probably turn some people away from it. However, there are reasons why this game is within pretty much every list of the best single-player shooters of all time, and we are about to explore what those reasons are, while also not forgetting about the main shortcomings of this game.

As we mentioned at the start, BioShock is a single-player First-Person Shooter game with horror elements. One of the genre tags on Steam under BioShock is horror, but we’d say the focus here is more on the FPS aspect and the horror part is there to provide context for the story and setting and to add flavor to the game without taking over. This, in turn, makes the game thrilling and keeps it engaging without causing it to become actually scary, to the point where playing it starts to become emotionally draining. In our opinion, BioShock strikes the perfect balance between horror thrills, to support the engaging story and enhance the immersive setting, and dynamic and well-thought-out gameplay. Obviously, this isn’t a game in which you get to take part in hectic online matches, instead, this is a single-player experience that draws you in with a believable, yet fantastical and bizarre world that compels you to keep going in order to find out what’s behind the next corner.

BioShock is one of those single-player games that doesn’t hold you by the hand and doesn’t spoon-feed you all information that’s relevant to its story or gameplay. The game takes place in 1960. You play as Jack, the game’s protagonist, whose plane crashes in the middle of the ocean. Jack manages to survive by swimming to a nearby lighthouse, where he boards a bathysphere – a type of rudimentary submarine – and descents to the bottom of the ocean. There, he finds a living, breathing underwater city called Rapture that used to be prosperous but has now fallen into decay. From there, you begin your expiration of the place, slowly uncovering the many secrets of its past, and figuring out your role in its present. We won’t get into details about the story, since this is one of the game’s most praised aspects, and we wouldn’t want to spoil it for anyone who has never played BioShock. What we will say about the story, however, is that not only is it very well-written, but the game’s developers have made sure to deliver it in a mature way that respects the player’s ability to figure things out for themselves, rather than spoon-feeding them everything. Overall, if you value the story aspect in single-player games, then you should absolutely give BioShock a try, as it stands out as one of the games with the best stories of all time.

Another praised aspect of this game is its immersive and believable world – the city of Rapture. It is a bizarre alien world, yet one that makes sense and feels like an actual place where people used to live. Every part of the city is highly detailed and makes sense in the context of the overall setting, making you feel like you are the game’s actual protagonist, and it is you, who is exploring the halls and corridors of Rapture. If you are someone who enjoys single-player games with a great atmosphere, then BioShock is a must-try for this aspect alone.

In 2022, the gameplay of BioShock certainly shows its age, yet it still manages to deliver tons of fun and challenges. The game has very good enemy AI that requires you to think creatively and pay attention if you are to survive your encounters with it. To help you with such encounters, you have access to a well-varied selection of firearms, melee weapons, and even special powers that you gradually learn and improve throughout the game. This variety in the tools that you can use to dispose of your enemies helps keep the gameplay fresh and exciting most of the time. However, and this is where we must mention one of the more pronounced shortcomings of BioShock, as fun as its gameplay can be, after a while, it tends to become repetitive. The specific tasks you need to complete aren’t as imaginative as other aspects of the game, and at a certain point, you may find yourself simply walking and shooting, shooting and walking, without much else in between, until you reach the next level only to do the same in it as well. Then again, this is an FPS – the game is about shooting enemies, so maybe not everyone may feel the same way about this potential downside of BioShock.

In addition to the occasionally repetitive gameplay, the only other significant issue we have with BioShock is a specific game-breaking bug that occurs at the start of the Fort Frolic level, where you need to kill a bunch of enemies before a certain door would open that you need to go through. In some instances, the trigger for the door won’t work even after you kill all enemies in the area, thus preventing you from going any further. Apparently, this bug has been around since the game’s initial release and hasn’t been resolved even in the Remastered version. This bug happens only occasionally, so, as long as you’ve saved your progress just before entering the Fort Frolic level, you should be fine, but it’s still something to keep in mind.

BioShock absolutely deserves to be considered one of the best single-player FPS games of all time. Even though in many ways, the game now shows its age, its masterfully-crafted world, its amazing story, and its captivating atmosphere in combination with competent and well-thought-out gameplay with great AI, is more than enough for us to recommend this title to anyone who enjoys single-player games and has a few hours to spare after work and on the weekends to explore the run-down and mysterious Rapture city and unravel its dark secrets.

Can you play BioShock Remastered on Mac?

BioShock Remastered can be played on Mac via its macOS version that can be downloaded through Steam. All you need to do to play BioShock on Mac is get the Steam client app, install it, search in it for BioShock, and install the game.

Luckily for Mac users who’d like to try this game, BioShock Remastered is available for macOS and so you won’t have to use any complex workaround methods to get it running on your Mac. Additionally, the game doesn’t have particularly high system requirements, so chances are that you’d be able to play it on your Mac if the machine was manufactured within the past decade. That said, it may still be a good idea to check the exact requirements before purchasing the game, so here they are:

How to play BioShock Remastered on Mac

BioShock Remastered isn’t a particularly large game (around 25 GB), but if you’d rather save some storage space on your Mac, it’s possible to play this game without even downloading it. The way to do this is to use a cloud gaming service called Boosteroid, which will allow you to stream BioShock Remastered, as well as many other games (including ones that don’t have Mac versions), to your Mac. Here are the exact instructions on how to use this service to play BioShock Remastered on Mac.

Now you will need to register for Boosteroid. This allows you to add BioShock Remastered to their Cloud Gaming Library. Once uploaded you can seamlessly play the game from your Mac, TV, or Mobile Device.

To download BioShock Remastered on Mac, you will need to use the Steam client app that’s available for macOS on Steam’s site. Once you install the app, open it, log in to your Steam account, search for BioShock Remastered, and download it on your Mac.

Downloading games that have macOS versions and playing them on Mac is typically very quick and easy. The only time-consuming part is waiting for the game to get downloaded. Here are the exact steps you’d need to complete if you want to play BioShock Remastered on your Mac:

When M1 Macs first started getting released, a lot of apps available for Intel Macs couldn’t run on their M1 counterparts due to different CPU architecture. However, this issue is now long gone. Some time ago, Apple developed Rosetta, an emulation software that allows apps for Intel Macs to run on Macs with M1 chips with little to no difference in performance. A Rosetta installation prompt would automatically show up the first time you try to run an app developed for an Intel Mac, and all you’d need to do is agree to the installation. From then on, Rosetta would turn on automatically when it is required to run an Intel Mac app. This also applies to games such as BioShock Remastered.