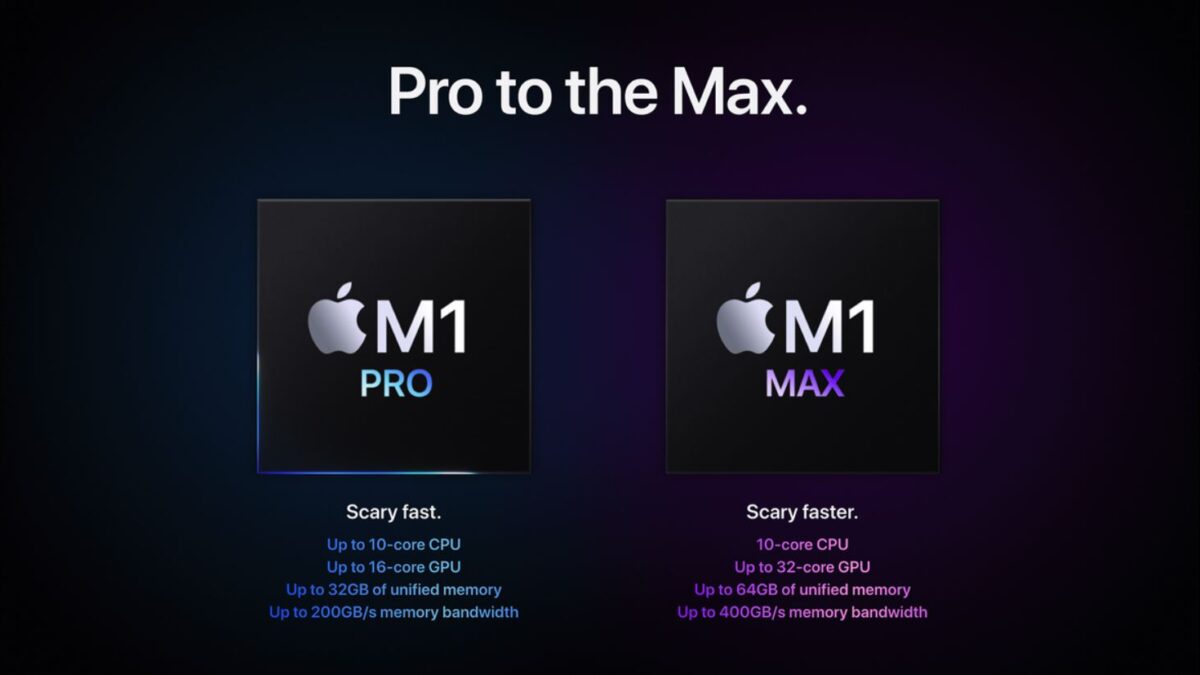 This makes these high-end Apple laptops rather impressive, high-performance machines, capable of handling very heavy workloads thanks to their highly-efficient memory usage. However, if you are thinking about getting a 16-inch 2021 MacBook Pro, you may have difficulty deciding between the M1 Pro and the M1 Max variant. After all, even though the base M1 Pro chip is capable of delivering top-tier performance, it does fall behind the even more souped-up M1 Max chip. Therefore, it’s important to have a good understanding of the capabilities of the two chips in order to make an informed decision as to whether to get the M1 Pro or the M1 Max 16-inch MacBook Pro.

The two high-end M1 chips have a lot in common – both of them have 10 CPU cores, 8 of which are optimized for high-performance and two optimized for efficiency. The two chips have a 16-core Neural Engine, Video decode engines, and Media engine for hardware-accelerated ProRes, ProRes RAW, H.264, and HEVC.

However, despite the similarities, the M1 Max has some clear advantages over the M1 Pro – the M1 Max has a 32-core GPU, while the entry-level M1 Pro has a 16-core GPU (which can be upgraded to have 32-cores for an extra $400). The memory bandwidth of the M1 Max is 400GB/s, compared to the M1 Pro’s 200GB/s. Additionally, the M1 Max starts with 32 GB unified memory and can be configured to up to 64 GB, whereas the base variant of the M1 Pro has 16 GB and can go up to 32 GB but not 64. Also, the Max model has two ProRes encode and decode engines – the Pro model has only a single ProRes engine. It’s the same with the video encode engines – the M1 Pro has only a single one and the Max option has two.

Above, we showed you the raw specs of the two chips, but what do these specs mean in practice? How do they translate into the real world? This is, in fact, the most important question that you need to answer for yourself before you make the decision to buy either MacBook Pro variant.

To get a good idea of the capabilities of the two chips, they need to be tested with software that forces them to use a lot of resources. Programs like Adobe After Effect, Final Cut Pro, Lightroom, and Google Chrome with many tabs open at the same time are some common examples of programs used for testing Mac M1 performance.

There are plenty of tests and bench scores that pit these two chips, and in most of them, the M1 Pro chip delivers a very good performance. It has little trouble exporting 4K videos and is even able to export 8K RAW footage, albeit with some stuttering.

When multiple demanding apps, such as Final Cut Pro, Chrome, Safari, and Lightroom are open on the M1 Pro, it is capable of handling them with little to no performance issues, which is a testament to how efficiently the M1 chips, in general, use their memory.

Of course, in all those tests, the M1 Max outperforms the Pro model. In many cases, the difference is quite significant, especially if the task is more complex – for instance, exporting 8K videos. Obviously, this is to be expected and is reflected in the price of the two 16-inch MacBook Pro variants. However, the fact that the M1 Pro is still able to keep up and handle tasks that an Intel CPU with similar specs would likely struggle with comes to show that this is still a very powerful chip that shouldn’t be underestimated.

If you are interested in more concrete data, in Geekbench tests for single-core performance, the M1 Pro’s score is 1666 and the single-core score of the M1 Max is 1781. In multi-core tests, the Pro model scores 9924 and the Max variant has a  score of 12785. The Metal benchmarks for the M1 Pro and the M1 Max are 38138 and 64134, respectively. As you can see, there’s an undeniable and also quite significant difference in the capabilities of the two chips. However, the important takeaway is that the difference, in practice, can mainly be felt when very demanding tasks are performed on the two MacBooks. The truth is that the majority of users are highly unlikely to ever need their MacBooks to handle workloads that would make the performance difference between the two chips noticeable.

Do you need the more powerful M1 Max chip?

A general rule of thumb when talking about high-end machines such as the 16-inch MacBook Pro M1 Pro and M1 Max is that, if you have to ask whether you need the more powerful variant, you most likely don’t need it. That said, there are undeniably instances when it would be beneficial to have the extra power that comes with the M1 Max chip. Here are the main examples of such instances:

You are a professional creator who frequently needs to use advanced editing software – Professional creators who work with resource-intensive editing software are among the people who are most likely to really benefit from getting the more powerful M1 Max version of the 16-inch MacBook Pro. While the M1 Pro chip is still very good at handling video/photo-editing software and exporting HD videos if you often need to work with 4K or 8K footage, the extra power from the M1 Max chip will be noticeable. Performance during editing will be smooth regardless of how heavy the workload is, and rendering will also be significantly faster. Additionally, remember that the M1 Max chip has two encode and decode ProRes engines and two video encode engines, while the M1 Pro has only one of each. The extra ProRes and video encode engines can further help you with your creative and editing work, which is why you may want to consider getting the M1 Max MacBook Pro.

You are a professional software developer who needs a system capable of handling heavy workflows – the other type of professionals who may see an actual benefit in getting the M1 Max option are software developers. The more powerful Max chip is notably better at resource-intensive tasks such as data compiling, which can help streamline one’s workflow and improve productivity.

You multitask with demanding software – This is more subjective because multitasking can mean different things to different people. Here, what we mean by multitasking is really using a lot of resource-hungry programs at the same time, rather than just having a couple more Safari tabs open than most people do. The M1 Pro chip can handle a lot of multitasking, so the majority of people are unlikely to get any performance hiccups with it. However, if you are prone to really pushing your computer to its limits by having a lot of stuff running at the same time, then you may consider the M1 Max as the option that would fit your needs better.

You want to play games on your MacBook – It’s well-known that Macs aren’t designed as gaming machines, but, as we’ve many times shown on our site, playing games on a Mac is definitely an option, especially if you have a higher-end Mac. However, as you probably already know, games, especially newer ones, are highly-demanding programs, and it’s always welcome to have more powerful hardware. On the other hand, however, the difference in gaming performance may not be worth the $1000 increase between the base M1 Pro and the base M1 Max MacBook Pro models. The M1 Pro model is still perfectly capable of running demanding games, and if gaming is your main reason to question which of the two Macs you should get, you may be better off paying an extra $400 for the 32 GB M1 Pro MacBook Pro configuration, rather than getting the M1 Max variant.

You want a more future-proof MacBook – Purchasing the higher-end M1 Max model of the MacBook Pro will get you a more future-proof machine that should deliver top performance for a longer period of time. That said, how significant the difference in the longevity of the two MacBook Pro variants is not clear. Both machines are powered by the same M1 technology – one of them is simply more powerful, which could mean that some years from now, it would be performing better with the newer programs. Despite that, they should still generally age at the same rate, so the difference here may not be as significant and worth the extra $1000.

Both of these machines offer incredible performance and are capable of handling heavy workloads with impressive smoothness. However, there’s a definite difference in both their power and their price, making them good for different types of people. The vast majority of regular users as well as a large portion of professionals would most likely find that the M1 Pro model meets all their needs and requirements without even meeting its full potential. On the other hand, professionals who know that they need all the power they could get from their new MacBook will appreciate the expanded performance capabilities provided by the M1 Max model, as this has the potential to greatly boost their productivity and streamline their workflows.

Top Reasons Why You Need a VPN for FireStick