4 days ago 17 min read
We use cookies to enhance your browsing experience, serve personalized ads or content, and analyze our traffic. By clicking "Got it", you consent to our use of cookies.
Learn more Got it!
We are supported by our audience. When you purchase through some links on Macresearch.org, we may earn a commission. Here’s why you can trust us. 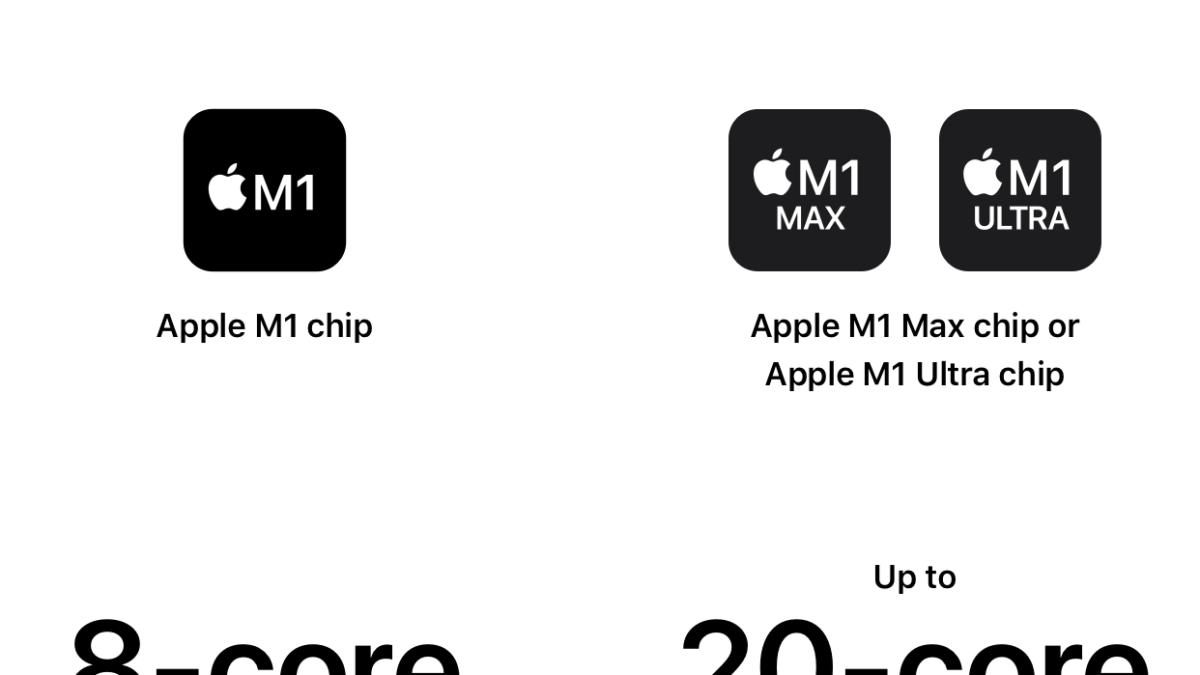 Apple just released its latest desktop computer – Mac Studio – and it is an impressive machine designed to deliver all the computing power that even the most demanding users may need. The Mac Studio is equipped with either an M1 Max chip or an M1 Ultra chip, depending on the configuration. Both of those M1 chips are designed to deliver high levels of performance, making the Mac Studio desktop a very potent machine.

The Mac Studio shares a lot of similarities with the Mac M1 Mini computer – both machines are powered by M1 chips, both have a 16-core Neural Engine, both have two USB- A ports, and the two computers also look quite similar to one another. If you want to get an Apple desktop, those two machines would likely be your main consideration. There are, of course, the Mac Pro and the Intel Mac Mini, but since they are older, Intel-based models, it would make more to go for the newer and more efficient M1-based Apple desktops.

Despite the mentioned similarities between the Mac Studio and the M1 Mini, there are a lot more differences, and you’d need to be well aware of those differences if you are to make the right choice for you. Both computers are great at what they are supposed to do, but, depending on your needs, you may find one to be a better fit for you than the other. Below, we will go over the main characteristics of these two Apple computers, and we will compare them so that you can more easily decide for yourself which one is the better option for you.

A few words about the M1 chips

Since one of the main aspects that we must talk about when going over the differences between the two computers is their M1 chipsets, we must first say a few words about the specific way that M1 systems function. In a more conventional computer system, you’d have a separate CPU and GPU and your RAM (Memory) and VRAM (Video Memory) would also be separate. The unique thing about M1 Macs (both desktop and laptop) is that their CPU and GPU are placed on the same chip and share the same memory pool, which is why the M1 chips are referred to as SoC (System on a chip). In other words, the M1 chip contains both the computer’s CPU and GPU. This vastly improves the efficiency of data transfer, and it also means that there’s a single pool of memory that is used both for processing and graphically-intensive tasks, rather than having the VRAM and RAM be separate.

The most important difference between the two Mac variants is their chipsets. While both machines are equipped with an M1 chip variant, the Mac Mini M1 is equipped with the entry-level M1 chip, whereas the Mac Ultra is powered by either the M1 Max or the M1 Ultra chip.

The base M1 chip is highly-efficient, yet still very powerful. It has 8 CPU cores, 4 of which are optimized for efficiency, while the other 4 are optimized for performance. The M1 chip also has 8 GPU cores and a 16-core Neural Engine. In terms of memory, the entry-level Mac Mini M1 comes with 8 GB of it, but you can also instead go for a 16 GB configuration, which adds $200 to the overall price of the machine. The Mac Mini M1 starts off with 256 GB of SSD storage, which can be configured to up to 2 TB. Overall, for most users, the Mac Mini M1 offers plenty of power without being too expensive (the entry-level variant with 8 GB of memory and 256 GB of storage costs $699.00). Besides, if you configure it to have more memory and bigger storage, you can get a rather powerful machine, while still not spending too much.

As we already noted, there are two main chipset variants for the M1 Ultra – the M1 Max option and the M1 Ultra option. The M1 Max chip is a more souped-up variation of the base M1 chip. It has 10 CPU cores, 8 of which are optimized for high-performance, with only two being optimized for efficiency. The entry-level version of the M1 Max has 24 GPU cores, but you can also choose a 32 GPU core configuration. The chip’s memory starts from 32 GB and can be configured to 64 GB. In the Mac Studio, the entry-level M1 Max variant has 512 GB of SSD storage, which can be configured to up to 8 TB. Anyway you look at it, the M1 Max Mac Studio variant is a lot more powerful than the Mac Mini M1 is a robust and potent machine with tons of computing power. However, its price is also significantly higher – it starts at $1,999 and only goes up if you pick any of the higher configurations.

Lastly, we should talk about the newly-released M1 Ultra chip that powers the second variant of the Mac Studio. Currently, the M1 Ultra chip is only available on the Mac Studio desktop. At its core, the M1 Ultra is two M1 Max chips fused into one. This means that it basically has twice the power of an M1 Max chip, which, in turn, makes the M1 Ultra Mac Studio variant twice as powerful as its M1 Max counterpart. More specifically, the M1 Ultra-powered Mac Studio has a 20-core CPU, with 16 high-performance and 4 efficiency cores, and a 48-core GPU, configurable to 64 cores. It also comes with 64 GB of unified memory, which can go up to 128 GB.

In terms of ports and overall connectivity, the two Mac variants are similar, but again, the Mac Studio has some clear advantages over the Mac Mini M1. While both machines offer two USB-A ports and a single HDMI port, the Mac Mini M1 comes with only two Thunderbolt ports, regardless of the specific configuration. With the Mac Studio, you can go up to 6 Thunderbolt ports.

Regarding display support, you can connect one 4K and one 6K monitors to the M1 Mini, whereas the Mac Studio can support up to five displays – four 6K monitors and a single 4K monitor.

Last, but not least, the Mac Studio comes with an SDXC card slot – something that’s not available in the M1 Mini.

Despite the differences in connectivity and the more options that the Mac Studio offers, the majority of users should still get all the connectivity options that they may need from the M1 Mini. Not many people would need more than two Thunderbolt ports at the same time, and even fewer would need to connect several 6K displays to their Mac. Of course, it’s nice to have a wider array of options, but unless you specifically need the added connectivity perks that the Mac Studio offers, this shouldn’t be a reason to pick it over the M1 Mini.

The cheapest of the three computers is obviously the Mac Mini M1 – its price starts at $699. Choosing the 16 GB configuration, rather than the 8 GB one, adds $200 to the price. You can also get the M1 Mini with bigger storage – the maximum is 2 TB, which costs an extra $800.

The M1 Max Mac Studio is significantly more expensive – its price starts at $1999. If you want the 64 GB Memory configuration, that would be another $400. With this Mac Studio version, you can also choose a configuration with 32 GPU cores rather than 24 cores, which would cost an extra $200. You can also get more storage – here the maximum is 8 TB (+ $2,200).

Lastly, we come to the jewel of the crown, the super souped-up M1 Ultra Mac Studio variation that has a starting price of $3,999. As mentioned, the base variant comes with 64 GB of unified memory, but this could be configured to 128 GB, for the cost of another $800. Here, you can also get a configuration with more GPU cores – the starting option has 48 GPU cores, but for an extra $800, the number of GPU cores could go up to 64. Like its M1 Max counterpart, the M1 Ultra Mac Studio can also be configured to a maximum of 8 TB storage.

As you can see, there is a very large difference between the smaller Mac Mini M1 and the beast of a computer that the M1 Ultra Mac Studio is. Even if you have the budget for any of the Mac Studio configurations, this doesn’t necessarily mean that this is the computer you should get. Note that the M1 Mini is still a very dependable and quite powerful machine that should be enough for pretty much everything that a regular user may need. The M1 Mini is by no means a weak computer. It is a great productivity machine with high efficiency.

However, if you know that you simply need more, then you may set your sights on the powerful Mac Studio variants, both of which are great machines with a lot to offer. In our opinion, the M1 Max version of the Mac Studio should provide all the computing power that all but the most demanding of users may need. Even if it’s not powered by the M1 Ultra chip, it’s still a computer that has a highly potent CPU as well as the ability to process tasks that are very graphically demanding (especially if you go for its 32 GPU-core variant, which adds only $200 more to the machine’s price). This makes it great for people who need a good video-editing computer that’s also good for multitasking.

Lastly, if you think that maybe you should go a step further and get the M1 Ultra Mac Studio, know that the computing power here would likely be overkill for most users. You’d really need to put this machine through some highly-demanding tasks in order to get the most out of it. We only recommend this computer to professionals who have heavy workflows and need all the computing and graphical power that they could get. The M1 Ultra Mac Studio can handle a lot and, considering its price tag, it’s really only worth getting it if you know that you will be pushing it to its limits in your work. Otherwise, you could save $2000, get the M1 Max Mac Studio, and still get premium performance that should be enough to handle most, if not all, the tasks that you need the computer for.

Of course, in the end, it’s your choice, but the way we see it, the Mac Mini M1 is great for most users who need a dependable, efficient, and still, quite powerful Mac computer that’s also budget-friendly. For nearly all users who need a powerful Mac machine that can handle heavy workloads and still provide great performance, the M1 Max Mac Studio is a great option. Lastly, if you are a professional who knows that their work requires a super-powerful computer that doesn’t slow down even when put through multiple highly-demanding tasks at the same time and if you also have the budget for it, the M1 Ultra Mac Studio will give you everything you need, and more.