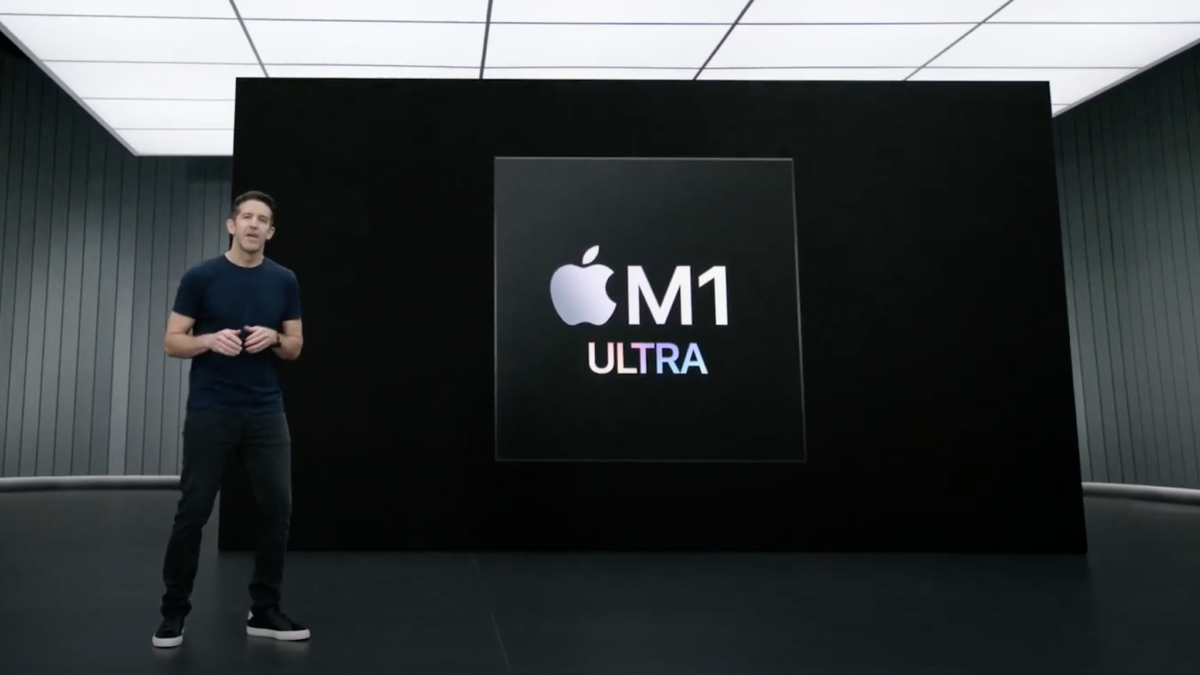 Think the M1 chip is fast? Look at the new Ultra chip

Yesterday, 8 March 2022, Apple held its March 8 Peak Performance event, where it announced the release of several new devices. Among the announced hardware was the M1 Ultra Apple Silicon chip. This is the latest addition to the M1 SoC (system-on-a-chip) line-up, that Apple has been moving towards in the past couple of years.

For those unfamiliar with the M1 chips as a whole, they are the CPUs that power the newest Mac computers, and, as of yesterday, the latest Mac iPads as well. Apple has started moving away from Intel-manufactured CPUs for its computers with the release of its own, home-built M1 processors, and this tendency continues with the release of the M1 Ultra, which coincides with the release of the new Mac Studio desktop – a replacement for the 27-inch iMac that can be equipped with the new Apple Silicon processor. For now, this Apple desktop computer will be the only one that will be powered by the new M1 Ultra chip and that’s only for the high-end configuration of the Mac Studio, which costs $3,999. The entry-level Mac Studio is, instead, powered by the still powerful, but not as powerful, M1 Max chip.

Obviously, $3,999 is not a small amount of money to pay for a desktop computer, which begs the question: Does the M1 Ultra chip make the Mac Studio desktop worthy of its price tag? Let us find out together.

Two M1 chips combined into one

The M1 Ultra is said to make the Mac Studio nearly 4 times more powerful compared to its 27-inc iMac counterpart. A bold statement that makes us wonder what is there exactly that could potentially make this new Apple Silicon chip more powerful. As it turns out, the M1 Ultra chip is basically two M1 Mac chips fused into a single processing unit. You see, at the moment there are four M1 chip variations. There’s the base M1 chip that can be found inside the entry-level MacBook Pro, the Mac Mini, and the MacBook Air. Then there are the M1 Pro and the M1 Max, available respectively in the MacBook Pro 14-inch and the MacBook Pro 16-inch. And finally, you have the newly-released M1 Ultra which, as we said, combines the power of two M1 Max chips.

Fusing together two processing units to make a single much more powerful processor is not a new thing. AMD has done it with some of its Ryzen CPUs and there are also some high-end Windows workstations equipped with Intel Xeon processors that use the same technology. However, having such a processor comes with potential drawbacks and inefficiencies that aren’t always easily dealt with. A major one is that the computer’s firmware and the apps and programs that get installed on it need to be modified in order to use the full potential of the entire processor and not only half of it. After all, there’s no point in having a CPU that combines two other CPUs when the software you use won’t be able to make full use of it. According to Apple, the M1 Ultra solves this, and any other related drawback and inefficiency, using a technology called UltraFusion that allows for lightning-fast data transfer between different parts of the M1 Ultra. Apple has stated that the total bandwidth at which instructions travel within the chip is 2.5 terabytes per second. In addition to taking care of any potential bottlenecks, the UltraFusion technology also ensures that software developers won’t need to make any additional adjustments to their programs and apps, just so that they could fully utilize the M1 Ultra chip, which is something that may be required for other CPUs that have a similar design.

The power behind the M1 Ultra

The M1 Ultra chip impresses with its 20 CPU cores, 16 of which are high performance, while the other 4 are high-efficiency. This is double the number of cores found in both the M1 Max and the M1 Pro, both of which have 10 CPU cores, with 8 of them being high-performance, and 2 – high-efficiency. The doubled number of cores allows for much heavier and CPU-intensive tasks to be performed on the $3,999 Mac Studio. This also means that Mac Studio computers can handle a very big number of tasks at the same time.

Of course, double the computational power means double the price – the M1 Ultra Mac Studio configuration costs twice as much as its entry-level M1 Max-equipped counterpart. Sounds fair considering that the M1 Ultra is basically two M1 Max chips combined into one. In fact, the M1 Ultra isn’t such a big technological leap for Apple. The new chip is certainly impressive with its raw power, but at its core, it’s still a little more than two M1 Max chips fused together. The most impressive thing about the M1 Ultra is actually its implementation of the UltraFusion technology that allows for the chip to be used at its full potential.

Another characteristic of the M1 Ultra that is doubled compared to the M1 Max is the graphics cores of the chip. The Ultra model has 64 graphics cores, while the Max chip has 32. Note, however, that the 64 GPU cores come with the premium M1 Ultra – to get it, you’d have to pay an additional $1,000 on top of the other $3,999 for the base Mac Studio variant (the default M1 Ultra configuration has 48 GPU cores).

According to Apple, with all those extra cores, the M1 Ultra has 1.9 times the computational power of the latest 12th gen Intel Core i9 CPU, when both processing units are running at the same power level of 60-watt. Of course, this is a vague and generalized statement that shouldn’t be taken at face value, yet the fact is that, indeed, the M1 Ultra chip is an impressive processing unit that packs a lot of power, for a price.

Something typical for the Apple Silicon chips that set them apart from more conventional systems is that they have a joined memory – a single memory pool for both the processing and graphical needs of the machine. In conventional systems, the GPU and CPU memory pools are separate, but in M1 chips, that memory is held in the same place which makes accessing it faster.

This is what we see in the M1 Ultra as well, only on a higher level. The base M1 Ultra chip comes with 64 GB of memory – twice the amount of the memory that the base M1 Max chip has. And if you want to get an even more overpowered machine, for an additional $800, you can configure the chip to have 128 GB of memory. It’s hard to imagine what tasks would ever justify needing that much memory on what qualifies as a mid-level desktop workstation, yet the option is there for those who think they may need it. In our opinion, only a handful of people would ever need to get the M1 Ultra version that’s configured to have 128 GB of memory.

What about the heat?

Thus far, everything about the M1 Ultra sounds impressive when talking about the raw potential of this chip. However, having all this power in a rather small package is bound to generate a lot of heat, and good airflow isn’t something that Mac computers are generally known for. Still, according to Apple, the Mac Studio has been designed in a way that would allow for sufficient airflow in order to prevent any overheating and loud fans. Still, with that much power under the hood, it’s hard to imagine that pushing the M1 Ultra to its limits (which should be the overall idea behind buying such an expensive piece of hardware) wouldn’t lead to some pretty loud fan action. That said, we assume that even if the fans go loud, they won’t be that loud, so it should typically not interrupt one’s workflow. We just hope that the cooling and design of the new Mac Studio would allow for the machine to work at full throttle without overheating too quickly.

With the release of the new Mac Studio desktop computer and the supercharged M1 Ultra chip, Apple is showing that it’s not done with the desktop market and that it is determined to keep pushing the limits of what its Apple Silicon chips can do. The M1 Ultra is a beast of a system and should make quick work of even the most resource-intensive tasks, and satisfy even the most demanding power users, even if it causes some heat within the Mac Studio’s chassis. You just need to be ready to shell out for this machine because, any way you look at it, it’s an expensive piece of hardware.

How to play NARAKA: BLADEPOINT on MAC