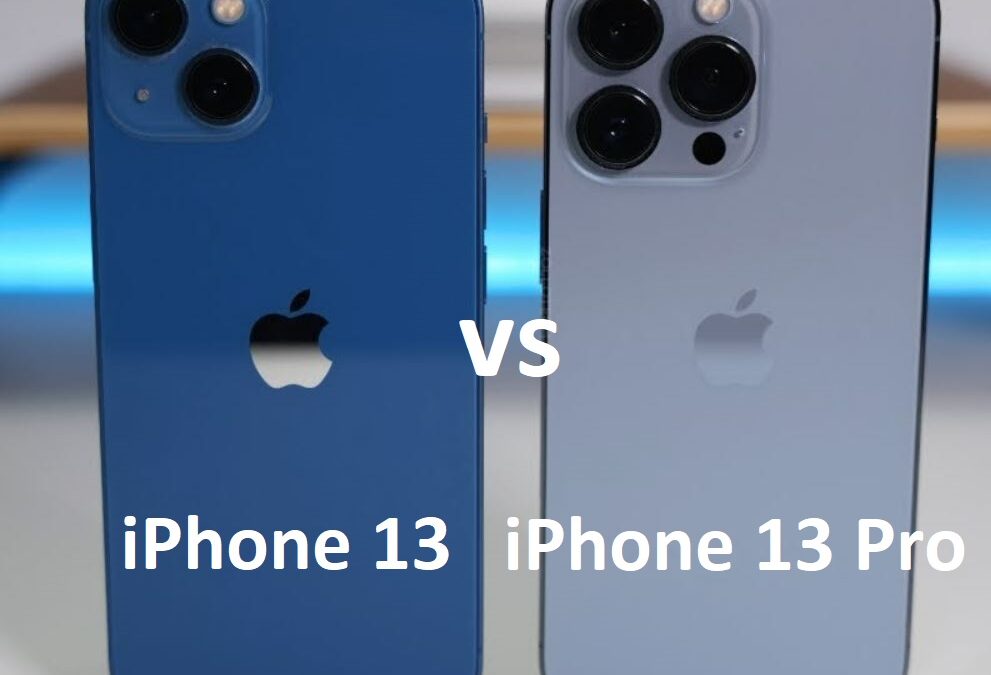 In 2021, Apple released the latest additions to their iPhone and iPhone Pro product lines. The two new devices, the iPhone 13 and 13 Pro bring a good number of improvements over their 12 and 12 Pro counterparts. Among those improvements are a better back and more feature-packed cameras, the faster A15 Bionic chip, a longer-lasting battery, a slightly smaller notch, and more.

Currently, the standard iPhone 13 has a starting price of $799 whereas the price tag for the iPhone 13 Pro begins at $999. The two devices are quite similar to one another, and there are in fact very few differences between them. This may make users wonder if there’s any point in going with the $200 more expensive 13 Pro option, considering the standard iPhone 13 already has most of the features that are included in the higher-end model.

The two devices are visually nearly identical. They both have the trademark iPhone design with metallic casing and squared-off edges and have the exact same dimensions of 5.78 inches/146.7 mm (height), 2.82 inches/71.5 mm (width), and 0.30 inches/7.65 mm (depth). However, despite the same sizes, the iPhone 13 Pro is slightly (30 grams) heavier because its casing is made of stainless steel in contrast to the aluminum casing of the iPhone 13.

One more notable difference in the designs of the two devices is their color options – the iPhone 13 can be in Blue, Pink, Starlight, Midnight, and PRODUCT(RED), while the 13 Pro comes in Silver, Gold, Sierra Blue, and Graphite.

Overall, when talking about how each of the devices looks, it’s mostly about personal preference to pick one over the other. Regardless of which of the two sets of color options and the two types of casing material you prefer, we believe that this shouldn’t be the main deciding factor when choosing which of the two iPhones to get.

A more noteworthy difference between the iPhone 13 and 13 Pro is that the latter features a ProMotion display that has an adaptive refresh rate that ranges between 10 Hz and 120 Hz. The changes in the refresh rate are based on what’s currently shown on the device’s screen. For example, when what’s shown on the screen is static – such as an article you are reading – the refresh rate will remain low, but if you are playing a game or watching a video, the refresh rate can go up to 120 Hz. This should, in turn, result in a smoother experience for the user and also make the display more responsive. That said, such a feature is not particularly essential and most users, especially ones that don’t play a lot of games on their smartphone, wouldn’t notice the difference. The refresh rate of the iPhone 13 stays at a fixed 60 Hz, which is more than enough for a satisfyingly- smooth experience.

One of the more significant differences between the two iPhone models comes from their rear camera setups. The iPhone 13 features a dual rear-facing camera with Wide ƒ/1.6 and Ultra Wide ƒ/2 lenses, both of which capture photos and videos with 12 MP. The iPhone 13 Pro has a triple rear camera – in addition to the 12 MP Wide ƒ/1.5 and Ultra Wide ƒ/1.8 lenses of the iPhone 13, the Pro model also adds a Telephoto lens that has an optical zoom of up to 3 times and can also digitally zoom 10 times further than the camera of the iPhone 13.

Additionally, each of the three lenses of the 13 Pro model has a larger aperture, which allows for more light to be let in, enabling the device to take better photos in low-light environments.

Furthermore, the back cameras of the Pro model can take Apple ProRaw photos and record 4K ProRes videos with 30 FPS – both of these file formats can take full advantage of the improvements brought to the rear camera setup of the iPhone 13 Pro.

Also, the iPhone 13 Pro’s back camera features a LiDAR scanner that allows it to accurately map the environmental depth. The result is that the AR experiences are enhanced, and also the user can take portrait photos with Night Mode.

The camera improvements mentioned thus far are more likely to be appreciated by professional photographers that may need a high-end camera in their smartphone. Regular users may not necessarily need this level of rear camera features. The majority of the camera improvements will probably not be needed by most people on a regular basis, or maybe even not ever. On the other hand, if you are a professional or passionate recreational photographer or videographer, you will probably appreciate the array of advanced features packed into the iPhone 13 Pro’s back camera.

Lastly, before we move on to the next paragraph, we must say a couple of words about the front cameras of the two devices. The two devices feature the exact same TrueDepth 12MP ƒ/2.2 front camera that supports features such as Portrait mode, Portrait Lighting, Night Mode, Deep Fusion, Photographic styles, and more. The only two differences are that the iPhone 13 Pro front camera, similar to the three cameras on the back, can take photos in the Apple ProRaw format and also that it can record 4K/30 FPS ProRes videos.

The A15 Bionic chip

The two devices feature the same A15 Bionic chip, which is the latest Apple chip developed for iPhones and other mobile devices. The A15 chip offers some slight to moderate improvements in its performance when compared to the year older A14 chip, featured in previous iPhones.

Though the chip model is the same across both devices, the one included in the iPhone 13 Pro has an additional CPU core, which makes the device perform slightly better than the standard iPhone 13. Additionally, the A15 in the 13 Pro iPhone model comes with 2 GB more memory compared to the iPhone 13, further enhancing the performance of the device. In practice, depending on how the devices are used, users may not notice any significant difference in the performance. People who are more likely to prefer the higher-performance iPhone 13 Pro are ones who tend to play demanding mobile games, use video-editing software, or tend to have a lot of apps and browser tabs open at the same time on their smartphones. However, even then, the A15 chip features in the iPhone 13 should perform just fine – it’s still a very good mobile chip that offers fast performance, so it’s doubtful that many users would truly need the more powerful option.

There is a moderate difference in the battery lives of the two devices – the iPhone 13 can provide up to 19 hours of video playback, up to 15 hours of video streaming, and around 75 hours of audio playback. The battery of the iPhone 13 Pro can last for 22, 20, and 75 hours respectively. Though the difference isn’t large, it’s still noteworthy and if you’ve always wanted to have longer battery life on your smartphone, then maybe it’s worth considering the more expensive iPhone 13 Pro model.

Both devices have the same base storage configuration of 128 GB of storage space. Also, both of them can be configured to have 256 GB and 512 GB. However, the iPhone 13 Pro also has a 1 TB option, which isn’t available for the standard iPhone 13.

For the majority of users, the 128 GB and the 256 GB storage configurations should be more than enough. If you want even more space, you could also go for the 512 GB configuration, which is still available for both iPhones. It’s doubtful that many users would truly need the 1 TB variant of the iPhone 13 Pro. This option is likely mainly aimed at professionals who need a lot of space that could fit large libraries of Apple ProRaw photos, ProRes 4K videos, and other HD image and/or video files that require lots of storage. Of course, if you are a regular user, but are prone to easily fill up the drives of your devices with apps, media files, and other data, you can always go for the 1 TB iPhone 13 Pro, but know that this version of the device has a price tag of $1,499. In comparison, the 512 GB storage configuration of the iPhone 13 costs $1,099.

Aside from the iPhone 13 Pro Max, the iPhone 13 and 13 Pro are the best smartphones that Apple has to offer at the current moment. Both devices have top-tier cameras, large displays, fast and highly efficient chips, a ton of helpful features, and a comfortable amount of storage space even with their base storage configurations. However, the higher-priced iPhone 13 Pro features some undeniable advantages compared to the standard iPhone 13 option. It has a significantly improved camera, fit for both recreational and professional photographers and videographers, has a moderately faster A15 Bionic chip, and a moderately longer battery life. It also comes with a stainless steel casing, which may be preferable to some users, compared to the aerospace-grade aluminum casing of the iPhone 13.

All that said, we do not consider the iPhone 13 Pro to be a necessary upgrade for most users over the iPhone 13. However, if you like and want the specific improvements that come with the 13 Pro model, the extra $200 in the price tag would be well worth it.