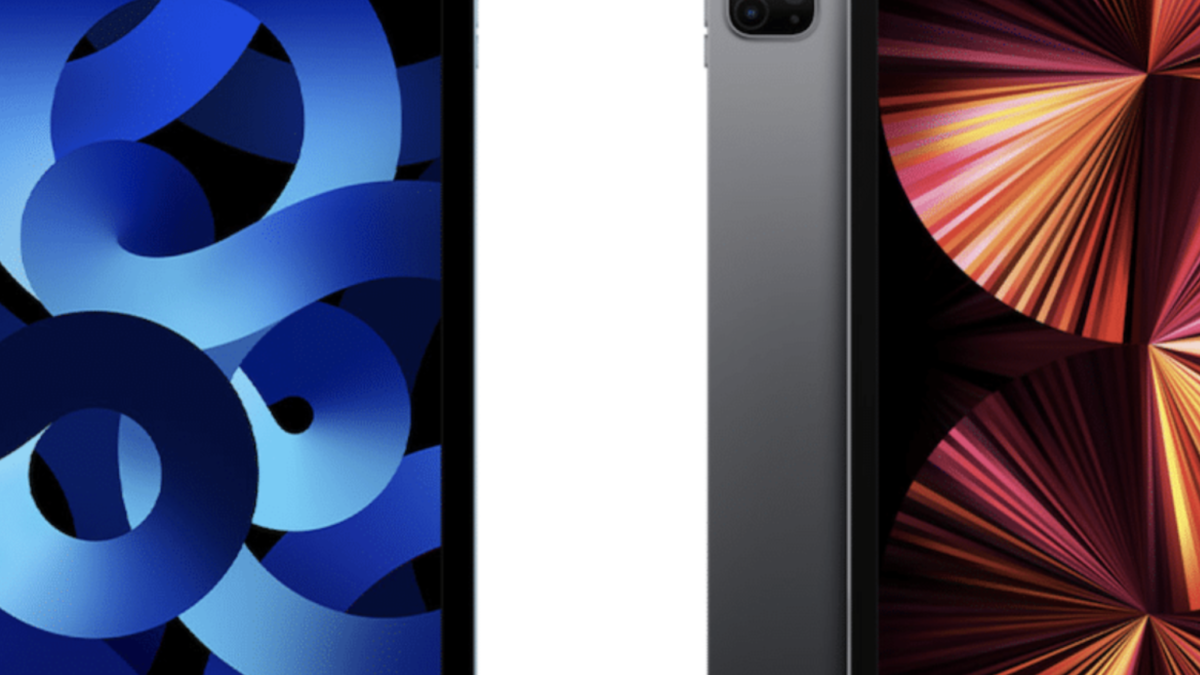 Apple recently announced the release of its latest iPad Air model, which is powered by an M1 chip, supports 5G connectivity and comes with a front-facing camera. The addition of the M1 chip to the latest iPad Air brings the device close in terms of features to the higher-end iPad Pro 2021, which is also powered by an M1 chip. The two devices – the 2022 iPad Air and the 2021 iPad Pro share a lot of similarities, but ultimately they are still quite different from one another, and they are also targeted at different groups of users. If you are thinking about getting a new iPad but aren’t sure which of these two would be a better fit for you, then be sure to read the following lines, where we will compare the two iPad models and try to help you make an informed decision.

Both iPad models look very similar – both have an aluminum encasement with squared-off edges, and both have a thickness of 0.24 inches or 6.1 mm. The iPad Pro comes in two sizes – 11-inch and 12.9-inch. The iPad Air screen size is 10.9 inches, making it almost identical in size to the 11-inch iPad Pro. The iPad Air also has thicker bezels, resulting in a noticeably smaller display compared to the 11-inch iPad Pro.

The iPad Air has more color options compared to the two iPad Pro variants. You can get the iPad Air in Starlight, Pink, Space Gray, Blue, and Purple. The iPad Pro models are only available in Space Gray and Silver.

A more notable difference between the two devices is how they get unlocked. To unlock the iPad Air, you need to authenticate yourself using its Touch ID sensor that’s in the top button. On the other hand, the iPad Pro uses Face ID authentication through its front-facing camera.

Both authentication options have been around for quite a while, so the technology for both of them is highly refined, so it shouldn’t matter a lot which one you get to use. Still, if you prefer one over the other, this may shift your preference toward either the iPad Air or the iPad Pro. However, we believe that there are more important differences between the two devices, so, in our opinion, the authentication method shouldn’t play a particularly major role when deciding between the two device options.

As mentioned earlier, the iPad Pro has two display options – 11-inch and 12.9-inch. While the 11-inch variant is comparable to the slightly smaller 10.9-inch iPad Air, the differences between the iPad Air and the 12.9-inch iPad Pro are quite notable. The latter is actually a quite large tablet and, therefore, lacks the same level of portability as the smaller iPad Pro or the iPad Air. The 12.9-inch iPad Pro is best used as a laptop substitute, whereas the other two devices are better for working on the go.

Another important difference in the displays of the iPod Pro and iPod Air is the technology that’s used in them. Both devices have 264 PPI Liquid Retina LED displays with full lamination, an anti-reflective and oleophobic coating, True Tone, and P3 Wide Color. The only difference between the 11-inch iPad Pro and the iPad Air is that the iPad Pro’s display is 100 nits brighter and employs the ProMotion technology that allows for better display refresh rates (up to 120Hz).

However, the display of the 12.9-inch iPad Pro has one other significant advantage – it uses the so-called Mini-LED technology. This allows the display to reach up to 1,600 nits of peak brightness and gives it a contrast ratio of 1 million-to-1. The higher brightness and contrast means that the display can make use of HDR and show true-to-life images, where even the brightest or darkest details are accurately displayed. This, in turn, makes the 12.9-inch iPad Pro a great choice for professionals who work in the fields of photography, filmmaking, and video editing. On the flip side, if you aren’t professionally involved in any sort of video or photo-editing and/or don’t need a tablet tailored towards such users, you may find that the display of the 11-inch iPad Pro or that of the iPad Air is perfectly sufficient and there’s no need to pay extra money only to get a better display you are not likely to ever need.

Obviously, even though the iPad Air and the iPad Pro both feature the same M1 chip and support 5G, there are also some notable differences between the hardware of the two devices.

In contrast to that, with the iPad Pro, you can pick between an 8 or a 16 GB memory configuration. You can also go from 128 GB storage, with the vanilla variant of the device, all the way up to 2 TB.

Since we are talking about tablets here, the option to get 16 GB memory and significantly larger storage on the iPad Pro is, in our opinion, not as significant as a similar difference would be if we were talking about laptops or desktops instead. The thing about Mac tablets is that the iPadOS that they use is great at using memory in a highly efficient way. In other words, 8 GB should be more than enough for the majority of users. You may end up needing 16 GB if you tend to do a lot of multitasking and have a lot of different apps, with a lot of windows of the same app open at the same time. In such instances, the option to go beyond 8 GB with the iPad Pro becomes more important. On the other hand, if you think that 8 GB memory is enough for you, then the iPad Air automatically becomes preferable, due to its $200 cheaper price.

As far as storage is concerned, here it all comes down to whether you’d like to use your iPad as a device where you’d store a lot of data, or if you’d only keep the bare minimum of data on the iPad. If you don’t need a lot of storage, the iPad Air is, once again, the better option due to its price tag.

Depending on how much you intend to use the cameras of your new iPad and what you’d like to use them for, the differences here may be quite important to you.

Both of the devices have rear ƒ/1.8 12MP Wide cameras. However, the iPad Pro also features a ƒ/2.4 10MP Ultra-Wide camera as well as a LiDAR scanner. The ƒ/2.4 10MP camera of the iPad Pro is able to zoom up to 5 times and zoom out up to 2 times due to its Ultra-Wide lens. Additionally, the iPad Pro’s back camera features an extended dynamic range for video recording that goes up to 30 FPS. The camera also has a True Tone flash.

The LiDAR scanner of the iPad Pro allows the device to measure the distance to objects that are up to five meters away. Thanks to this feature, the iPad Pro offers an improved AR experience with a better understanding of the environment, better motion capture, as well as people occlusion.

All these advantages of the back camera of the iPad Pro make it a potent tool for professional photographers who could use it as a viewfinder device for their photos. However, most regular users, especially those who rarely use the back camera of tablets, would likely not need this level of advanced camera features in their iPad.

The front-facing cameras of the two devices are both ƒ/2.4 12MP Ultra Wide cameras that have 2 times optical zoom out. The front camera of the iPad Pro also features a Portrait mode, Portrait Lighting, Memoji, and Animoji.

The front cameras of both devices have the Center Stage function, which employs the machine-learning capabilities of the M1 chip to keep the speakers in video calls centered in the frame. If users move during a video call, the Center Stage feature will automatically pan the camera to keep whoever is speaking within the shot. If additional users join the call, Center Stage will detect them and zoom out to fit them into the shot if possible.

In other words, the front cameras of the two devices are nearly identical, save for a couple of not overly important extra features that the iPad Pro’s camera has.

The iPad Pro’s mic is marketed as being of “studio quality” and it’s also able to record stereo audio. If you often need to use your tablet for recording audio (such as lectures in crowded halls or music records), the iPad Pro may be the preferable variant. That said, the iPad Air still has a very proficient microphone that should satisfy the majority of users.

As for the device’s speakers, the iPad Air has a two-speaker setup, whereas the iPad Pro has four speakers. In practice, the difference isn’t huge – we’d say that only users who tend to watch lots of videos/TV/films or listen to a lot of music on their iPads would care about this difference, but even then it’s debatable whether that would be worth the extra $200 in the iPad Pro’s price tag.

In our opinion, the vast majority of users would be more than satisfied by the new, M1-powered iPad Air. It offers the same performance as the 8 GB memory iPad Pro configuration and also offers a lot of the same features. Of course, there are some notable differences in certain aspects between the two devices – the iPad Pro has a notably better back camera, the display of its 12.9-inch variant offers significantly better picture quality with HDR support, there is a Thunderbolt 4 port, and you can get up to 2 TB of storage with this device. However, most of those advantages would probably not be as important to a regular user, which is why it would make more sense to get the iPad Pro if you are a professional in a certain area, and you need some of those improved features in your work. In all other cases, we’d say that the cheaper iPad Air, yet still impressive iPad Air is the better option.