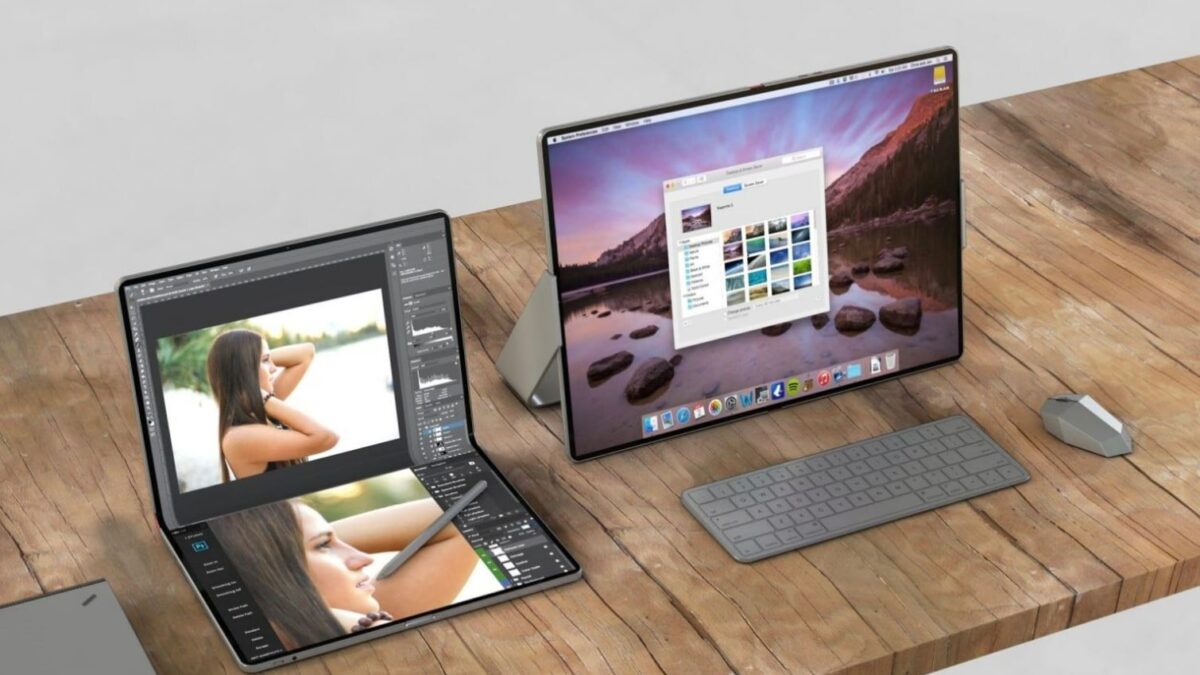 A Foldable MacBook – What we know so far

According to a recent report by Ross Young, a Display Supply Chain Consultants analyst, there’s a chance that Apple may be working on developing large foldable displays for an all-screen foldable MacBook with a touch display. It’s hypothesized that the new MacBook would combine the functions of two types of devices: when folded, it would operate as a regular laptop, but once unfolded, it could work as a monitor together with an external keyboard and mouse or trackpad.

Due to the hypothesized all-screen design of the new MacBook, if such a device ever gets released, it wouldn’t have a conventional tactile keyboard and trackpad, but would rather have those integrated into the touch screen itself. This would, in turn, introduce the problem of making typing on such a MacBook much slower and considerably less comfortable. Ross Young has speculated that Apple would likely implement haptic feedback into its touch keyboard to give users a sense of pressing a key. However, admittedly, this could still not replace the actual feeling of typing on a tactile keyboard and would still likely greatly reduce the typing speed and comfort.

A lot of users and experts doubt that Apple would ever release such a MacBook considering the company’s refusal to integrate a touch-screen into its regular MacBook models. According to a statement made by former Apple design chief Sir Jony Ive, adding a touch screen to a MacBook wouldn’t be appropriate considering how heavily optimized macOS is to work with indirect input (e.g. a trackpad, a mouse, a physical keyboard). Additionally, back in 2020, Apple engineering chief Craig Federighi stated that adding a touch screen to MacBook models would needlessly introduce ergonomic problems such as having to lift your arm up to touch the screen of the device instead of keeping your hands rested on the laptop’s keyboard. According to Fereidghi, this has always been something that Apple has been trying to avoid, which is why a touch-screen MacBook seems to be out of the question. This, in turn, seems to remove any possibility of an all-screen MacBook with a touch screen to be ever released.

An elongated screen that folds at the hinge

Another potential future MacBook design that has been speculated by Ross Young is that Apple may instead be working on a more conventional MacBook design, where the tactile keyboard and trackpad are kept, but the display of the device extends beyond the fold and enters its lower half, where the keyboard is located. In other words, the display of such a MacBook design would gain a bit more space without sacrificing the conventional keyboard and trackpad. In a way, this could be seen as a way of reviving the controversial touch bar feature, only this time it would be part of the device’s screen. In our opinion, this design seems even less likely, seeing as introducing a foldable screen to a MacBook only to gain a very small among of extra screen space would introduce much more complications to the device’s design than the benefits that may come from it.

If Apple ever decides to release an all-screen touch display MacBook, that would most likely not happen for at least another four or five years, according to Ross Young. Although foldable screen technology isn’t something new, it’s still needing to go a long way until it gets properly implemented into high-end, high-quality devices such as MacBooks or other Apple products.

"Your iPhone has been hacked" Fix