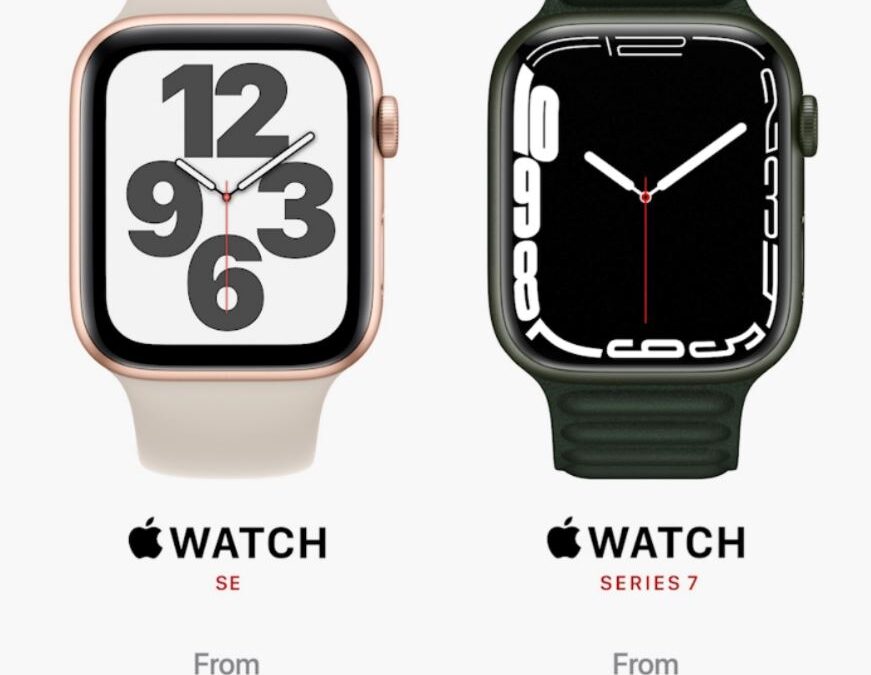 At first glance, the two devices share a very similar look – they both have a rectangular shape with rounded edges. The Apple Watch SE has only one case material option – aluminum – whereas the Apple Watch Series 7, in addition to an aluminum casing, also has a stainless steel and a titanium options.

Due to its larger case, the Apple Watch Series 7 is a bit heavier than the SE model. If you upgrade from the aluminum Apple Watch SE to a stainless steel Apple Watch 7, that weight difference would be more notable, though we doubt that anyone would take issue with that.

In terms of finish options, both devices come in several of colors – the Apple Watch SE is offered in Silver, Gold, and Space Gray. The Apple Watch Series has Silver, Green, Blue, Midnight, Starlight, Gold, Graphite, Space Black, and Titanium as its color options.

A notable improvement that comes with the Series 7 Apple Watch model is that it features a front crystal that’s over 50% thicker compared to that of the older Apple Series 6 model. This, combined with its more rounded shape, makes the front crystal of the device significantly tougher and gives it improved crack-resistance. Overall, if impact-resistance is something that you care about, then the Apple Watch Series 7 is certainly the better option.

Additionally, the Series 7 model has IPX6 dust-resistance, which should make it much less likely for the device to get any dust stuck in it if you wear it on the beach or in the desert.

As for their water-resistance, both devices have a rating of 50 meters under ISO standard 22810:2010. According to Apple, this means that the devices can be used for shallow-water activities, such as swimming in a pool or in the ocean. However, they shouldn’t be worn during activities, such as SCUBA-diving or waterskiing, that would expose them to high-pressure or high-velocity water. This rating does not meat that either device can be submerged in 50-meter deep water. Submerging an Apple Watch SE/Series 7 in any depth of water beyond shallow water could and likely will result in water damage to the device. The takeaway here is that both devices have an equal water resistance, so neither has an advantage in this aspect.

Still, overall, though the Apple Watch SE is still a relatively durable device, the Apple Watch Series 7 is the tougher option due to its crack-resistant display and its IPX6 dust-resistance. It is up to you to decide how important of a factor this is when deciding between the two devices.

Additionally, the Apple Watch Series 7 comes with two new watch faces – one of them shows an animated dial that highlights the current hour by enlarging its number to make it more visible. The other face splits the screen in half, with each half showing a different type of data – for instance, one half can be customized to show the current time and the other to show what’s the weather at the moment.

Both devices feature the same Retina LTPO OLED technology in their displays, and they have the same peak screen brightness of 1,000 nits. However, the Apple Watch Series 7 display uses an always-on mode that keeps the display bright even when your wrist is lowered. This means that you don’t have to correctly lift your wrist to wake up the device’s display every time you want to look at the clock. Additionally, this also lets you perform actions such as accessing the Control Center or the Notifications Center, change the watch faces, or tap on complications without needing to wake the watch’s screen.

All on all, the main advantage of the Apple Watch 7 here is the larger screen space. If you feel like you’d feel better with having a smartwatch that provides you with a larger display and can fit more content, then maybe the Series 7 model would better fit your preferences. However, if this isn’t something that you care about too much, you should be perfectly satisfied with the Apple Watch SE, which comes at a much lower price.

Despite the moderately faster performance of the S7 chip compared to the S5 chip, you are unlikely to notice a particularly significant practical difference between how the Apple Watch Series 7 and the Apple Watch SE perform. Since we are talking about smartwatches that are typically not supposed to perform any particularly resource-intensive tasks, the  real-life benefits from the 20% faster CPU of the S7 chip would be minimal in most cases and for most users. The S5 chip is still very fast and should provide you with a more than adequate performance. Therefore, in our opinion, getting the Apple Watch 7 solely because of its lightly better chip is not worth it.

Both devices feature the same 18-hour “all-day” battery life, so if you are looking for a longer battery life, you won’t get it with the Apple Watch Series 7. On the other hand, the latter device has a notably reduced charging time. The Series 7 model gets charged up to 33% faster than the Apple Watch SE. We doubt that this difference would be the main deciding factor for the majority of users, but it’s still something to bear in mind when deciding which of the two devices to get.

The U1 Ultra-Wideband chip in the Apple Watch 7

Of the two devices, only the higher-end Series 7 model comes with the new Ultra-Wideband chip. This chip allows the Apple Watch Series 7 to make use of short-range wireless location, thus enabling it to support be used for tracking AirTags or be used as next-generation digital car keys.

According to Apple, this chip enables the device to provide a highly precise measurement (more precise than Wi-Fi or Bluetooth) between its location and the location of an AirTag by calculating the time it takes for the radio wave it emits to travel to and back from the other device.

Though this is certainly an interesting feature that we expect would have a wider use in the near future, at the current moment, the potential uses for the U1 Ultra-Wideband chip are quite limited, so we do not expect many users to need it in their day-to-day. However, if you intend to keep your Apple Watch for at least a couple of years before you upgrade to a different smartwatch, then it may be worth getting the Series 7 as it’s the more future-proof option due to features such as the U1 Ultra-Wideband chip. Also, if you already know that you would make good use of that chip (for instance, you are already using AirTags and would like to be able to track them with your new smartwatch), then it may be well worth getting the more expensive Series 7 model.

First, the Series 7 model features a blood oxygen sensor on its back that emits light at your skin and then measures what light gets reflected by the red blood cells beneath your skin. Using the readings received by the sensor and a complex custom algorithm, the Apple Watch can determine how much oxygen is being carried by your red blood cells, which can give you an important insight relating to your wellbeing.

Additionally, the Series 7 also features an electrical heart sensor that can measure your heart rate and rhythm with very high accuracy.

The Apple Watch SE doesn’t have the blood oxygen sensor, and it uses an optical heart sensor and not an electrical one, like the sensor features in the Series 7. The Apple Watch SE can still provide you with important data such as your current heart rate and, like the Apple Watch Series 7, it too can detect instances of irregular heart rhythm.

Both devices can also send out emergency SOS, have a fall-detection feature, and offer noise monitoring.

If you care about having advanced health-monitoring features in your new smartwatch, then the blood oxygen sensor in the Apple Watch Series 7 makes this device a desirable option. However, most of the other health-related features are included in the two devices, which is something to keep in mind.

The Apple Watch Series 7 is a more modern, durable, and feature-packed device that is a good option for someone who intends to use the device for at least a couple of years into the future, cares about its larger display, faster charging, and health-monitoring features. That said, the Apple Watch SE still offers a lot of the same things that come with the SE model, but at a notably lower price. If you do not need or care too much about the difference in the display sizes, the advanced health-monitoring features, or the reduced charging time, the Apple Watch SE may be the better option for you as it’s still a very good smartwatch, that’s also much more budget-friendly.