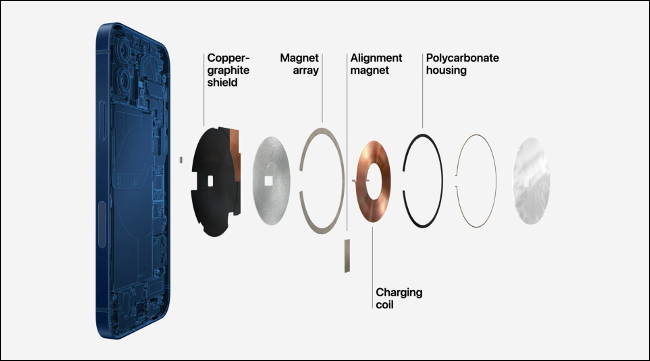 The new iPhone 12 set to be officially released on 23d of October will focus on several new and interesting features that aren’t present in previous iPhones. The implementation of 5G is one of those features but this is hardly a surprise to anyone seeing as how 5G connection is set to become the standard for new smartphones.

On the other hand, the inclusion of the MagSafe feature is a more curious modification of the iPhone 12 lineup as it opens a wide range of possibilities for how people would be able to use their new iPhone devices. In this post, we will tell you more about the MagSafe feature and we will go over some of the gadgets that you would be able to attach to an iPhone 12 with its help.

One example of how MagSafe could be used is with MagSafe chargers that let you charge your phone by “sticking” the charger to the back of the device. Thanks to the MagSafe technology, the charger would remain attached to the phone during the charging process. Of course, iPhone 12 devices would still have their regular USB Type-C port so you could charge them using a regular charger but the MagSafe feature would now offer an alternative to that.

Charging your phone using MagSafe is, in my opinion, one of the more boring ways you could use this new feature. With its addition to the iPhone 12 lineup, a whole ecosystem of new gadgets and attachments that you could snap onto the device would become available for those interested.

This should go without saying but MagSafe will only be available with iPhone 12 and iPhone 11 and older iPhone lineups will not be compatible with MagSafe accessories.

Currently, there isn’t a huge variety of accessories that support the MagSafe feature but their number is certainly going to increase over time as more and more people start using the new iphone smartphones. At the moment, Apple offers three MagSafe-compatible options – the MagSafe charger we already mentioned, a variety of MagSafe cases, and a MagSafe wallet.

We already briefly mentioned what this charger is all about. It basically allows for faster and more secure wireless-charging by implementing the MagSafe technology. All you’d need to do is place the iPhone 12 on the platform at the end of the charger with the back of the device facing the platform and the magnets will secure the phone into place so that the charger platform stays attached to the device while the latter is being charged.

An obvious question regarding the MagSafe charger is whether it would be shipped together with the iPhone 12, within the same box. Unfortunately, users who are interested in trying out the MagSafe charger would have to purchase it separately. The iPhone 12 box would only contain the regular USB Type-C charger and no power adapter or EarPods, which must also be bought separately.

The price of Apple’s wireless MagSafe charger is $39.00 from Apple’s official site.

Apples combo Watch-iPhone charger, called the MagSafe Duo Charger. Both will support 15W of power. Samsung for instance is already working on a triple charger that can simultaneously charge your phone, earbuds and watch.

The official date is let to be announced. We believe somewhere around December it should launch,

On Apple’s site, there is a wide selection of different MagSafe-compatible cases that use the technology of this new feature to securely attach themselves to the smartphone and to also allow wireless charging with the MagSafe charger without the need to remove the case.

Most of the design options available are minimalist, offering a single color finish with different color options. There are a couple case designs that add a stylish power button image and there are also three cases that have a multi-color finish that reminds of an artist’s drawing for those who prefer a more artistic-looking case.

All different case designs come at the same price of $49.95 but, at the moment of writing, not all of them are available for pre-orders.

The third accessory offered by Apple which supports the MagSafe technology is a small leather wallet that can be securely attached to the back of the device and kept there indefinitely. The MagSafe magnets ensure that the wallet wouldn’t fall off the smartphone no matter what. The design of the wallet itself is simplistic and minimalist, with only a small Apple logo etched on it. The small size of the wallet does mean that you cannot put lots of stuff into it and for most people it would probably not be enough to replace an actual wallet but it is perfect for storing credit or debit cards in an easily-accessible place.

The price of the leather MagSafe wallet is $59.00 from Apple’s online shop and it can be used in combination with a MagSafe case. According to Apple, the wallet is shielded so that it can safely be used with credit/debit cards with no danger of the cards getting demagnetized from the wallet’s magnets.

Here are some third-party options for MagSafe accessories that are available outside of Apple’s online shop.

OtterBox offers three different types of MagSafe cases – the Figura Series, the Aneu Series and the Symmetry Series Plus.

The Symmetry Series Plus are a bit more expensive and come at the price of $59.95. According to OtterBox, those cases have an additive to their finish that is silver-based and has an anti-microbial growth effect. This case series also has a drop protection that, according to its creators, exceeds the military standard by three times.

All of the OtterBox MagSafe case options are compatible with the upcoming iPhone 12 models and should work in the same way as their official Apple counterparts.

Belkin offers a slick-looking 3-in-1 wireless charger that supports the MagSafe technology. The charger works with iPhone 12 and iPhone 12 Pro as well as with Apple Watch and AirPods and has three separate charging platforms so that you can charge two devices at once. It also provides up to 15W energy transfer for faster charging and shorter charging times.

The charger is, however, a bit pricey, costing $149.99 at Belkin’s online shop. However, if you have the other mentioned Apple devices and need a quick way to charge them at home, the Belkin 3-in-1 charger seems like a good option. Note, though, that it isn’t the most portable charger available due to its rather bulky design so it is still important to have a regular charger for when you need to charge your iPhone 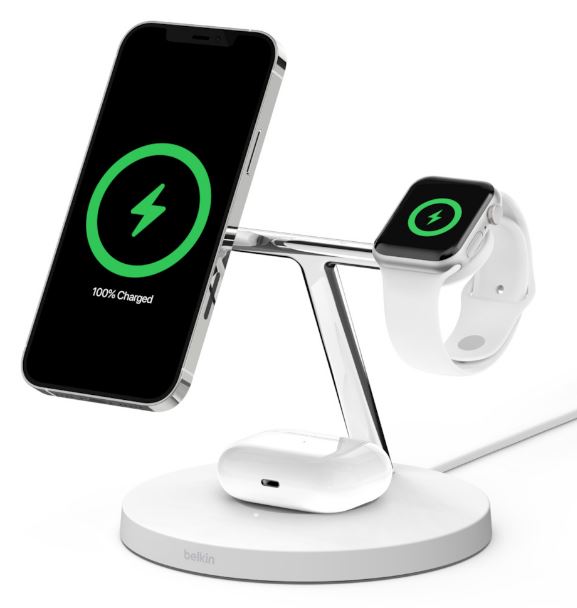 when on the road.

Belkin also offers a car-mount that implements the MagSafe technology. Instead of using a regular clip to keep your phone in place, the MagSafe implementation allows your phone to stay securely attached to the car-mount even when driving through bumpy roads. Also, the lack of conventional clips means that you can freely rotate the smartphone on the mount and place it both vertically or horizontally.

The Belkin MagSafe car-mount is available at the company’s online shop and is priced at $39.99.

PopSockets has confirmed that they have grip accessories for iPhone 12 that will make use of the new MagSafe feature, allowing the accessory to be attached to the device with the help of the built-in magnets. At the moment of writing, such accessories are still not available to the public but it seems that it’s only a matter of time before you could purchase them from the PopSockets site.

OtterBox is a large manufacturer of accessories for smartphones and tablets and in addition to their MagSafe iPhone 12 case series, they also offer a wide variety of other products that you can buy for different iPhone models. On their site, in addition to iPhone cases, you can also find screen protectors, chargers, power banks, and even UV smartphone sanitizers that supposedly cleans your phone from germs using UV light.

One iPhone product from Otterbox that may interest some of you is the iPhone 12 and iPhone 12 Pro Defender Series Case. It doesn’t use the MagSafe technology but it still seems like a solid and robust iPhone 12 case that can keep your device well protected. According to OtterBox, it’s multi-layered provides drop protection that is four times stronger than what the military standard is. Also, even though the iPhone Defender Case doesn’t employ the MagSafe technology, it still allows for wireless charging so you can freely use your MagSafe charger without the need to remove the Defender case.

On paper, what OtterBox has to offer sounds good but what did the users think?

Unfortunately, it seems that there are a lot of customers who are dissatisfied either by the products themselves or by the customer service that OtterBox provides.

For example, the majority of reviews on Trustpilot about OtterBox have rated the latter with one star (out of five) and would not recommend purchasing products from OtterBox. Common complaints are that the protective accessories offered by the company fail to provide adequate protection for the users’ devices or that the customer service of OtterBox is bad and unhelpful.

Some customers claim that the products offered by OtterBox are overpriced and don’t provide the quality that should be expected for their price. I, personally, cannot comment on that matter and it is everybody’s own right to form their opinion on the matter but considering the overabundance of bad reviews, you should at least be considerate and look around for different options before deciding whether to get something from OtterBox or not.

The addition of the MagSafe feature will certainly add lots of new interesting and helpful ways you could use your iPhone device and it is a fresh new change that many users will appreciate. Currently, there are only a few options for MagSafe-compatible accessories but I am certain that we will start to see more in the near future as the number of users with iPhone 12 starts to increase.