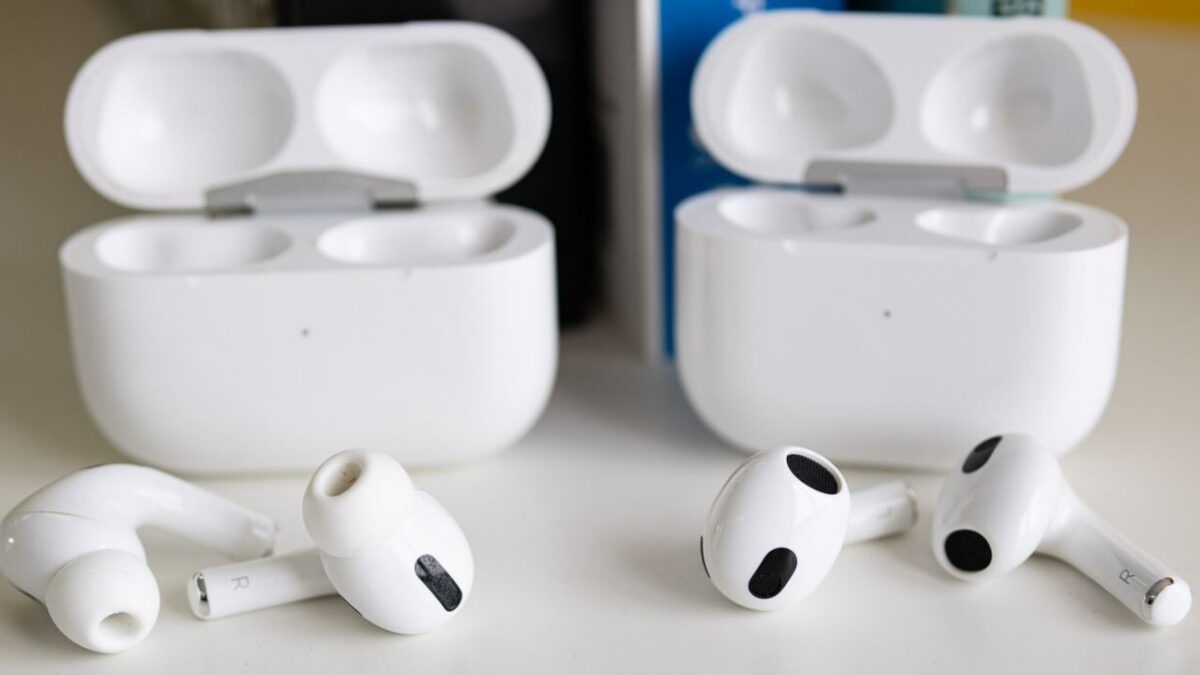 Not a month, during Apple’s March 8 Peek Performance event, the company announced a number of new products, including the latest AirPods – AirPods 3 – that come with a number of notable improvements, such as Adaptive EQ, sweat and water resistance, spatial audio, MagSafe charging, and force sensor controls, among others.

With all the improvements added to the entry-level AirPods, one might wonder if it would make sense to pick them over the high-end AirPods Pro, especially considering that the latter is $70 more expensive.

In the next lines, we will attempt to answer this question by comparing the two products, highlighting their advantages and disadvantages, and sharing with you our opinion on which model we believe to offer the better value.

As has always been the case, there is a rather significant difference between the design of the two types of earbuds. The AirPods 3 retain their standard design of more conventional earbuds that are simply hooked into the ear, rather than having a silicon tip that gets sealed into the ear canal, providing both better audio thanks to improved noise-cancellation, but also makes the earbuds a lot more stable and less likely to fall out of one’s ears. For many users, this simple difference may be the deciding factor when choosing between the two variants. In fact, when getting new earbuds, their design type (with or without silicon tips) should always be the main consideration point. Here is a quick rundown of the pros and cons of each option.

With silicon tips that go into the ear canal

Even though the design of the AirPods Pro seems the superior option, we cannot objectively say which option is better – here, it’s all about personal preference. However, you should most definitely pay special attention to the design of the two AirPods models and decide which one would be better for you. For example, if you get the AirPods 3 and realize that they keep falling off or if you get the AirPods Pro and you cannot tolerate the feeling of having their silicon tips in your ear canals, none of the other qualities of the earbuds would matter to you.

Before we go any further, we need to highlight the ANC (Active Noise Cancellation) technology used in the AirPods Pro. Unlike other earbuds with a similar design that only feature passive noise cancellation, the ANC technology of the AirPods Pro lets them greatly reduce the noise coming from the user’s environment, but also gives the option to turn off the noise cancellation and enable the Transparency mode – a mode that lets through environmental noises, allowing them to be heard by the user. Being able to disable the noise cancellation and use the Transparency mode to let environmental sounds through is actually a very useful feature, that people who often use their earbuds while having a walk or while going out for a run would certainly appreciate, as it is important to be able to hear your surroundings while you are outside. One notable example of this is if you are walking or jogging through an urbanized area, while listening to your AirPods Pro – canceling the ANC will let you hear approaching traffic, thus helping keep you safe. However, then again, you don’t need Transparency mode if you are using the AirPods 3 that let outside noises be heard by default. Also of note is the fact that the Transparency mode requires the AirPods to use more battery.

Due to their design that doesn’t have a silicone tip, the AirPods 3 do not allow for the integration of the ANC feature.

One of the improvements made to the 3d generation AirPods is the skin-detect sensor that allows the devices to more accurately detect if they are placed outside or in the user’s ear and, in turn, pause or resume playback, respectively. What makes this sensor superior to similar detection options integrated into previous models is that it works by detecting the skin moisture in the user’s ear. This helps prevent the AirPods 3 from mistaking pockets, tables, and other surfaces for the user’s skin, causing them to needlessly resume playback.

The AirPods Pro, on the other hand, uses optical sensors that simply detect how close the earbuds are to a surface. However, these sensors cannot tell the difference between different types of surfaces, which means that placing the AirPods Pro in your pocket could also cause the playback to resume without the earbuds being in your ears.

Both earbud models have sweat and water resistance. Their resistance rating is IPX4, which means that they can resist water splashes from any direction and are sweat-resistant. Theoretically, you can use them in the shower or when it’s raining outside, but you shouldn’t submerge them in water and, therefore, they aren’t fit for any type of water sport.

iOS devices with iOS 15 and later have the Conversation Boost, which allows people who have mid-hearing difficulties to be able to better hear conversations. This feature functions by using beam-forming microphones that boost the volume of the person who is talking in front of the AirPods wearer. However, out of the two AirPods models that we are reviewing here, only the AirPods Pro supports this feature.

In general, the battery of the standard AirPods 3 lasts longer than that of the AirPods Pro. In tests where the Active Noise Cancellation, the Transparency, and the spatial audio features are disabled, the AirPods Pro deliver around 4.5 hours of playback time, which is an hour and a half less compared to their standard AirPods 3 counterpart, which can offer up to 6 hours of playback with a single charge.

For voice conversations, the AirPods 3 once again outperform the AirPods Pro in terms of battery life, providing an extra 30 minutes of voice call time compared to the Pro model, for a total of around 4 hours.

These differences are further amplified if you take into account how many hours of playback and conversation time you can squeeze out with a single charge of the charging case.

If battery life is something you care about a lot, then maybe it would be better to get lower-priced AirPods 3. However, note that the differences aren’t that significant – both AirPods models have impressive battery lives that should satisfy the majority of users.

Both models of Apple earbuds offer premium sound quality – they both offer Adaptive EQ, use a custom high-excursion Apple driver and a custom high dynamic range amplifier, and feature spatial audio with dynamic head tracking. All these features, combined with the high-quality build of the two AirPods models, result in very rich-sounding audio. However, even though the standard AirPods 3 sound very well, especially considering their design that doesn’t put them in the user’s ear canal, if you are looking for the best sound possible in your new AirPods and this is a priority for you when deciding which product to purchase, then you may want to go for the Pro model, as their silicon tips allow for much more richness in the audio as well as significantly more bass.

With the latest update to the AirPods 3, the standard model of Apple AirPods has gotten a lot closer in terms of features to the higher-end AirPods Pro model. Currently, there are actually very few disadvantages that the AirPods 3 have relative to the AirPods 3, and they even have the advantage of offering a longer battery life. Therefore, if you prefer their design over the design of the AirPods Pro, you should probably go for them, especially considering their notably lower price. On the other hand, if you’d like to have access to active noise cancellation and want to get the model that offers a richer sound and more bass, you may like the AirPods Pro better.