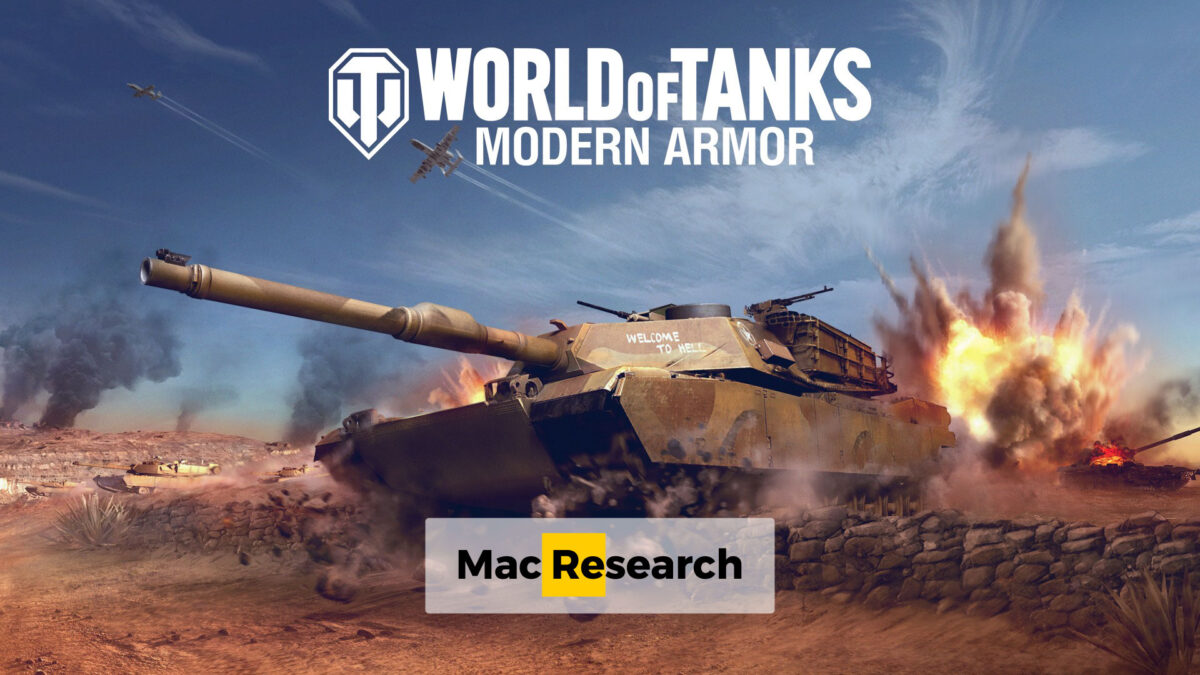 About World Of Tanks On Mac

World of Tanks is a free-to-play online historical (mid-20th century) armored tank battle game developed by Wargaming. A team’s primary objective is to eliminate the opposing force or to seize control spots on the map. Even though World of Tanks is a free-to-play game, it contains an online store that sells premium stuff and offers incentives for players to purchase premium time.

Strategic planning relies heavily on communication between the team members, so the risk of unmoderated language is considerable. Despite the game’s violence, no blood or gore is depicted, instead, immobilized, igniting, and exploding tanks serve as visual cues. Players can battle in an arena with their friends or random strangers.

World of Tanks is an online multiplayer competitive strategy game where players control mechanized tanks in a team-based armored-warfare battle arena. Light, Medium, and Heavy Tanks, as well as Tank Destroyers and SPGs (Self-Propelled Guns), are all at the disposal of the players as they navigate the conflict zone, shooting at enemy vehicles.

Up to 15-vs-15 battles are fought in which the goal is to destroy the other team’s tanks or to capture and keep control locations on the battlefield so that players can take the victory. Large explosions, smoke, and flames are common during battles, as is the destruction of tanks and other structures. Battles net you points, experience, and gold, which can be spent to improve your tank, unlock new tanks, and develop your commanders.

World of Tanks is available for Microsoft Windows, the Xbox 360, and the Xbox One platforms. A software solution developed by CodeWeavers and supported by Wargaming is available to those who want to join the army of World of Tanks players on Mac OS X.

The mid-20th century armored vehicles of this mechanized-combat game are placed in an action-packed environment that keeps players on their toes. The tanks are recreated historically correctly, and the battles are typically kept within 30 minutes. However, learning the more complicated commands requires a great deal of practice. As a team, players can use various tactics, such as ambushes, clever flank attacks, and head-on clashes, to deliver a fatal blow to their opponents.

To put it simply, the game delivers an immersion into the history of tanks and their places of origin. The United States, Japan, Russia, China, Germany, and the United Kingdom all have armored vehicles in World of Tanks. As with all Wargaming titles, this is a fun game for military fans of all ages. Parents should be aware of the unmoderated language that may be used during games when teaching their children how to play.

Aside from its entertainment value, playing World of Tanks is a wonderful experience because of its amazing visuals, acceptable gameplay sessions, and intriguing gameplay that can be enjoyed by a solo player or with family and friends for long periods of time. World of Tanks can help families talk about working together and communicating effectively in order to synchronize actions and achieve a common goal.

Is it worth it?

The battle arena game is historically-based and develops skills like applying information, making decisions, logical conclusions, prediction, and problem-solving, as well as reasoning skills. Combining knowledge and creating unique solutions are the hallmarks of creativity that players can put into use in this game.

The game embraces a fee-based pricing model and can be downloaded and played for free. For a cost of $8 to $46 a month, however, players can gain 50% more experience and gold in the game. Optional disc purchases are available (the price varies) for consoles.

Available to play since April 12th, 2011, this Multiplayer Online Game (MMOG) has mild violence and is assigned a T (Teen) rating by the ESRB.

Presently, the community of World of Tanks players consists of more than 160 million people. The players can choose from multiple game modes. If you are a fresher, you can choose to play solo or with a group, compete for dominance and move up the leaderboards, or form a clan and prepare for war on the Global Map.

Tank battles are brought to life with high-quality visuals and sound effects. Players can learn where the greatest places are to place their tanks by looking at maps and developing a winning 15v15 battle strategy by considering the roles of the opposing vehicles.

Players who want to engage in their first battles can benefit from the guides in the game’s website that provide helpful information and learn more about their team’s abilities, view the list of attainable achievements, or learn about premium accounts.

Once you join the game, over 600 mid-20th century tanks are at your command in World of Tanks. When you dive into the realistic battlefield, you can take on players all around the world with some of the most powerful military machines of the era. There is a choice of a wide range of vehicles at your command: from iconic war machines like Shermans, T-34s, and Churchills to ones that never made it to the manufacturing line. Armory combat can be learned and honed across a wide variety of settings in World of Tanks that bring historic locales from around the world to life. Over 160 million people around the world are already dedicated to the game. Bring It On!

How to play World of Tanks on Mac

World of Tanks has an official macOS version, meaning that Mac users can run it natively on their computer without the need for resorting to elaborate and time-consuming workaround methods. Additionally, the game isn’t particularly demanding (see system requirements below), so even if you own an older Mac that doesn’t have the most powerful hardware, you should still be able to run World of Tanks on it.

If you don’t have sufficient space on your Mac or simply want to keep its storage free for more necessary data, it’s also possible to play World of Tanks using cloud technology, without even needing to install the game. Nowadays, cloud-gaming services are very popular among Mac users as they allow for quick and easy access to many games, including ones that cannot natively be played on a Mac. In addition to showing you how to install World of Tanks on your Mac, we will also provide you with instructions on how to play the game through two such cloud-gaming services, namely Boosteroid and GeForce Now.

World of Tanks Set Up Methods

World of Tanks with Cloud Gaming

World of Tanks is now available to play on cloud gaming servers. This assures NO
compatibility issues while playing on your Mac as well as top-notch performance.

Step 1. Register for World of Tanks

You can go straight ahead and . You can register at Wargaming.net. If you feel the game graphics are under-performing, you can proceed to step two where you can upload the game to the cloud gaming library for better performance.

All you need to do now is register for Boosteroid. This allows you to add World of Tanks to their Cloud Gaming Library. Once signed in you can seamlessly play the game from your Mac or any other device.

How to install World of Tanks on Mac

This is the intended way of playing the game – you simply download its .dmg installation file, perform the installation, and then start the game.

Here are the specific instructions:

How to play World of Tanks Cloud Gaming

Boosteroid lets you play a wide variety of games directly from your Safari or Chrome browser, without the need to install the games on your Mac. In addition to saving space on your Mac, another huge advantage of this, and other similar services, is that they can enable Mac users to play games that are normally unavailable for macOS. In the case of World of Tanks, the game does have a Mac version, but you could still play it through Boosteroid. If you want to play World of Tanks but also want to play other games that aren’t supported for macOS, using Boosteroid could be a great way of gaining access to all the games you want without needing to install anything on your Mac. Here is how you can quickly set up your Boosteroid account and start using the service for gaming on Mac.

GeForce Now is a service similar to Boosteroid, which lets players use cloud technology to play games that aren’t installed on their machines. The two noteworthy differences between the two cloud-gaming services are that GeForce now offers a free version, with certain limitations, and that GeForce Now requires you to install a client app in order to use the service, and it doesn’t work directly from the browser. Other than that, the difference between it and Boosteroid isn’t significant, and choosing which service to use would normally boil down to what games are available in the library of either one. In the case of World of Tanks, the game is present in both service’s libraries. Here are some quick instructions on setting up and using GeForce Now:

If you prefer to read more detailed instructions on how to set up and use GeForce Now, you will find them on this page.

World of Tanks on Mac M1

The only time when there’s any significant difference between the methods used to play games on Intel and M1 Macs is when we are talking about games that aren’t officially available for macOS. However, since World of Tanks has a macOS version, the way to play it on a Mac computer is always the same regardless of whether it’s an Intel-based Mac or an M1 model. The same applies to the cloud-gaming solutions – the cloud-gaming instructions shown on this page apply to both M1 and Intel Macs.