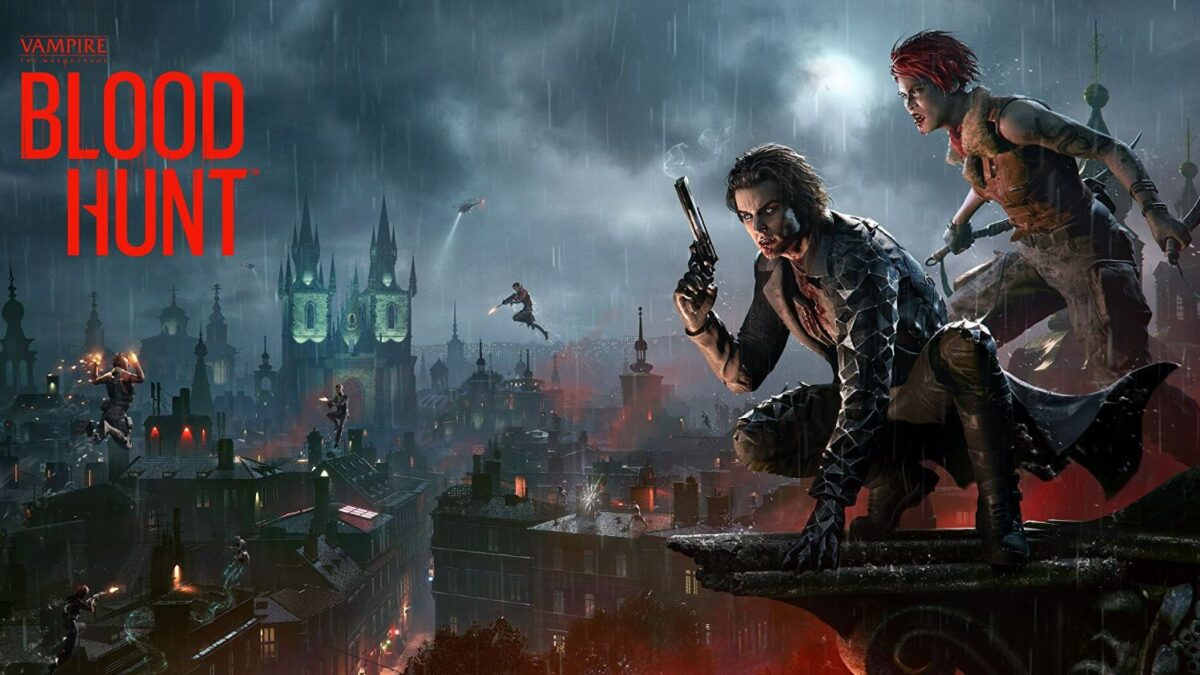 Vampire: The Masquerade – Bloodhunt on Mac

Vampire: The Masquerade – Bloodhunt, released in April 2022, is yet another take on the already saturated battle royale genre, but while it’s not a game without its issues, it does manage to add some interesting new elements to the battle royale formula as well as provide an interesting new setting. This is a free-to-play game that can be acquired on Steam, but it currently has no macOS version and will likely not receive one in the near future, so if you are a Mac user looking to give Vampire: The Masquerade – Bloodhunt a try, you will need to employ some alternative methods. There are quite a few workarounds that you can try, and we will show you the most viable of them in the second half of this post. First, however, we wish to tell you a bit more about Vampire: The Masquerade – Bloodhunt and share with you our thoughts on the game.

One of the cooler parts of Bloodhunt is the game’s setting and the aesthetic of that setting. The arena in which the battle royale takes place is in the city of Prague, which is portrayed beautifully, with lots of attention to detail and with a surprising amount of polish for a game that’s developed by a relatively small gaming company – Sharkmob AB. All matches take place at night, providing the perfect brooding, dark, and exciting atmosphere fit for a game about vampires. If you’ve seen the first Underworld movie (a film about vampires), Vampire: The Masquerade – Bloodhunt feels exactly like the beginning scene of that film – you are a vampire on the hunt, jumping from one rooftop to the other, driven by hunger and bloodlust.

Unlike the majority of other battle royale games, Bloodhunt has only one map, at least for the time being. Over time, this can start to become dull for some players, but the developers have made it so that the loot and loot locations are randomized for every match, so you will never find the same thing in the same place twice. Of course, this isn’t anything novel, but it still manages to add some variety to the game and encourage players to explore every nook and cranny in search of better gear and items.

Vampire: The Masquerade – Bloodhunt doesn’t reinvent the wheel of battle royale gameplay, but it does introduce some small additions that, in our opinion, manage to keep the game fresh and differentiate it from other games in the genre. The game is played in third-person and, as expected, you start from a chosen spot on the map, search the city for weapons, gear, and other helpful items, and eliminate anyone who comes in your way, while trying to be the last surviving player, all the while the ring of deadly gas surrounding the map gradually shrinks, forcing the players to get closer to one another.

You also get different vampire classes, and the cool thing about this is that each class represents a different species of vampires with its unique traits and abilities. Every class has two special abilities as well as different stats, weapon specializations, and play styles. There are six classes in total, and they are all fairly balanced, although the Enforcer class may feel a bit overpowered at times, due to its tankiness.

Another cool feature of the gameplay is the blood system. You play as a vampire so, naturally, you feed on human blood, and there are humans on the map that you can hunt down and feed on. Aside from healing you, feeding on the blood of a living human also grants you a special passive effect, such as higher strength, speed, toughness, faster recharge speed on the two special abilities, or even an extra life.

Speaking of lives, another interesting thing this game does is that it gives each player two lives, which is unusual for a battle royale. This means that even if you get taken out early on, you get to respawn several seconds later and try again, which makes the game less punishing to newer players. One downside here is when you play in party mode when you play in a team with two other players rather than solo. In party mode, if you get killed, you cannot revive as you can in solo mode. Instead, a teammate needs to go to a designated spot on the map and channel for a couple of seconds to revive you. This actually makes the game less fun in party mode, and it’s overall a weird mechanic that would hopefully be revamped in the future.

The final deviation from other battle royale games is that the maximum number of players on the map is 41. In most other battle royales, the maximum number is a 100, so having fewer players allows you to spend more time exploring, getting to know the map, finding the loot that you need, and preparing your build for the later stages of the game, when the action starts to ramp up. This is yet another aspect of the game that makes it more forgiving towards inexperienced battle royale players, and it also allows you to take in the nice atmosphere of the game that we already mentioned.

Despite the surprisingly polished and pleasant atmosphere and balanced and competent gameplay, Vampire: The Masquerade is far from a perfect game, and it does have quite a few problems. One of the main issues at the moment is the abundance of hackers on its servers and the inability of players to report them. This, combined with the lack of good moderation, leads to a pretty bad gaming community and seriously downgrades a game that could otherwise be a lot of fun. Add to that the other downsides that we already mentioned – the badly-designed trios (party) mode and the disconnect from the actual Vampire: The Masquerade universe and you get a game that, despite its promising looks and unusually-high level of polish, still requires a lot of work to get to a level of quality that it aspires towards. Overall, the game simply feels unfinished and feels like it may get a lot better if the necessary work is put into it.

There are currently some bad reviews of Vampire: The Masquerade – Bloodhunt and the points made in them are often perfectly justified. However, despite the flaws that Vampire: The Masquerade – Bloodhunt has, there is actually a game that has the potential to be something interesting and highly-enjoyable, that provides fans of the battle royale genre with a new fresh take on this gameplay formula.

As it stands right now, we can recommend at least giving Bloodhunt a try, considering it is a totally free game. However, do take into account the downsides we mentioned and do not go in expecting a flawless experience.

Can you play Vampire: The Masquerade – Bloodhunt?

It’s a surprise to no one that Vampire: The Masquerade – Bloodhunt is a game that’s not supported for macOS systems. However, as is with many other unsupported games, there are still ways to play them on a Mac, with some of those ways being surprisingly simple and straightforward. Below, we will give you instructions for four methods that you can use to play this game on your Mac, so simply pick the one you think would be the best method for you and complete the steps to play Vampire: The Masquerade – Bloodhunt on your Mac.

How to play Vampire: The Masquerade – Bloodhunt on Mac

Obviously, using cloud gaming to play a given game won’t be the same as playing that game natively, but unless you are a hardcore completive gamer and as long as you have a fast and stable connection to the Internet, playing Bloodhunt through a cloud gaming service should prove to be a pleasant experience. We will now show you two cloud gaming services – Boosteroid and GeForce Now – that feature Bloodhunt in their libraries and that you can use to play this game on your Mac. Setting up the two services is similar, but we’ve still made sure to provide a separate guide for each one.

How to Get Vampire: The Masquerade – Bloodhunt on Mac:

Now you will need to register for Boosteroid. This allows you to add Vampire: The Masquerade – Bloodhunt to their Cloud Gaming Library. Once uploaded you can seamlessly play the game from your Mac, TV, or Mobile Device.

Play Vampire: The Masquerade – Bloodhunt on Mac with Boosteroid

Play Vampire: The Masquerade – Bloodhunt on Mac with GeForce Now

How to download Vampire: The Masquerade – Bloodhunt on Mac

It is also possible to play the game by actually having it downloaded on your Mac, but note that the way to achieve this requires significantly more time and effort compared to the cloud gaming method. As mentioned, to download and install the game, you will need to do so either in a Windows partition or in a Windows virtual machine on your Mac. To install Windows in a separate partition, you can use the proprietary Boot Camp Assistant Apple app. To create a Windows VM, you can use the Parallels virtualization tool. These two methods are performed differently and can provide different performances depending on what Mac you are using. Generally, we recommend Intel Mac users to use the Boot Camp Assistant method and M1 Mac users to use the Parallels method. Below, you will find a short description of the steps for each of the two methods, followed by a link to a more detailed guide on our site.

Three of the four methods of playing Vampire: The Masquerade – Bloodhunt on Mac that we’ve shown here can be used to play the game on an M1 Mac. The only method that isn’t available to M1 Mac users is the Boot Camp Assistant one, because Windows 10 cannot be installed on M1 Macs due to incompatibility of the OS with the M1 chip architecture.

Other than that, you can still play the game on a M1 Mac with by streaming it via Boosteroid or GeForce Now, and you can also create a Windows 11 virtual machine, install the game in it, and play it in this way.