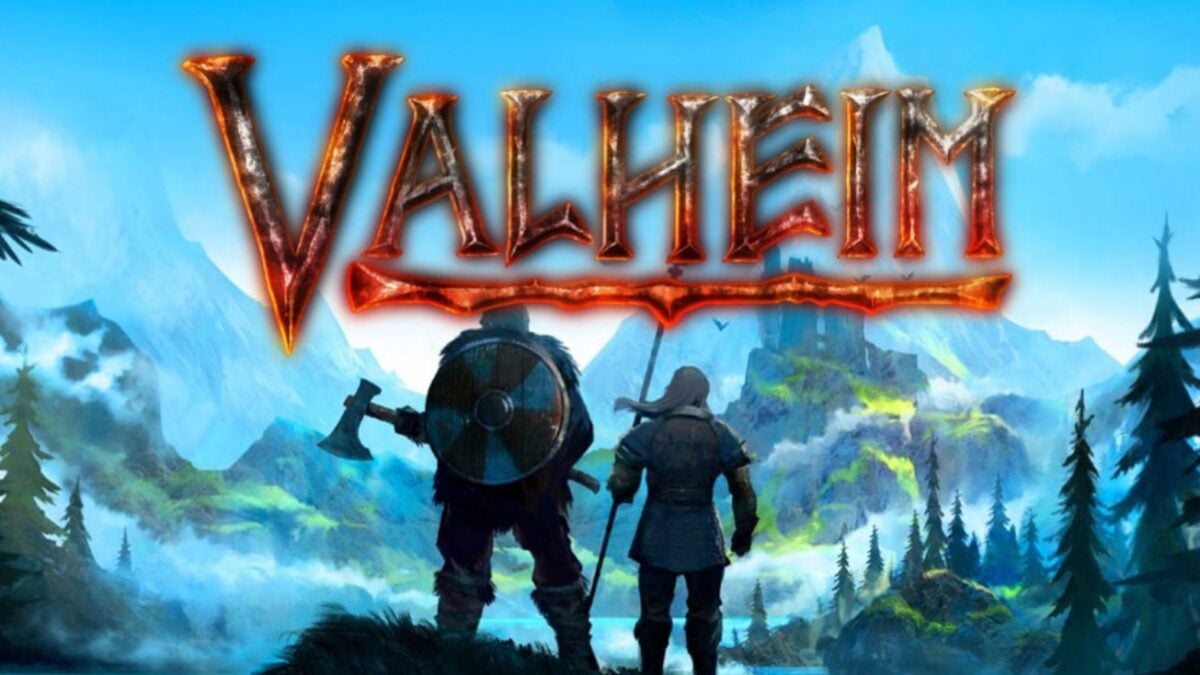 Valheim is playable on Mac by streaming the game via Boosteroid, GeForce Now, or other game streaming services that feature it in their libraries. You can also play Valheim on Mac by installing Windows on your Mac or by creating a Windows VM.

Valheim is an indie survival sandbox game inspired by Norse mythology that’s currently in early access, yet despite this, it has already become one of the most played games on Steam at the current moment, with over five million sold copies in the first month of its early access release. Below, you can read our thoughts on the game, and after that, you will find instructions on how to play it on your Mac.

As mentioned, Valheim is a game clearly inspired by Norse mythology. The game is set in an in-between dimension (Valheim) that serves as a type of purgatory, where fallen Viking warriors go before they are allowed into Valhalla. The goal of each fallen Viking who gets sent there is to summon and defeat several legendary creatures (the game’s bosses) in order to be granted passage into Viking heaven – Valhalla.

The map in Valheim is procedurally generated, so each playthrough will be on a unique map. However, every map is split into the same biomes – meadows, the Black Forest, mountains, the Mistlands, swamps, plains, the Ashlands, oceans, and the Deep North. Every biome features unique items, enemies, and bosses and also differs in difficulty.

One of the main draws of this game is its world – it’s vast, expansive, and unique for every playthrough due to it being procedurally generated. However, even though the maps aren’t hand-crafted, they often feel that way due to the beautiful yet believable and authentic landscapes that closely resemble Northern Europe.

For anyone who has played survival, sandbox, and/or crafting games like Rust, The Forest, or ARK: Survival Evolved, the gameplay, and mechanics of Valheim should feel fairly familiar. In many ways, the survival and crafting part of Valheim’s gameplay is like that of a lot of other games of the same genre that have come before it. Your character is thrown into an inhospitable world with next to nothing, and you need to slowly and persistently gather resources from the environment, craft tools, improve your gear, level up your character, and eventually complete the game’s main quest which, in this case, is to defeat five different bosses that first need to be summoned by giving a specific item as an offering at the altar of each boss. The game’s developers have stated that the final release version of the game will feature four additional bosses for a total of nine.

What makes Valheim stand out in terms of gameplay, however, is its distinct focus on combat, borrowing ideas from more action-oriented titles. Combat plays a very large part in Valheim and the combat system feels refined, responsive, challenging, but also fair and, above all else, satisfying. You can craft (or find) and use a variety of weapon types – swords, axes, clubs, polearms, spears, daggers, and bows. There are one-handed and two-handed weapons, there’s also dual-wielding, and every weapon has different stats and handling. The game also offers a wide variety of shields and other defensive equipment, which further diversifies the combat system.

As we said, the end goal of each playthrough is to get through the five (nine in the finished game) bosses. However, there are many other types of enemies spread across the huge procedurally generated map of Valheim. From small and pesky ones that are more of an annoyance than an actual challenge to large enemies such as trolls or sea monsters that should be avoided early in the game and are still tough to take down even once you’ve become more skillful and have acquired or crafted better gear for your character.

One of the coolest parts of Valheim’s gameplay is building your own Viking longboat ship and setting out to slay the next boss or even simply to find more hospitable lands. This aspect of the game does a very good job at replicating the feeling of awe and excitement of embarking upon a long and probably perilous journey with an uncertain conclusion but also with the promise of a generous reward at its end – a feeling that’s only amplified if the experience is shared with friends. Yes, though Valheim can be played in single-player without a problem, you can also play it in co-op with up to nine other players and together brave the dangers of the land and overcome its challenges like a true band of Viking raiders.

As expected for a game of the survival genre, a major aspect of the gameplay is taking care of your character’s well-being even when they are outside combat. Unlike other survival games, however, in Valheim it’s much easier to keep your character alive. Even though there are areas that would rapidly drain your health if you go there unprepared, there isn’t a stat in the game that’s constantly being drained, and you need to keep it from getting down to zero, lest your character would die. For example, you can consume food in the game and food helps regenerate your health and stamina and can also provide you with helpful temporary buffs if you manage to provide your character with a balanced diet, however, your character cannot die of starvation. In other words, the survival element in Valheim isn’t as pronounced and as in other similar games, which is why it feels more like a combination between a survival sandbox game and an action RPG.

Overall, the gameplay is well-polished and familiar, but also engaging and enjoyable. The only downside we could point out here is that, as with many other games of the same genre, it eventually gets to a point in the late game, where progressing further requires a lot of tedious grinding.

We typically do not talk exclusively about graphics, but here it’s worth mentioning that Valheim’s developers have decided to create their game with distinct low-poly graphics rather than trying to make the game look as HD as possible. Though at first look, some players may get turned off by that, this creative choice fits nicely with the theme and setting of the game and gives its world a more mystical and fairytale-like quality. Besides, the art direction in the game is spot on, making the world of Velheim feel vibrant and beautiful, almost as if everything has been hand-drawn, rather than generated by a computer. In our opinion, this gives the game a distinct identity and helps it stand out as something unique.

Though still in early access, Valheim has already won the hearts of many with its beautiful and immersive setting and its polished and diverse gameplay. It is a great game to play together with friends in PvE or PvP, and it is also a great single-player experience. It is absolutely worth its price even if the game isn’t fully finished yet, and we can recommend it to anyone who likes survival sandbox games and/or open-world RPGs, especially if you enjoy Norse mythology.

Can you play Valheim on Mac?

Unfortunately for Mac users, Valheim isn’t available for Mac, and it’s unclear if it would ever get a macOS version. However, the good news is that there are still quite a few methods that can let you enjoy this game on your Mac computer, and we will explain them to you in the following lines.

How to play Valheim on Mac?

Generally, the streaming option is the one we’d recommend as it has very little setting up and would let you play the game even if your Mac doesn’t meet all of Valheim’s system requirements. The only downside is that, if your Internet isn’t good enough for the streaming to be stable, you may experience performance stutters from time to time. Below, you can see two short guides on how to use Boosteroid and GeForce Now, respectively, to play Valheim on your Mac.

The other option where you install (or emulate) Windows on your Mac is a bit more complicated and time-consuming, but it’s still a viable way of playing Valheim on Mac, which is why it, too, will also be shown to you further down this page.

To Get Valheim on Mac:

Now you will need to register for Boosteroid. This allows you to add Valheim to their Cloud Gaming Library. Once uploaded you can seamlessly play the game from your Mac, TV, or Mobile Device.

Boosteroid works directly from the browser and though you should be able to play games in Boosteroid through any browser, it’s recommended that you use either Google Chrome or Opera for best performance.

You can find a more full guide on using GeForce Now on this page.

There are some pretty important differences between these two methods of getting Windows on your Mac which one is preferable over the other in different situations, but the general rule of thumb is that if you are on an Intel-based Mac and that Mac has enough storage, it’s better to go for the Boot Camp method. Conversely, if you are on an M1 Mac, you should go for the Windows-emulation method using Parallels or another similar software, as the Boot Camp method isn’t applicable for Macs with M1 chips.

Below, you can see a concise explanation of how to use either of those methods to get Windows on your Mac in order to be able to run Valheim. For more detailed instructions, please, visit the full guides that we’ve linked there.

As mentioned above, the commonly used method of playing games on Mac by installing Windows 10 on them using Boot Camp Assistant is not applicable for M1 Macs due to the different architecture of their M1 chips. However, this still leaves you the option to use cloud gaming to play Valheim without even needing to download the game. Additionally, if you still want to be able to download the game on your Mac and play it that way, you can use a virtualization program such as Parallels to create a virtual Windows 11 machine, in which you can download and play Valheim.

Best Simulation Games for Mac in 2022