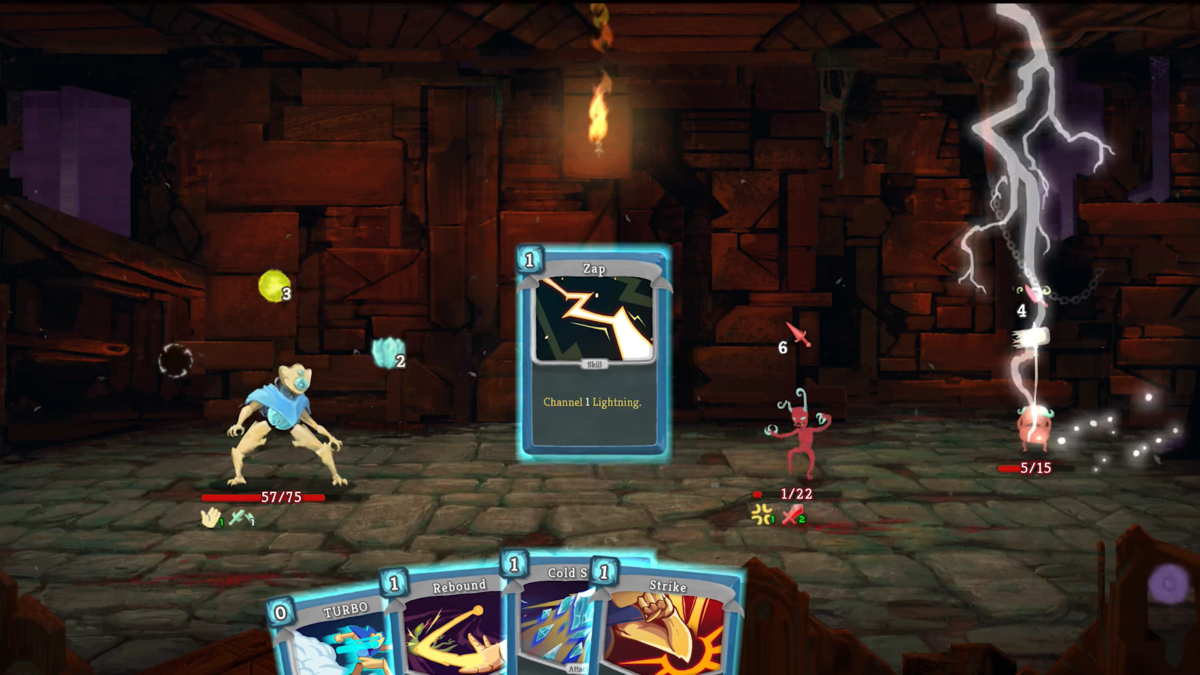 Slay the Spire on Mac

Slay the Spire is a single-player deck builder that combines elements of card games with roguelike-inspired progression systems. In the game, the player gradually builds a one-of-a-kind deck of cards, with which he faces off against strange creatures, unlocks new powers, and discovers relics, in a series of card game encounters.

The gameplay revolves around ascending a spire of floors (levels) while fighting off enemies and bosses along the way. At the beginning of a playthrough, the player chooses one character from four pre-set options. The selected character comes with specific base stats (such as health, gold, and a relic that grants him a special ability) and a starting hand of cards.

The game’s combat system is based on a series of card games (with new cards being earned as rewards from battle and other means), and deck-building strategies.

The player’s deck consists of attack cards designed to deal damage, skill cards that buff the player or debuff the opponent, and block cards that grant the player a temporary advantage in combat. Battles are turn-based.

The player can play any combination of cards from their hand, as long as they have enough energy to cover the energy cost of these cards. The game is over if the player’s health bar reaches zero, in which case they must start again at the base of the spire.

When the player kills a monster in an encounter, they receive gold and a random card from a pool of three to add to their deck. Defeating monsters may also drop relics that provide permanent character buffs for the duration of the game, (such as increased maximum health, additional energy points, and automatic blocking), as well as one-use potions that can be used during any turn to restore health, buff the player, and debuff or damage the enemy.

To win in Slay the Spire, you need to figure out how to best use the cards you obtain and how they’ll work in combination with any relics you manage to gain. The game requires you to carefully consider which cards are the best fit for making the deck effective, when to refuse to add new cards, and when to remove cards in order to maximize the deck’s strength.

Can you play Slay the Spire on Mac?

Slay the Spire can be installed and played on Mac because the game has an official macOS version. Mac users who want to enjoy Slay the Spire can download it from Steam and install it on their machines directly.

If you don’t want to go through the process of downloading and installing Slay the Spire, there is another quick and convenient solution. You can play Slay the Spire with Boosteroid or GeForce Now – two popular cloud gaming platforms that support the game in their library.

Streaming Slay the Spire in your browser with any of the cloud gaming solutions does not require the installation of anything. You can play the game immediately after you create an account and subscribe to the service. Plus, this method saves valuable disk space on your Mac.

The official macOS version of Slay the Spire can be downloaded and installed on your Mac from Steam. So, if you want to play Slay the Spire and have a Mac (be it with an Intel or an M1 processor), you need nothing more than a Steam account and a Steam client to get the game. Of course, do a quick check of the recommended system requirements from the game’s developer to enjoy a smooth play before you start your download.

How to play Slay the Spire on Mac?

You can play Slay the Spire on Mac via cloud gaming options like Boosteroid and GeForce Now, or if you install the native macOS version of the game.

How to play Slay the Spire on Mac M1?

Mac M1 users can play Slay the Spire with Boosteroid and GeForce Now, or after they download the native Mac OS version of the game from the Steam store.

In case you choose to stream Slay the Spire with Boosteroid or GeForce Now, you should know that your gaming experience will rely mainly on the stability and speed of your internet connection. There is no need to download and install the games on your Mac, which can save valuable disk space and time.

In case you prefer to play Slay the Spire on your Mac machine without relying on your internet, you can download it from Steam with the help of the instructions below and then install the game on the system.

Play Slay the Spire on MacOS with Steam

Play Slay the Spire on Mac with Boosteroid

You can play Slay the Spire on Mac (M1 and Intel models) with Boosteroid. Read our detailed guide.

How to Play Slay the Spire with Boosteroid

Play Slay the Spire on Mac with GeForce Now

You can play Slay the Spire on Mac (M1 and Intel models) with Geforce Now. Read our detailed guide.

How to Play Slay the Spire with Geforce Now
Mac How To, reviews