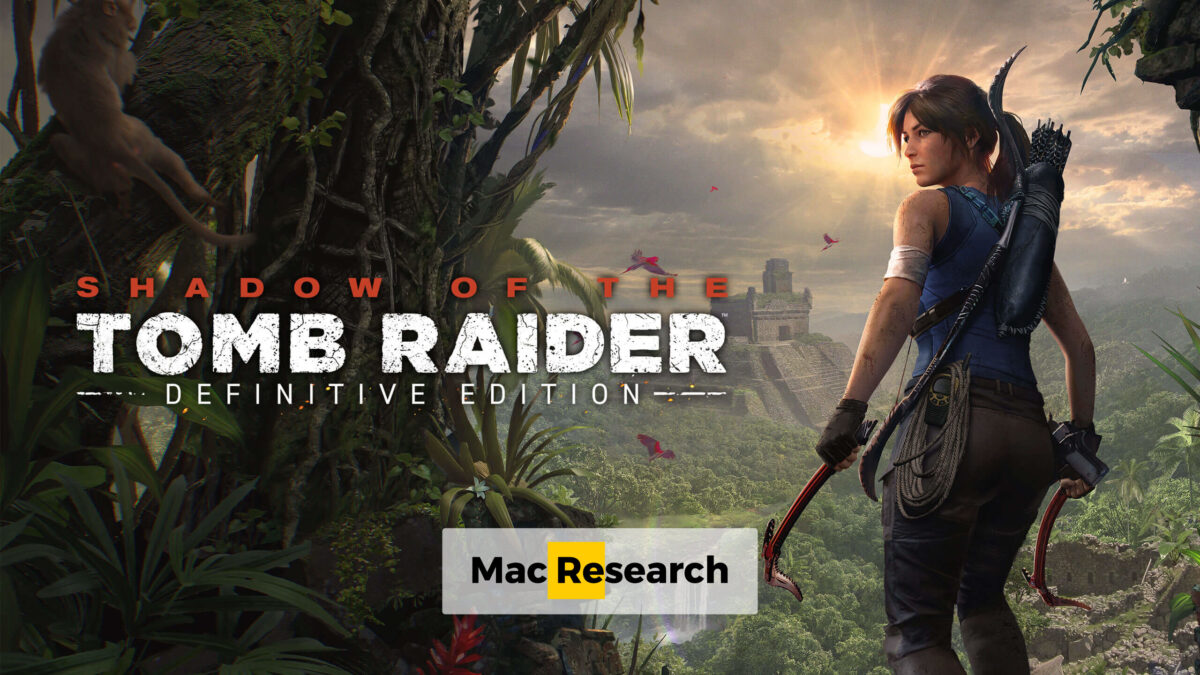 Play Shadow of the Tomb Raider on Мac Tutorial

About Shadow of the Tomb Raider on Mac

Shadow of the Tomb Raider is the final part of the Tomb Raider trilogy. The action-adventure video game, developed by Eidos Montreal and Crystal Dynamics, follows the well-known character, Lara Croft, as she strives to stop The Order of Trinity from discovering artifacts that could destroy the world.

This time, the tale revolved around an imminent apocalypse and Lara’s quest for an ancient relic that can stop it, leading her to the mysterious City of Paititi hidden in the dark jungle of South America.

To Shadow of the Tomb Raider story begins with an apocalypse. Enemies warn Lara of the impending catastrophe when she steals an ancient dagger. This becomes obvious as a violent tsunami rips over Mexico, killing hundreds and leaving our heroine a total mess.

Playing as Lara, you’ll still be swinging from walls, stealing treasures, and upgrading powers until you’ve evolved from superhero to demigod. The Shadow of the Tomb Raider game is mostly emphasizing on the fun.

Thankfully, traditional firefights are kept to a minimum, giving more space for mudslinging and choking victims like a little Rambo, instead. You can also hide in the jungle bushes and string enemies up with a rope.

The environment is big to explore and interconnected, with areas inaccessible until a certain piece of gear is found, and the ability to fast-travel between campfires that you’ve lit on the way. Paititi, a beautiful and bustling mountain city, is one of the most atmospheric. The world-building is great and talking to people, and caressing llamas is a nice change of pace. You can even take on side tasks to help the locals.

In Shadow, you can kill animals to make new clothes, scavenge for materials to enhance weapons, and explore hidden crypts.

Exploring Mexico and Peru’s dense locations is fun. The game’s jungles are challenging and infinite, ruined tombs are wonderfully designed, and major towns are huge and vibrant. Finding the game’s antiques, treasure chests, and other items is fun, as they give you an incentive to go sightseeing. Underwater exploration is heavily emphasized.

Shadow of the Tomb Raider emphasizes swimming, with air pockets allowing for longer underwater sections. Submerged regions of tombs will require you to dive to free stuck machinery or find lost treasures. Underwater exploration is made more fun by improving Lara’s swimming speed and breathing capacity. You can also swing across a gap or rappel down from a climbable surface. There are a lot of methods to get around the environment, so it’s always exciting to be at the bottom of a huge structure, wondering how you’ll get to the top.

In this game, Lara has a lot of drive and confidence, and her enemies dread her. Again, Lara’s Survival Instincts will tell you which enemies are safe to kill without waking others, but it can also disclose puzzling enemy AI inconsistencies.

But it’s the challenge tombs that are the most rewarding and worthwhile side activity, with a prize at the end and a story to uncover through diaries and artifacts.

Tombs are more dangerous than ever, demanding advanced traversal tactics to reach and hide from deadly challenges once you get inside of them. Many of the challenge tombs include lethal traps.

The quest for hidden information in relics is there, but this time it’s more challenging, especially if you’re using a keyboard and mouse. A great tip to make things less frustrating is to use a controller to look for hidden data in relics. The controller’s vibrations will tell you if you found the concealed information.

The cinematography and images are stunning, from the lush green Peruvian rainforest to the buried stone city and lava-filled tombs. Cutscenes can add to the story’s immersion. Lara Croft looks amazing. The physics are noteworthy, as does the game environment. The music in the game is tense, spine-tingling, and anxiety-causing. Immersion Audio allows NPCs to communicate to Lara in their local tongue, whether Peruvian or Mayan.

Can you play Shadow of the Tomb Raider on Mac?

If you want to dive into Lara Croft’s jungle adventure, you can play the game on your Mac, as long as it supports the minimal requirements listed below:

How to play Shadow of the Tomb Raider on Mac

Shadow of the Tomb Raider (and other modern Tomb Raider games for that matter) is surprisingly available for macOS, so there’s no need for elaborate and complex workaround methods to get the game running on a Mac that meets its system requirements. However, this game isn’t small in size so it may take a significant portion of your Mac’s drive in order to install it. If you don’t have enough space on your Mac or would simply prefer to keep your free storage unoccupied and available for more important data, then you can instead opt for playing this game through a cloud-gaming, as this won’t require you to actually install Shadow of the Tomb Raider, only your Mac in order to play it.

Two other huge advantages of this type of service are that they also allow you to play games that are not officially supported for Mac, as well as games that have too high system requirements for your Mac.

In the following lines, we will present to you three methods of playing Shadow of the Tomb Raider on Mac – through the Boosteroid and GeForce Now cloud-gaming platforms and by directly downloading the game from Steam on your Mac. Pick the method that you think would work the best for you and follow the instructions included below to use it for playing the game. Note that, no matter which method you choose to use, you will need to have already purchased the game on Steam, so go to Steam’s website, create a new account or log in to one that you already have, and buy Shadow of the Tomb Raider.

Shadow of the Tomb Raider Set Up Methods

Shadow of the Tomb Raider with Cloud Gaming

Shadow of the Tomb Raider is now available to play on cloud gaming servers. This assures NO compatibility issues while playing on your Mac as well as top-notch performance.

Step 1. Get Shadow of the Tomb Raider

You can go straight ahead and buy Shadow of the Tomb Raider from the Steam store. You can play the game right away after you have purchased it. If you feel the game graphics are under-performing, you can proceed to step two where you can upload the game to the cloud gaming library for better performance.

Step 2. Register and Add Shadow of the Tomb Raider to Cloud Gaming Library

All you need to do now is register for Boosteroid. This allows you to add Shadow of the Tomb Raider to their Cloud Gaming Library. Once uploaded you can seamlessly play the game from your Mac, TV or mobile device.

When Registered you will have additional access to more than 70 top-rated games for free. Pricing varies depending on the subscription plan. Full Guide Bellow

Play Shadow of the Tomb Raider

Play Shadow of the Tomb Raider with Boosteroid

Play Shadow of the Tomb Raider with GeForce Now

In case you need a more in-depth description of how to set up your GeForce Now account and use it for gaming on your Mac, visit this link.

How to download Shadow of the Tomb Raider on Mac

Before downloading Shadow of the Tomb Raider, first, make sure there’s enough free storage space on your Mac’s drive to accommodate the game. The game’s size is around 40 GB, but it’s important to have more than that on your Mac, as it’s recommended to always have at least 20-30 GB of free storage space on a Mac, or else the computer may start to experience errors and performance issues. Therefore, have at least 70 GB of free storage before attempting to install the game. Also, check the system requirements for Shadow of the Tomb Raider and see if your Mac meets them. If the computer isn’t powerful enough, your only option of playing the game on it remains the use of a cloud-gaming platform.

If your Mac has the storage space and necessary hardware specifications to run the game, here’s how to download and install it:

Shadow of the Tomb Raider on Mac M1

Shadow of the Tomb Raider is a rather demanding game, so playing it directly from the computer after downloading the game, rather than using cloud gaming, is only recommended for users with newer and more powerful Macs. M1 Mac models should, therefore, generally do better at running this game smoothly and with decent frame rates. On the other hand, if you are using an older Intel-based Mac that doesn’t meet the system requirements of the game or only meets the minimum ones, it’s better if you opt for the cloud-gaming option, as this will likely allow for better performance.