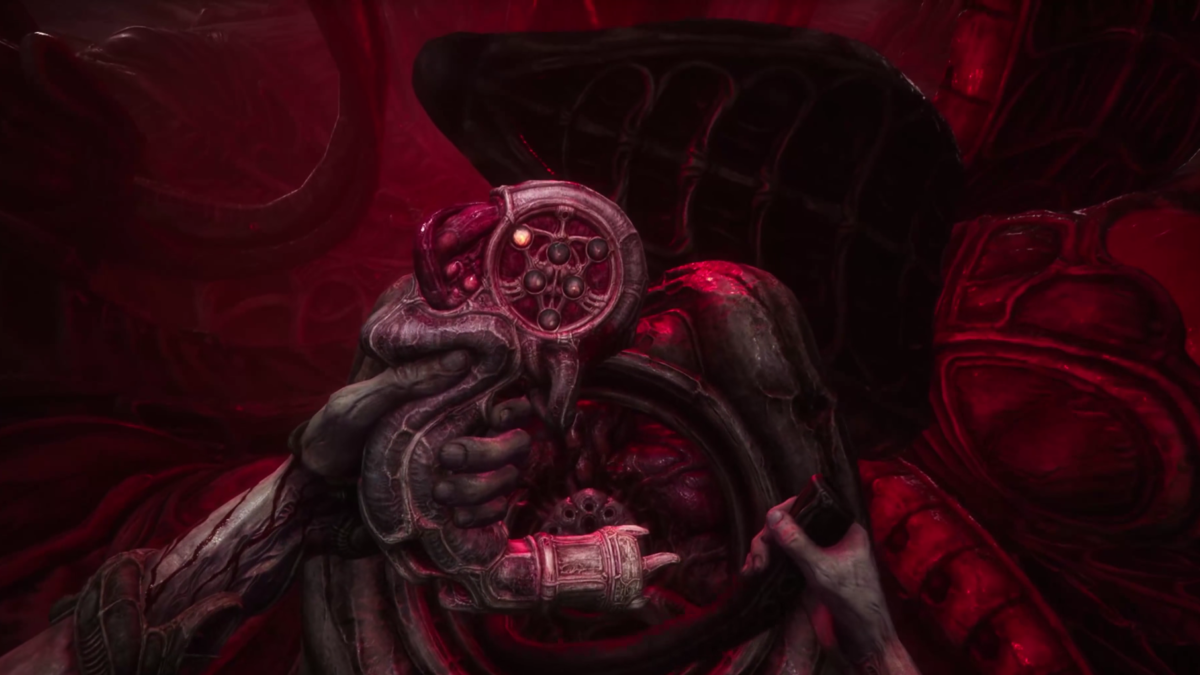 Scorn is a biopunk (a science fiction subgenre that focuses on biotechnology) survival horror adventure game played from the first-person perspective.

The player controls a humanoid character who explores a nightmarish extraterrestrial world teeming with bizarre species and techno-organic structures made of machinery, flesh, and bone. During gameplay, the player looks for answers by wandering around the game’s world and exploring its many connected locations.

When it comes to defense, there are a number of different biomechanical weapons to choose from. A handgun and a three-barreled shotgun that shoots organic spikes are the two main weapons.

The fighting is intense but infrequent. The gruesomeness of the creatures that attack you makes for some significant jump-scares. The game is expertly crafted to make you want to go back for more. The artistic work alone is enough to justify the purchase of this title, but the creepy environment also has a lot to offer.

Can you play Scorn on Mac?

You can play Scorn on Mac, even though there is no official Mac support for the game. The quickest way to play games that are not Mac-supported is by using a cloud gaming service like Boosteroid or Geforce Now. The good news is that you can also play the Windows version of Scorn on a Mac by installing Windows using Parallels or Bootcamp Assistant. These programs allow you to run Windows apps and games on a Mac as if it were on a Windows PC.

You can download Scorn on Mac and play it locally with the help of specialized software. Parallels and Boot Camp Assistant (for Intel Macs only) are two programs that may help you to install Windows OS on a Mac and then download Scorn on the Windows VM/drive. The drawback of this method is that you need to install additional software to create a Windows environment inside your Mac, but, presently, this is a workaround that will allow you to play Scorn in a matter of minutes.

How to play Scorn on Mac

You can play Scorn on Mac via cloud gaming options like Boosteroid and Geforce Now or by installing Windows on your Mac via Parallels or Boot Camp Assistant.

How to play Scorn on Mac M1

Play Scorn on Mac with Boosteroid

You can play Scorn on Mac (M1 and Intel models) with Boosteroid. Read our detailed guide.

How to Play Scorn with Boosteroid

You can play Scorn on Mac (M1 and Intel models) with Geforce Now. Read our detailed guide.

How to Play Scorn with Geforce Now

Play Scorn on Mac with Parallels

You can play Scorn on Mac (M1 and Intel models) by installing Windows on your Mac with Parallels. Read our detailed guide.

How to Play Scorn with Parallels

You can play Scorn on Mac (Intel models only) by installing Windows on your Mac with Boot Camp Assistant. Read our detailed guide.

How to Play Scorn with Boot Camp
Mac How To, reviews