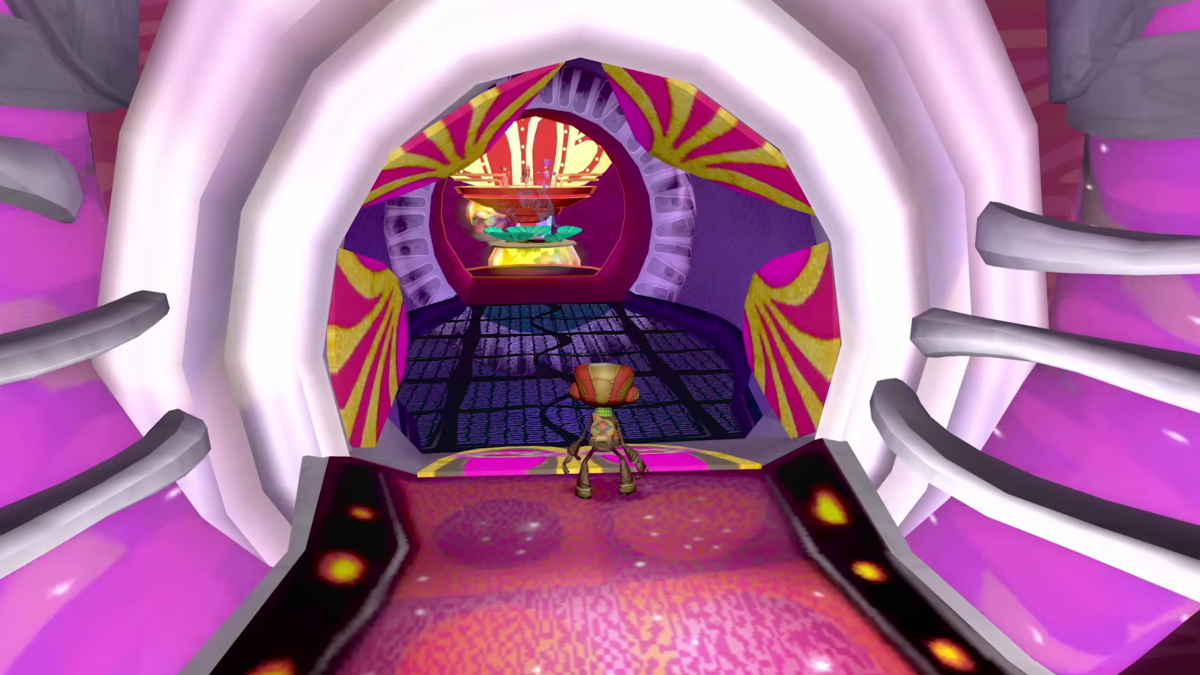 Psychonauts is an action-adventure platformer that follows the adventures of a young boy with the psychic abilities to project himself into the minds of others. During the game, the character finds out that he is the only one capable of stopping a malicious scheme. To achieve that, he has to assist some eccentric characters he meets to overcome their mental fears and memories and get them to help him in various ways.

Players play from a third-person perspective and control the protagonist, Razputin (Raz), (who becomes a Psychonaut in training in a fictional summer camp) and start exploring the fantastic realms of the inner minds of various non-playable characters.

The gameplay consists of levels which the player has to pass. The core game mechanics include running and leaping, but as the character progresses, he acquires more advanced psychic abilities, such as telekinesis, levitation, invisibility, and pyrokinesis, that he can use to fight mental demons, uncover hidden memories and sort emotional baggage.

These abilities can be unlocked in a variety of ways, including by completing narrative-related missions or by collecting specific items found around the camp.

The setting of the game is a made-up children’s camp, called Rock Psychic Summer Camp, that serves as the background for the events of the narrative.

The camp and its environments make up the “real world” of the game, but parallel to it, there are numerous “mental worlds” that reside in the minds of the game’s characters and serve as game levels.

These mental worlds vary greatly in terms of graphic style and level design, but they all require the player to address a character’s psychological problem in order to progress.

There are different collectible items in each mental world that the player can use while he passes through the level. Some of them can be used to unlock a short series of slides with more information about the past of the characters with psychological problems.

Most of these mental world levels lead up to a boss fight that the player has to win to end the character’s internal conflict and move the plot forward. After completing a level, the player can go back and look for any collectibles they may have missed.

The enemies the player has to fight consist of creatures with psychical powers who roam around the camp at night, as well as scary beings found in the mental worlds. He fights them by running, leaping, striking or using collectibles and his advanced psychic abilities.

Psychonauts is a great title for fans of science fiction and psychology. The game is colorful and offers players various platforming challenges that represent different psychological issues and place an overriding focus on topics like mental health.

Can you play Psychonauts on Mac?

There are no hacks required to play Psychonauts on a Mac. The game has official Mac OS version that can be downloaded and installed directly on the system.

Those who have Macs can get Psychonauts through Steam and install it directly on their machines to play.

To play Psychonauts on Mac, just download it from Steam and install it on your machine. If you own a Mac and want to play games that are Mac-supported, all you have to do is download and run the appropriate game client from the store that offers the game and use it to set up the game. Make sure your Mac meets the developer’s minimum system requirements for the game you want, in order to enjoy a smooth gaming experience.

How to play Psychonauts on Mac?

You can play Psychonauts on Mac if you install the native macOS version of the game.

How to play Psychonauts on Mac M1?

You can play Psychonauts on your Mac M1 after downloading the Mac OS version of the game from the Steam store. Then use the Steam client to install the game and run it. In this way, the game can be played locally without an active online connection, but it will take up space on your hard drive. For the best possible gaming experience, you should ensure that your Mac satisfies the game’s system requirements. The good news is that Psychonauts is not a very demanding game and should run smoothly.

Play Psychonauts on MacOS with Steam

How To Add Or Change Startup Apps On macOS

Tell Me Why (Mac)