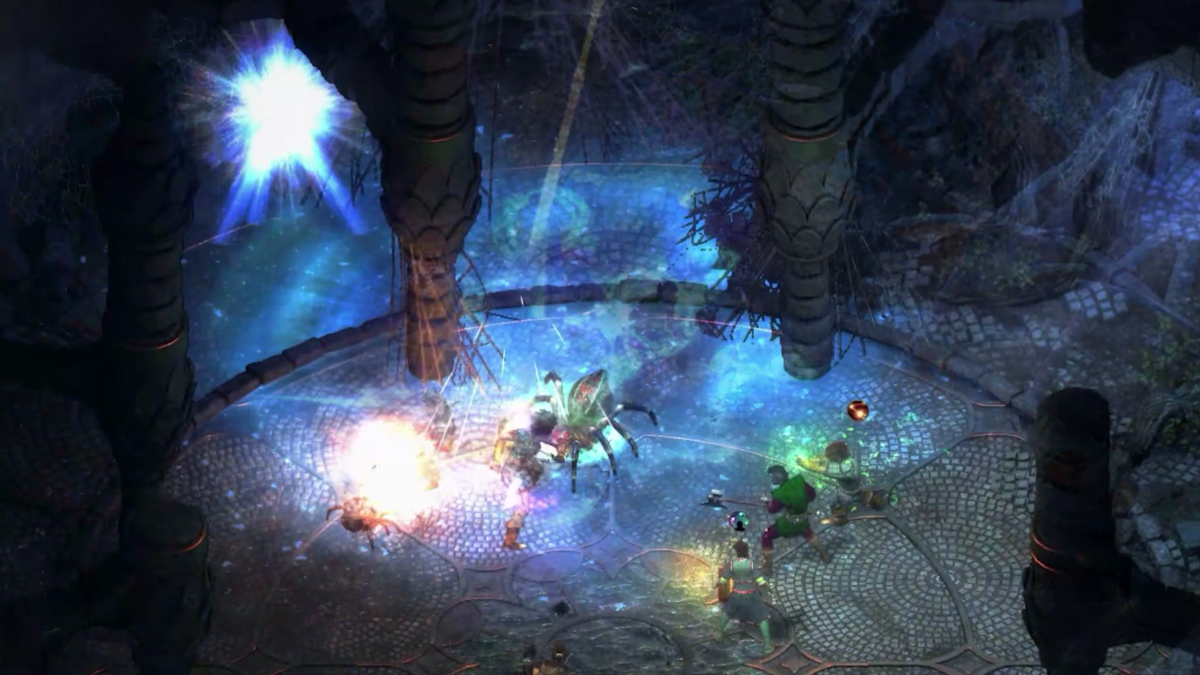 Pillars of Eternity on Mac

Pillars of Eternity is a role-playing game where the action unfolds in the fictional world of Eora. In this land, newborn babies are affected by a phenomenon called “hollowborn” (born without a soul). Only a “Watcher” with supernatural powers that allow him to communicate with the souls of others can deal with the hollowborn disaster and save the children.

Players take on the role of a male or female character, referred to simply as a “Watcher”. They can choose from one of the game’s six available races and eleven different classes and develop their character’s five core skills: stealth, athletics, lore, mechanics, and survival.

The gameplay is tactical and played in real-time. The view is isometric, with 3D characters set against pre-rendered 2D backgrounds.

Gaining experience points by completing quests is the primary means of progression.

Alongside the main story missions, players have the opportunity to take on side quests, each of which may have a number of different results.

As the player advances, he can assume control of a fortress that can be upgraded with new buildings and can serve as a de-facto hub.

Throughout the game, the player can interact with various non-playable characters through a list of dialogue options and make decisions that affect their behavior. For instance, a companion system allows them to invite optional supporting characters as companions on their quests. Furthermore, the players’ decisions can affect the final outcome of events in the game.

Pillars of Eternity’s combat system is built on the idea that every foe has unique defensive capabilities and resistance to certain weapons and spells. That’s why a key strategy to deal with the enemies in this game is to equip your character with a selection of different weapons and expand the number of spells you can use.

Players can explore the game world by making progress in the main story and unlocking new areas with different enemies to fight, items to find, and quests to complete.

The maps in the game are thoughtfully created. There is a lot of attention to detail put into the looks of the characters and their gear. The spell effects are graphically spectacular. The game’s music and sound design are balanced and immersive. The voice acting feels natural and devoid of overacting.

Pillars of Eternity is a classic isometric role-playing game with a focus on its story. Some players may find the game to be a bit text-intensive, but reading the boxes of information related to the plot keeps you engaged and lets you slowly uncover more about the culture, the religion, the people, the history, and the nature of Eora.

Can you play Pillars of Eternity on Mac?

There are no workarounds required to enjoy Pillars of Eternity on Mac. Mac players who are interested in playing the game can simply get the game’s official macOS version from Steam or Epic Games and install it on their systems.

If you’re looking to save some time and space on your hard drive, you can play Pillars of Eternity without downloading or installing it by using a reputable cloud gaming service like GeForce Now.

With a cloud gaming service, you can play Pillars of Eternity immediately after signing up for an account and a subscription, since there is no need to download or install any software.

If you have a Mac (powered by Intel or M1 processor), you can get the macOS version of Pillars of Eternity from Steam or Epic Games and play it on your machine natively. Just use your preferred game store account and gaming client, and then go through the game’s installation instructions to set it up. Naturally, you should check the developer’s recommended system requirements to make sure you can run Pillars of Eternity without any hiccups.

How to play Pillars of Eternity on Mac?

You can play Pillars of Eternity on Mac via cloud gaming options like GeForce Now, or if you install the native macOS version of the game.

How to play Pillars of Eternity on Mac M1?

Pillars of Eternity can be played on a Mac M1 natively or by cloud gaming. To a large extent, your gaming experience will depend on the speed of your internet connection if you choose to stream the game via cloud gaming services like GeForce Now. However, this option can save you some time and space by not having to download and install the game.

Of course, if you prefer to play Pillars of Eternity locally on your Mac M1, the Mac OS native download is available for purchase and installation through the Steam shop and through Epic Games. In this way, the game may be played locally without an active online connection, but will need storage space on your disk. For the best possible gaming experience, we recommend that you ensure that your Mac meets the recommended system specs.

Play Pillars of Eternity on MacOS with Steam

Play Pillars of Eternity on Mac with GeForce Now

You can play Pillars of Eternity on Mac (M1 and Intel models) with Geforce Now. Read our detailed guide.

How to Play Pillars of Eternity with Geforce Now
Mac How To, reviews