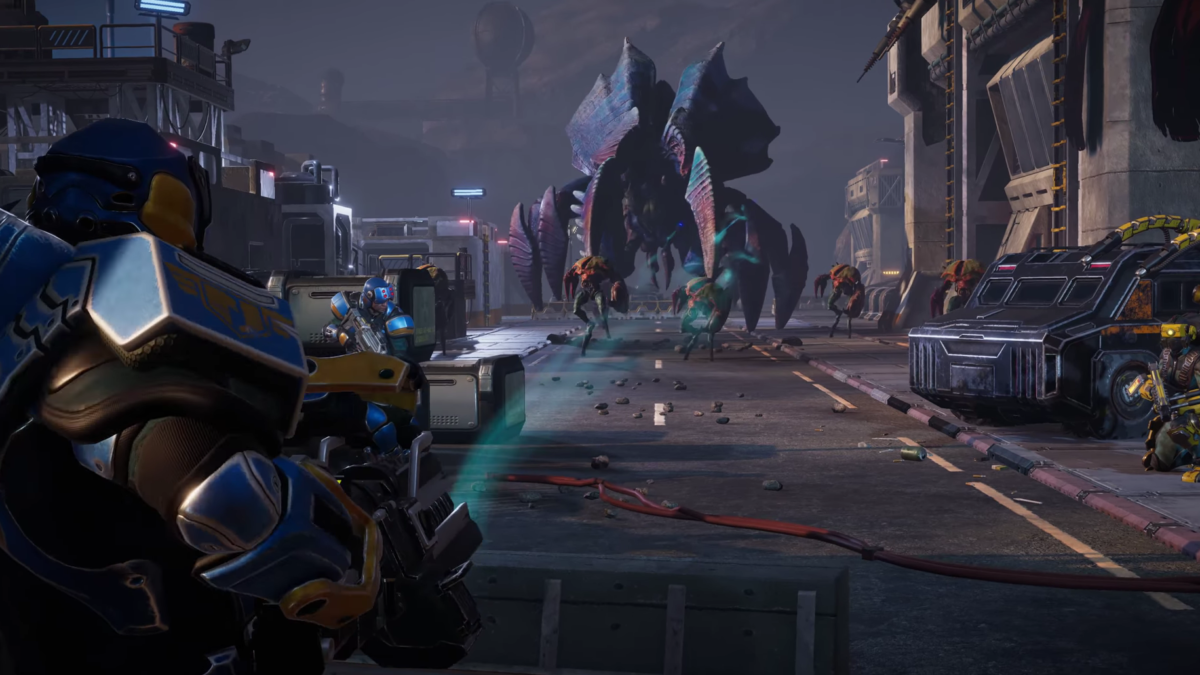 Phoenix Point is a turn-based tactical combat video game that is often described as a spiritual successor to the original X-COM. The game takes place in the year 2047 when Earth is in the middle of an extraterrestrial invasion. It features an open-world environment where strategic decisions are at the heart of the gameplay.

Players start by controlling a single base called Phoenix Point. Throughout the game, they must balance between building their base, researching technology and weapons, and developing diplomatic relations with other human factions.

At the same time, players have control over a group of soldiers which they can deploy to different locations and task them to explore, exploit or destroy various types of enemies.

The ultimate goal of the game is to prevent the alien menace from wiping out all of humanity. This is achieved by completing a series of different missions with specific objectives.

A user interface called Geoscape helps players keep track of their activity and make decisions regarding their strategy and their relationships with other factions.

Multiple AI-controlled human factions act according to their own interests on the game’s map. They compete with the player for resources and influence. The main factions are the Disciples of Anu, New Jericho, and Synedrion, and they have access to most of the world’s remaining resources, while the rest (collectively called Independent Havens) offer no loyalty to them and act independently.

Each of the three major factions has its own traits, ideologies, technologies, and diplomatic ties, as well as some secret information that can be used to end the extraterrestrial menace.

Players can decide to collaborate with the factions on expanding and improving their safe zones, acquiring resources and information, and gaining access to unique technologies through conquest or trade.

Furthermore, the game’s ending might vary depending on how the player decides to handle their interactions with these factions. For instance, they can attack them to acquire resources or take over their bases. They can also take advantage of their conflicts and alliances by participating in kidnapping, sabotaging, and assassinating.

Throughout the game, players can take part in a number of diplomatic activities, such as settling disagreements between factions, protecting Havens from invasions by aliens or rival factions, making alliances, and trading.

The main enemy is the aliens. They have their own unique characteristics and methods of attack. For instance, when attacking a base or a haven, they prioritize destroying the facility’s central life-support systems.

A special mutation system allows aliens to quickly evolve into more vicious forms in order to counter human strategy and technology. The mutations can give them new abilities to attack at close range or defend against certain types of weapons, used by the player’s soldiers. Boss aliens are among the game’s most difficult foes to encounter, as they require a combination of powerful weapons and new technology to defeat.

Combat missions pit players against different types of foes in turn-based encounters. A wide variety of weapons, such as flamethrowers, chemical weapons, and regular explosives, are available to soldiers before they go on combat operations. As they advance in the game, players can use drones as well.

Soldiers can get addicted to drugs, have permanent physical problems, or even go crazy because of what they go through in battle, thus, players have to look into new technologies to help them.

Can you play Phoenix Point on Mac?

Playing Phoenix Point on a Mac doesn’t need any workarounds. Mac users who want to play the game may do so easily by downloading and installing the macOS version from Steam or Epic Games.

To save time and storage space, you can play Phoenix Point without downloading or installing the game by using a trusted cloud gaming service, such as Boosteroid or GeForce Now. In this way, the game can be played instantly after signing up for an account and activating your subscription.

You can download the macOS version of Phoenix Point from Steam or Epic Games and play the game after installing it on your system. To install a macOS-supported game on a Mac, all you have to do is log in to your preferred online game store using and use its game client. In order to ensure that Phoenix Point runs well on your mac, don’t forget to check the developer’s minimal system requirements.

How to play Phoenix Point on Mac?

You can play Phoenix Point on Mac via cloud gaming options like Boosteroid or GeForce Now, or if you install the native macOS version of the game.

How to play Phoenix Point on Mac M1?

Phoenix Point can be played on a Mac M1 natively, after downloading and installing the game, or on a cloud platform. If you want to play through a cloud gaming service like Boosteroid or GeForce Now, your performance will be heavily reliant on the speed of your internet connection. This alternative, however, will eliminate the need of downloading and installing the game, saving you both time and storage space.

If you’d rather play Phoenix Point on your Mac M1, you can get the official Mac OS download from the Steam store or Epic Games. In this way, the game can be played locally without an active internet connection, but it will take up space on your disk. Also, be sure your Mac meets the system requirements of the game’s developer for an optimal gaming experience.

You can play Phoenix Point on Mac (M1 and Intel models) with Boosteroid. Read our detailed guide.

How to Play Phoenix Point with Boosteroid

You can play Phoenix Point on Mac (M1 and Intel models) with Geforce Now. Read our detailed guide.

How to Play Phoenix Point with Geforce Now
Mac How To, reviews