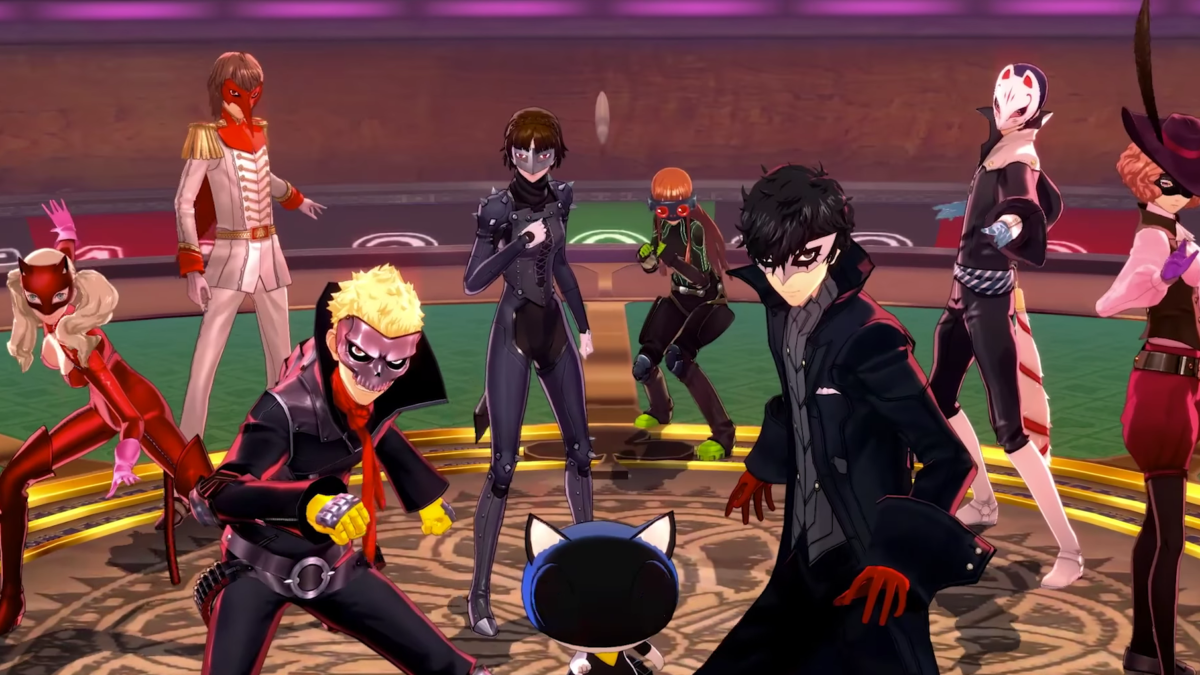 Persona 5 Royal is a role-playing game that combines dungeon crawling elements with social simulation scenarios. The game is an enhanced version of the sixth installment in the series, Persona 5, and features new content.

The player takes control of a high school student named Joker, who spends one year living and studying in contemporary Tokyo. A parallel world known as the Metaverse can be explored aside from the school- life events. It contains story-specific dungeons called “Palaces” and a randomly-generated multi-layered dungeon named Mementos. Both are home to Shadows, which are corporeal representations of mythological and religious characters’ repressed psyches.

Throughout the game, the player has the option of working part-time, engaging in hobbies, or creating weapons for combat. These activities improve character traits and add effects that can be used in battles.

The main character may form relationships with other characters known as “confidants”. The more confidants the player has, the more fighting abilities he can unlock.

The game has a turn-based combat system, just like the earlier games in the series. Battles can start when the characters encounter an enemy, or they can create an ambush and start a surprise attack to gain the upper hand. The general behavior of the characters in the game is dictated by a day-night cycle and a weather system.

Melee and ranged weapons can be used in fights. Players also have access to magic . Personas (expressions of the inner selves of the main character), can be summoned for special attacks. Negotiation can be used by players to persuade a chosen Shadow to join their cause and create a new Persona.

Similar to earlier editions, the game ends if the main character dies. Players have the option to see what others are doing at any given moment, much like the “Vox Populi” system from Persona 4 Golden.

The enhanced version of the game includes new characters. Players can explore a new Palace and a new district of the city (Kichijji) along with other improvements.

Can you play Persona 5 Royal on Mac?

Despite the lack of official Mac compatibility for the game, you can still play  Persona 5 Royal on a Mac. The fastest option for playing games that are not Mac-native is by using a cloud gaming service. Persona 5 Royal has just recently been released in the Boosteroid cloud gaming platform and if you can’t wait to play the game, you can subscribe and run it right away. Another solution we recommend, if you want to play Persona 5 Royal on a Mac locally, is to install Windows using Parallels or Bootcamp Assistant. By using these tools, you can use a Mac as if it were a Windows computer and run Windows software and games on it.

To download and play Persona 5 Royal on Mac, you first need to create a Windows environment with the help of specialized software. Those of you who own Macs with Intel CPUs can install Windows using Boot Camp Assistant or Parallels and play  Persona 5 Royal in the Windows-emulated environment. Those using Macs with M1 chips can use only Parallels for the same task because Boot Camp is not compatible with the M1 chip. This approach has the drawback of requiring additional software to set up a separate Windows partition on the disk or create a virtual machine. However, at the time of this writing, this is a workaround that will help you play  Persona 5 Royal on Mac in a matter of minutes.

How to play Persona 5 Royal on Mac

You can play Persona 5 Royal on Mac in two ways. The quickest is to sign up for a Boosteroid account and subscribe to their cloud gaming service. The other option is to install Windows on your Mac via Parallels or Boot Camp Assistant.

How to play Persona 5 Royal on Mac M1

Persona 5 Royal can be played on the Mac M1 with Boosteroid cloud gaming or after the installation of a Windows virtual machine on your Mac. We recommend Parallels for that task because, with it, setting up and running Windows inside of your Mac M1 only requires a few clicks.

A separate Windows partition can be made on your Mac with the help of Boot Camp Assistant. This is another useful program, but it won’t work on Macs with M1 processors due to incompatibility with the M1 chips.

You can play Persona 5 Royal on Mac (M1 and Intel models) with Boosteroid. Read our detailed guide.

How to Play Persona 5 Royal with Boosteroid

You can play Persona 5 Royal on Mac (M1 and Intel models) by installing Windows on your Mac with Parallels. Read our detailed guide.

How to Play Persona 5 Royal with Parallels

You can play Persona 5 Royal on Mac (Intel models only) by installing Windows on your Mac with Boot Camp Assistant. Read our detailed guide.

How to Play Persona 5 Royal with Boot Camp
Mac How To, reviews

New Tales from The Borderlands (Mac)