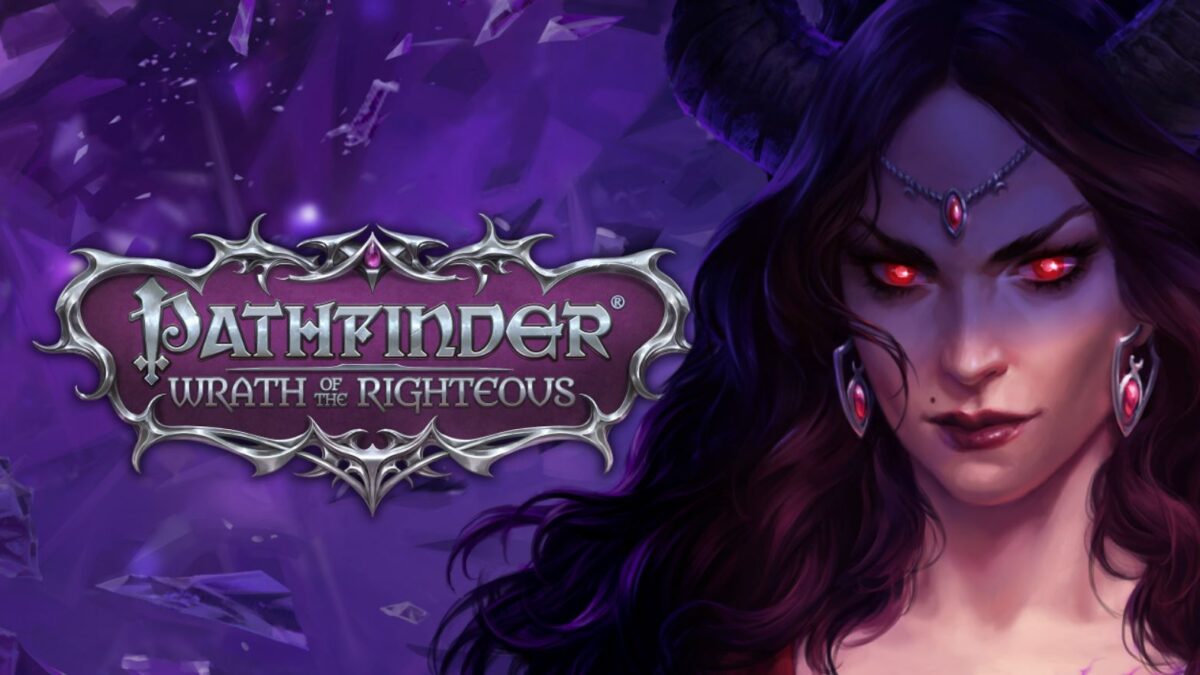 Pathfinder: Wrath of the Righteous on Mac

Pathfinder: Wrath of the Righteous is a massive single-player RPG game in a gaming genre that’s already known for its scale and lengthy campaigns. It’s the successor to the highly-successful Pathfinder: Kingmaker RPG, and it attempts to provide an even deeper, more immersive, and technically better role-playing gaming experience. How well it manages to do that will be the focus of the next few paragraphs. However, if you are solely interested in learning how to play this game on your Mac (it’s really easy), feel free to skip ahead to our instructions section, where we show three methods of playing Pathfinder: Wrath of the Righteous on Mac.

As we said, Pathfinder: Wrath of the Righteous is a turn-based RPG game. It has the same developer as its predecessor – Owlcat Games – and, naturally, shares a lot of similarities with Pathfinder: Kingmaker. From a very long and story-rich campaign, and its Dungeons & Dragons-inspired aesthetic, to its very in-depth character-progression mechanics and huge catalog of character abilities and skills. If you’ve played other RPG games, such as Baldur’s Gate 3 or Divinity: Original Sin (1 and 2), this game should feel familiar. It hits a lot of the same beats as other popular RPG games, while also managing to introduce some new ideas, both in its gameplay and its story. It must be noted that this isn’t a game for everyone, but so is the RPG genre in general. Pathfinder: Wrath of the Righteous requires the player to spend a lot of time with the game, slowly learning about its many in-depth mechanics while steadily progressing through the lengthy campaign. In other words, this is not a game that’s fit for a quick half-an-hour session during your lunch break. Instead, it demands that you free up some of your time and immerse yourself in it, which, obviously, isn’t what everyone is looking for in a game.

Although this is another game in the Pathfinder series, the story and setting of Wrath of the Righteous aren’t connected to the games that have come before it. At most, you may come across some Easter Eggs from the previous Pathfinder games, but you don’t need to have played them in order to understand the story of Wrath.

The story of Wrath of the Righteous is set during a war between the nation of Mendev and an invading demonic army that is able to cross into the mortal world thanks to a magical portal called the Worldwound. The armies of the living have begun to lose ground against the demonic invaders when the player’s adventure begins. You create a custom character and start the game as a survivor of a demon attack on the city of Kenabres, the main character’s home city. After the attack, the protagonist finds out that they possess special powers that allow them to fight back the demons. After this realization, the protagonist is recruited as the commander of a Crusade against the demons, and so you get to control both the main character as well as lead a demon-fighting army.

At first glance, and in the first couple of dozen hours of gameplay, the story and setting may indeed feel generic, yet, towards the middle and during the second half of the game, everything starts to become more nuanced, as your character is faced with difficult choices that make the player explore their own morality and values – a welcome and necessary aspect in any RPG game. Of course, fantasy tropes and clichés are everywhere in the Pathfinder games, including this one, but we believe that both the setting and the story in Wrath have managed to partially break away from some boring genre conventions, providing a perspective that becomes more interesting and nuanced as the story progresses.

Maybe the best part of the Wrath of the Righteous gameplay is that it’s turn-based. Many RPGs in recent years, including Pathfinder: Kingmaker, have tried to make the clunky “real-time combat with pause” system work, and most of them have not been particularly successful. Wrath does away with the real-time system and embraces turn-based combat, which is much more fitting for an RPG of this type. This allows the player to spend all the time they need reading through ability and item descriptions, stats, rules, and more, to figure out which action would be best in a given situation. Admittedly, this makes this already long game even longer, but it’s definitely the right call (at least in our opinion).

Wrath also introduces a turn-based strategy gameplay mode, where you control your crusader army and attempt to defeat opposing demon armies. This mode is very similar to the gameplay in the Heroes of Might and Magic games, but, unfortunately, it’s rather bland and plain. In all honesty, the game would have been better without it. The same thing can be said about the Crusade-management mode, which is like a very stripped-down, bare-bones version of a 4X turn-based strategy. It feels like it’s there as an afterthought to add more content to the game, rather than an actual, well-thought-out gameplay mechanic, and while it isn’t terrible, it’s definitely one of the weaker aspects of the gameplay.

Aside from those two throwaway modes, the main aspect of the gameplay, with the turn-based combat and the incredibly deep character progression is top-notch. Speaking of character progression, you get to develop your character in multiple different classes, rather than be forced to go down a single progression path. This also ties well into the story, as the choices you make in the game reflect on the class paths of your character. In the second half of the game, you even get to choose a Mythic path, that allows your character to become a lot more powerful, and opens up a whole array of new end-game abilities.

Overall, the gameplay in Wrath of the Righteous is solid, and it improves upon its predecessors in nearly every aspect, which is more than enough to recommend this game.

Pathfinder: Wrath of the Exile is a game mainly geared towards hardcore fans of the RPG genre, who have the time and patience to sink tens or even hundreds of hours while exploring the vast world, story, and gameplay mechanics of this game. For these types of players, Wrath is an easy recommendation. However, for players who prefer shorter, more streamlined experiences, there are plenty of other RPG games out there, that aren’t as demanding and would be a better fit for more casual RPG fans.

Can you play Pathfinder: Wrath of the Righteous on Mac?

The good news for Mac users eager to try Pathfinder: Wrath of the Righteous on their Mac computers is that the game has an official macOS version that runs well on both Intel and M1 Macs. If you want to play the game, you can easily download it from Steam or from Epic Games Store, depending on where you’ve purchased it.

Furthermore, there’s also a third option to play this game on your Mac. Since Pathfinder: Wrath of the Righteous is also available in the games’ library of the GeForce Now cloud gaming service, you can stream the game to your Mac without needing to download it. This option should allow owners of older Macs, that may struggle to run the game natively, to still play it with good performance, so long as their Internet connection is fast and stable.

Read the lines below if you want to learn more about the different methods of playing this game on your Mac.

How to play Pathfinder: Wrath of the Righteous on Mac

When a given game has a version for macOS, it’s super easy to install it and start playing it on a Mac computer. All you’d need to do is get the respective gaming store client and use it to download and install the game. In the case of Pathfinder: Wrath of the Righteous, the game has Mac versions in both Steam and Epic Games Store, so you can get it from either gaming store, and you will be able to play it on your Mac. Further down, we’ve shown the specific steps for each variant.

However, it’s also possible to play Pathfinder: Wrath of the Righteous on your Mac without even downloading it, which is perfect for Mac users who don’t have enough storage space (the game requires around 50 GB of storage) or whose Mac isn’t very powerful and may not be able to run the game with decent performance. The way you can do this is by using cloud gaming services such as Boosteroid or GeForce Now, which allows you to play games by streaming them to your Mac over the Internet, rather than having them downloaded on the computer. Here are two brief guides on how to use the two aforementioned services.

To play Pathfinder: Wrath of the Righteous with Cloud Gaming:

First, you will need to purchase the game. Limited time offer on CD.Keys.com for a discount – 61 % Pathfinder: Wrath of the Righteous for $ 21.19

Now you will need to register for Boosteroid. This allows you to add Pathfinder: Wrath of the Righteous to their Cloud Gaming Library. Once uploaded you can seamlessly play the game from your Mac, TV, or Mobile Device.

Play Pathfinder: Wrath of the Righteous

Play Pathfinder: Wrath of the Righteous on Mac with Boosteroid

For a detailed guide on setting up and using GeForce Now, go here.

How to download Pathfinder: Wrath of the Righteous on Mac

If your Mac meets the game’s system requirements (see below) and you have enough free space on your Mac, you can easily download Pathfinder: Wrath of the Righteous on your Mac to play it natively. Below, we will show you how to download the game from Steam and from Epic Games Store, so choose which store you want to purchase it from, and then follow the respective instructions.

Downloading Pathfinder: Wrath of the Righteous on Mac from Steam:

Downloading Pathfinder: Wrath of the Righteous on Mac from Epic Games Store

Pathfinder: Wrath of the Righteous on Mac M1

While many programs that can run natively on Intel-based Macs do not have official versions for M1 Mac systems, Apple has made sure to provide its M1 Mac users with an easy way to seamlessly run such programs on their computers without the need to resort to any complex workaround methods. The solution Apple has come up with is called Rosetta 2, and it is an emulation tool that you will be prompted to install the first time you attempt to run an Intel Mac app on your M1 Mac. Simply agree to the installation and once Rosetta 2 installs (it takes only a few moments), the tool will automatically get activated any time you start a piece of software designed for Intel Macs that doesn’t have a native M1 Mac version.

In addition to this method, do not forget that you can also play Pathfinder: Wrath of the Righteous on your Mac using GeForce Now if you prefer to save some storage space on your computer by not downloading the game and streaming it instead.

This operation can fail if the version of the OS on the device is incompatible with the installed version of Xcode.