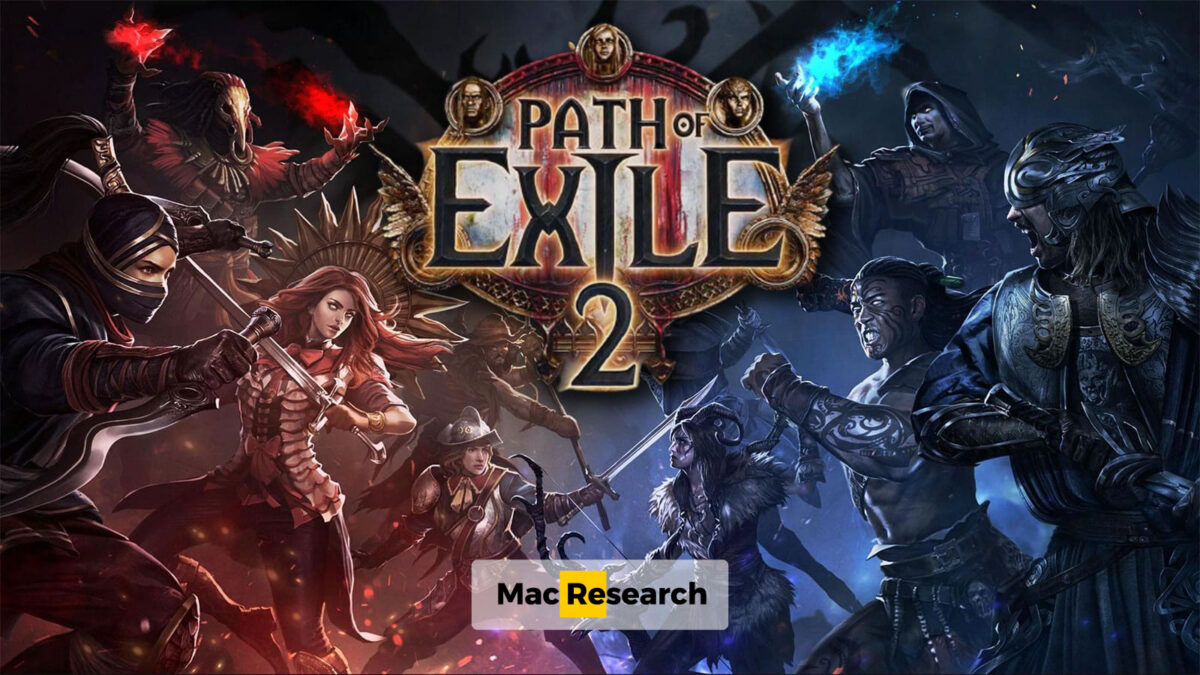 How to play Path of Exile on Mac

Can you play Path of Exile on Mac?

If you want to play Path of Exile on Mac, you can download the macOS version game installer and follow the on-screen instructions.

Because of its ever-changing content, yearly leagues, and deep character customization options, PoE can easily take its place next to some of the best games action RPG to play. Fans of the genre love this game because it has everything they need to be crazy about it. Besides, there are no money gates in PoE. Every new expansion, league, and patch that the developers make is free for everyone to use, no matter what.

About Path of Exile on Mac

Path of Exile (PoE) is a free-action Role Play Game developed and released by Grinding Gear Games in 2013. Over the years, the game has evolved into one of the most complicated slasher RPGs in the world. It has been around for several years now, which means that there is tons of content to enjoy and a lot of different mechanics.

Starting over isn’t that hard. To start, you have to choose an “Exile”. You can choose from Duelist, Witch, Ranger, Templar, Marauder, Shadow, or Scion, and then click to dive into the Path of Exile’s world.

Skill three starts out in a different way for each character. There are different stats and bonuses that each character has access to from the start. You can go through the passive skill tree as many times as you want. In addition, there is the possibility of getting an “Ascendancy,” which is a mid-game character specialization. It also means that you can make your character as unique as you want to make it.

In the game, things are always evolving and you’ll hardly get bored as there is a launch of a new “League” every three, six, or twelve months where developers drop fresh content. Take into account that each League adds new skills and balance changes, as well as new loot.

So the game basically feels as new every time. Even if you’ve unlocked every single class and weapon, every piece of armor, or every single task that can be completed, Leagues give you new things to do. This, along with the Path of Exile’s passive skill tree and gem system, makes the game a lot of fun to play again and again.

When you play Path of Exile, your skills and abilities are linked to skill gems that fit into your gear. These gems make your gear more powerful.

Skill gems can be put in everything from your helmet to your shoe to get new abilities. There are hundreds of these gems to choose from, and you can put them in any place where you want. Activated and Support gems are the two types of skill gems. When you get an active skill gem, you get to use that skill. You can also get support skill gems to make your character even better or stronger.

Support skills gems often change the way an active skill works, making it more powerful at the cost of requiring more mana. There are certain combinations of active and support gems. As well as skill gems, Path of Exile has a passive skill tree that gives you more stats and attributes as you level up. This is in addition to the skill gems.

It can be exciting for people who start playing Path of Exile to choose what to do because there are so many things to do. First, you have “Maps.” These are the main type of content in Path of Exile’s endgame. When these are put inside of a map device, the map is used to make a new, randomized game world with lots of monsters and a boss fight.

If you want to improve a map’s quality with a Cartographer’s Chisel, you’ll need to learn how to use it. Only after you finish the 10th Act do you get to use maps. When you do the Epilogue quest “Picking Up the Pieces”, you get a map device in your hideout that you can use. There are over a hundred base maps and nearly 30 unique maps available in the game currently.

Then, there is “Delve” – a word that refers to the exploration of an infinite Azurite Mine Dungeon. When you meet Niko, the Master of the Depths in Act 4, you can start delving. You drive a crawler (minecart) that is powered by Sulphite through the mine. You find new checkpoints and routes through the mine as you go. Exploring gives you hidden loot and allows you to get to places that were previously closed off.

“Labyrinth” is a dungeon crawler that is made up of all kinds of things, from traps and puzzles to monsters and loot. It’s a lot of fun to play. Izaro is the last boss in the Labyrinth. When you defeat him and finish the Labyrinth, you get the Ascendancy subclass for your character and the Ascendancy skill tree. If you join the competitive leaderboards, you get unique equipment and enchantments, as well as a place on the list of the best players from all over the League.

The dark fantasy setting is interesting and engaging both, to play it solo or with friends. Playing as an “Exile”, you’ll be fighting demons with fire, swords, and other weapons.

Acts have about six quests each. With a wide range of character and skill customization options, crafting systems, and a lot of loot, you should be able to play alone for at least 100 hours.

If you are looking for more shared fun, you can join a co-op. In this game, you can play the whole story with up to four friends. That’s the best part. You can also enter specific maps with other members of your team. Enemies are going to get more challenging, as the number of people you have on your team grows.

There are PvP tournament seasons, battles, and Capture the Flag events all over the world. Race Evens and Daily Leagues are running in separate game worlds. These features come with their ladders, economies, and prizes of their own.

Another co-op feature is that you can unlock and change the look of your hideout. If you pass specific missions, your exile gets a special location that serves as the hub for crafting gear and testing skills. It also serves as a place to keep your money and collect loot. You can invite other people to your hideout so they can talk, trade, and play in the end-game.

As a community, the Path of Exile players are very serious but also have a lot of fun. There are plenty of community-made written articles, blog posts, and videos about how to play the game and get the best tweaks and tricks.

How to play Path of Exile on Mac

Path of Exile is available on a couple of cloud-gaming platforms, and it also has an official macOS version that can be downloaded from Steam, so there’s no shortage of ways to play this game on a Mac. Here, we will tell you about three of those ways – the ones we deem the most convenient and straightforward. Just make sure that you have a Steam account before you try any of the methods shown below, as you will need to be registered on Steam to play the game.

Even though this game isn’t very new, being released back in 2013, it isn’t exactly lightweight, and it does require some hardware power to run with a decent performance, especially if you want to use its medium or high settings. It’s also not the smallest game (around 40 GB when installed), so that’s another factor that users with limited drive space should consider. Both of these factors, however, can be fully ignored if you play the game through a cloud-gaming. If you use a cloud-gaming service to play Path of Exile, the game won’t need to be installed on your Mac, and it won’t matter if your Mac doesn’t meet some of the game’s requirements (provided that it meets the requirements for the cloud-gaming platform you’ve chosen to use). Below, we will explain to you how to use two such cloud-gaming services – Boosteroid and GeForce Now – to play Path of Exile on your Mac.

Path of Exile Set Up Methods

Path of Exile with Cloud Gaming

Step 1. Get Path of Exile

Before playing Path of Exile make sure you get the game through the official websites. For the moment only Steam is compatible with cloud gaming services such as Boosteriod and Geforce Now. If you have an older Mac and are looking for a performance upgrade you can proceed to step 2.

All you need to do now is register for Boosteroid. This allows you to add Path of Exile to their Cloud Gaming Library. Once uploaded you can seamlessly play the game from your Mac, TV, or Mobile Device.

When Registered you will have additional access to more top-rated games for free. Pricing varies depending on the subscription plan.

Play Path of Exile with Boosteroid

Note: Boosteroid works with the majority of browsers, but the ones that the platforms’ creators recommend are Opera and Google Chrome, so use them if you are having any issues when using Boosteroid through another browser.

For more details on using the GeForce Now service, visit the next link to our detailed How to use GeForce Now on Mac.

Since 2020, after major code refactoring, Path of Exile has become officially available for macOS. This means that any Mac user whose computer meets the system requirements of the game can download, install, and play Path of Exile without the need for the employment of any complex workaround methods.

If you have a Mac that meets the system requirements for Path of Exile and you want to download the game to play it, here’s how to quickly do this:

Path of Exile on Mac M1

Path of Exile can be played on Mac M1 computers through the game’s macOS version. To play Path of Exile on Mac M1, you need to install Rosetta – your Mac will automatically prompt you to install Rosetta the first time you start the game. Rosetta is a helper app that allows Mac apps designed for Intel Macs to also work with M1 Macs. The macOS version of Path of Exile is one such app that needs Rosetta to run on an M1 Mac computer. Installing Rosetta is very easy, simply launch the game and when your macOS detects that it needs Rosetta to run it, it will give you the option to install it. Just click Install and after the installation completes, you will be able to launch Path of Exile on your M1 Mac. Rosetta works automatically, so there’s no need to manually start it beforehand. Instructions on how to download Path of Exile on Mac are available above.

How to play Team Fortress 2 on Mac