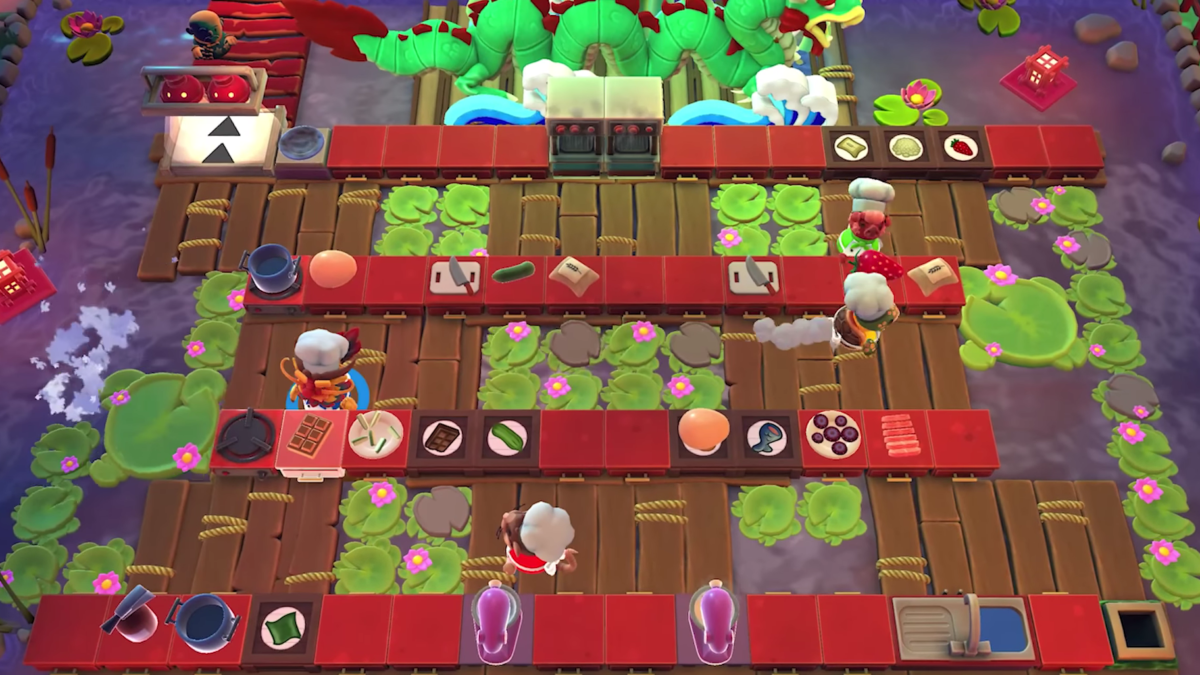 Overcooked 2 is a cooking simulation video game, released as a sequel to the Overcooked game from 2016. The title has many of the same fun and engaging gameplay elements as its predecessor, but it offers more challenges to the players and is packed with new content and features. Additionally, unlike the first game, which has only local co-op, Overcooked 2 offers online co-op and makes playing with friends and strangers from near and far a breeze.

If you have a Mac and want to play Overcooked 2 on it, you can do that in two easy ways. The game has official macOS support and can be downloaded and installed directly on your Mac. While some people may prefer this method as the standard way to play games on a Mac, however, there is a quicker option that doesn’t require downloading and installing anything.

What we are referring to is cloud gaming with Boosteroid or GeForce Now. These two platforms have Overcooked 2 in their game libraries and support it for streaming in your browser. What is more, you can load and play the game on any Mac, including the models with an M1 chip without having to worry about system space and meeting the game requirements.

Before you scroll down to the instructions below, however, let’s see what Overcooked 2 has to offer and why would you want to play it in the first place.

In the game, up to four players work together to cook meal orders at various restaurants. The gameplay mechanics include chopping products, preparing them, putting them on plates, serving them, and cleaning up afterward.

There is a strategy element that involves having to coordinate the time needed to prepare the meal orders and trying to work in tandem with your teammates without running into each other’s characters.

New interactive levels, restaurant themes, chef costumes, and recipes expand upon the original game’s features. During some of the levels, players have to switch between recipes and different settings and adapt on the fly. For instance, they could start off making salads in a hot air balloon and end up making sushi in a sushi kitchen.

An ingredient-throwing feature spices up the gameplay by allowing players to throw ingredients to another chef from a distance. This is one of the most significant changes in Overcooked 2 compared to its predecessor. Fans of the original game will notice that the need for going back and forth has been simplified by the ability to hurl food straight into burners, cutting boards, or the hands of co-players. This ability to throw ingredients also proves to be a valuable way of speeding up the cooking process and increasing the number of meal orders completed. However, only raw ingredients can be thrown, so there is still a considerable amount of rushing until the final plating of the dishes.

The kitchens in the original game give players a great deal of challenge, but the ones in the sequel are even more unusual and full of unpredictable events that make it difficult to cook. Everywhere you look, there are flames that are randomly breaking out for no apparent reason, gusts of wind that are whipping through the air, platforms that are moving on their own, and whole sections of kitchens that vanish right in front of your eyes. These new kitchen features put your reflexes to the test in a manner that makes certain levels feel really extreme.

There are moving floors that can push you in the wrong direction, and the fact that some of them are hanging over the sinks and stoves just adds to the anxiety of stepping on them.

To make things even harder, you can’t go to all the places in the kitchen you need to without using magical portals. These portals are special features that transport players or ingredients to parts of the kitchen that are otherwise inaccessible. However, they can change their location, so you have to be careful not to fall off the map when using them.

The strange kitchen layouts require a lot of teamwork on their own, and some levels require three or four chefs working together to get through.

The sequel to Overcooked challenges players with nine different recipes, some of which are brand new. In some levels, there is an additional mixing phase in between the chopping and cooking stages. After everything is combined, players need to heat it on the appropriate burner, whether it is a frying pan, an oven, or the newly introduced wooden steamer. Mastering the extra kitchen tools and steps for making the meals makes the game more fun and stressful, which often leads to hilariously chaotic situations.

In terms of graphics and design, the game looks colorful and pleasing to the eye. The visuals aren’t mind-blowing, but they’re certainly of good quality. What’s more, it’s simple to identify each ingredient, which plays a role in the recipes.

Overcooked 2 is a fun game that can be complimented for its fast-paced action, dynamic levels, and the balance it strikes between comical moments and strategy. The game is a worthy sequel to the original and calls for good management of your time, cooperation with teammates, and mastering the preparation of various dishes in a constantly changing environment. If you want to give this game a try on your Mac, check out the ways to play it below.

Can you play Overcooked 2 on Mac?

Overcooked 2 can be played on Mac because the game has an officially supported version for MacOS. If you don’t want to download and install the game, though, you can play Overcooked 2 on a Mac by using cloud gaming services like Boosteroid or GeForce Now.

Overcooked 2 can be directly downloaded on a Mac and installed on it. As soon as you purchase the game, simply follow the setup instructions, so you can play Overcooked 2 on your Mac and enjoy it to the fullest.

How to Play Overcooked 2 on Mac

You can play Overcooked 2 on Mac via cloud gaming options like Boosteroid and Geforce Now or you can download and install it on your Mac by purchasing it from a trusted gaming store.

First, however, you will need to buy the game.

How to play Overcooked 2 on Mac M1

To play Overcooked 2 on a Mac M1 you can subscribe to a cloud gaming service like Boosteroid or GeForce Now and stream it in your browser without the need for any complex installation. Another way to play is to simply download the game from a trusted game store and use its game client to install it on your Mac. The game has a macOS supported version, so the installation should be a breeze.

Play Overcooked 2 on Mac with Boosteroid

You can play Overcooked 2 on Mac (M1 and Intel models) with Boosteroid. Read our detailed guide.

How to Play Overcooked 2 with Boosteroid

You can play Overcooked 2 on Mac (M1 and Intel models) with Geforce Now. Read our detailed guide.

How to Play Overcooked 2 with Geforce Now

Play Overcooked 2 on MacOS with Steam