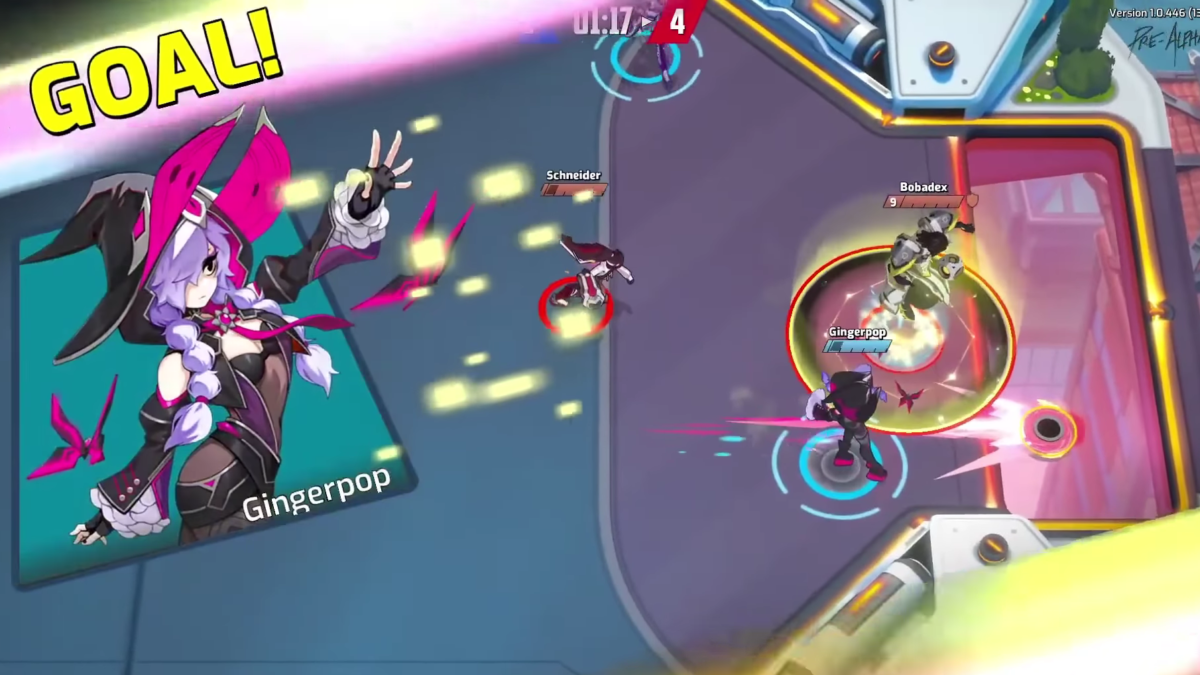 Omega Strikers is a free online multiplayer competitive game released in 2022. The gameplay consists of quick online matches in which players, divided into two teams, try to outscore one another.

Each team has three players who compete by sending a giant hockey puck, known as a Core, into the other team’s net. Matches are fast and intense – the first team to get five goals wins, and you must secure a two-points differential to secure a victory. The playfield is visible from a top-down perspective and allows for a full view of everything that is happening on the screen.

The playable characters in the game are known as strikers. There is a limited but refreshing cast to select from. You can create a team with a funny-looking witch, a young girl dressed up in a space costume, a gigantic friendly bear, or a shirtless man who blasts fire out of his hands. Two forwards and a goaltender are assigned to each team.

In addition to being able to attack other players during the match, each striker also possesses special skills that may be used to move the Core around the playfield. Completing missions often rewards players with in-game cash, which can be used to unlock new characters and skills. Taking damage causes a rise in a character’s stagger bar, making them easier to knock back and even throw off the field for a limited period of time.

Scoring goals, making saves and knocking out players from the opposing team add experience points to a striker’s skillset, allowing them to become stronger over the course of a match.

What adds fun to the gameplay is the way the strikers stand out visually. Each character is designed in such a way that you can easily tell their role in the game.

For instance, a striker who prioritizes defense would have a large shield and helmet, as well as a tall, broad-shouldered frame. A divebombing brawler wears a dazzling leather vest that does nothing to hide his many wounds from fights.

A match only lasts a few minutes, and it’s hard to ever get too upset since things happen so quickly that there isn’t enough time to become emotionally invested in each match.

After you start to play, be prepared to roll off a few losses. However, once you get used to it, the real fun begins. As you go deeper into the meta, the game becomes much more complex. Players who gain speed and strength through a leveling system swarm back and forth, trying to attack the opposing players and score. In this way, they try to gain “control” of the field.

The game is designed in an anime style and accompanied by upbeat music. There are a number of powerful visual effects that are well-presented and enjoyable to watch.  After each goal, the camera zooms in onto the goalscorer and an MVP-style song plays out.

The game’s camera angle makes for a pleasant watching experience. The camera doesn’t need to jump around like in many sports titles because the entire game is presented from a top-down perspective. That makes it easy for viewers to follow along and ensures that they won’t miss a moment just because the camera moved.

The bright characters and straightforward gameplay of Omega Strikers immediately grab your attention, but the game’s real brilliance lies in the unique way everyone plays. The character you choose has a significant impact on the way you interact with other players and the emphasis you place on winning.

If you’re looking for a fun way to spend some time, Omega Strikers is the perfect game to give you a few rounds of quick matches. But keep in mind that, before you know it, you’ll find yourself playing for several hours straight.

Can you play Omega Strikers on Mac?

Omega Strikers can be played on a Mac with the help of the Boosteroid cloud gaming service. Alternatively, if you have a Mac and want to play Windows games like Omega Strikers, you may install Windows using a program like Parallels or Boot Camp.

Regrettably, Omega Strikers isn’t Mac-compatible, therefore you can’t play it on your computer without some workarounds. Even though the game isn’t officially supported on your Mac though, you may still be able to play Omega Strikers by streaming it or installing Windows and running it there. In the next paragraphs, we’ll explain those methods in-depth and demonstrate how to put them to work.

How to play Omega Strikers on Mac

You can play Omega Strikers on your Mac quickly and easily using a cloud gaming service, such as Boosteroid. Omega Strikers may be downloaded and played locally if you have Windows installed on your Mac through Parallels or Boot Camp.

How to get Omega Strikers on Mac

To get Omega Strikers on Mac, first, go to Steam and purchase the game. Then, you can stream the game to your Mac with Boosteroid or download it after installing Windows with Parallels or Boot Camp Assistant.

Once Omega Strikers is in your Steam Library, you can get a Boosteroid subscription and use the platform to stream this game to your Mac, Apple TV, or iOS device.

You can start playing Omega Strikers on your Mac immediately after signing up for the Boosteroid service and activating your subscription from your account settings.

Boosteroid is a great way to play games that have no official support on Mac. The service is easy to use and all you need is a subscription and ownership of the game you want to play. After that, you just load up your web browser, go to Boosteroid’s website, search for the game and click to play. The process may be summarized as follows:

Omega Strikers cannot be played on a Mac unless Windows is already installed, either in a virtual environment or on a hard disk. Fortunately, even if the game is not officially supported, there are two workarounds that can help you to play it on your Mac.

One of the methods is to install Parallels for Mac so you may use your Mac as a virtual machine to run Windows 10 or Windows 11. Macs running on Apple’s Silicon processors and those running on Intel chips should be able to run this program without an issue.

The steps necessary to play Omega Strikers using the Boosteroid cloud gaming service have been outlined above. We’ll now demonstrate how to run the game locally on your Mac using Parallels. This guide will show you how to set up a Parallels virtual machine for gaming with all the settings you’ll need. If you’d want a brief version of that guide, you may use the instructions down below:

The first step in playing Omega Strikers on an Intel Mac is to run the Boot Camp Assistant and install Windows from an ISO file. Then, boot up Boot Camp’s Windows partition and download the game.

Intel Mac users may play Windows games, but only after they spend a considerable amount of time installing Windows using Boot Camp. If you have an M1 Mac, you can try using Boosteroid or Parallels for gaming.

A detailed guide on installing Windows through the Boot Camp app can be found in the link. In case you need a brief overview of the instructions, you can find them below:

After completing these steps, you’ll be able to use your Mac to play Windows games as if you are playing them on a Windows PC.