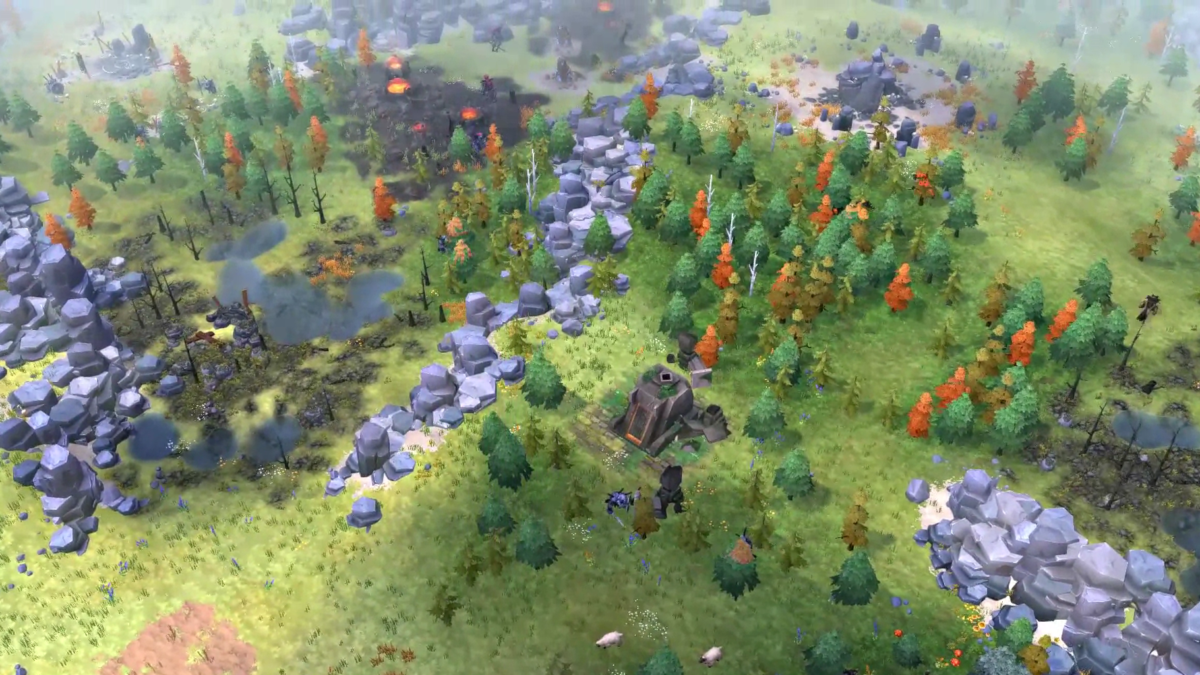 Northgard is a real-time strategy game in which a Viking’s clan attempts to take over a wild continent. The game has a series of challenges and tasks with increasing difficulty, both in a single-player and multiplayer game mode.

Northgard is a new land found by the heroic Vikings that is full with mysteries, peril, and wealth. Only the most daring of the Northmen have set ship to this new land, where deadly wolves and undead warriors are wandering, in search of glory for their Clan and a place in history.

The story in Northgard is about a prince who wants revenge for his father’s murder at the hands of Hagen, the chief of Clan of the Raven, who is merciless and cold-blooded. During his journey to the island of Northgard, the young prince (called Rig) will encounter various clans and deadly animals, and accomplish his mission. Players play as Rig and slowly reveal the full story of the character as they complete the challenges and missions that are thrown at them during the journey.

In the start of the game, there are 13 clans to select from, seven of which are available as DLCs. As an example, the Fenrir Clan is known for its aggressive style of play, which comes with benefits and advantages geared on growing military power in order to win through Domination. Huginn and Muninn, on the other hand, are more focused on trade and gaining Kröwns (in-game’s currency).

With a variety of playstyles, based on the specifics of each clan, the game provides a number of methods to approach each combat. There are also many Map customization settings, including type and size of the map, AI players, obstacles and victory conditions that can be altered.

You begin with just a few villagers and a ramshackle town, and you work your way up to a large, well-defended town that can withstand attacks from both vicious creatures and other Vikings. All this is done by finding and putting the available resources into good use with the help of specialized workers and structures.

Building slots restrict the amount of construction that can be done. There are just a few structures on the map, and each one must be colonized before it can be used. The map is divided into regions, each of which contains resources, treasure, and enemies. You need to plan out your growth in advance, taking into account the effect on your stockpiles, since every area costs exponentially more food to colonize.

Winter in Northgard is the biggest challenge for players, and getting through it requires good worker placement and preparation. The Winter season may be approached in a variety of ways depending on the clan you’re playing as and the goal you’re aiming for. Even the worst winters, however, can be survived with the right structures in place and a workforce that is well fed and sheltered.

One of Northgard’s most unusual resources is Fame, which unlocks great bonuses in the game. Defeating an opponent or slaying a wyvern are examples of significant achievements that may add Fame to your clan. Seeking Fame encourages exploration in the game as you go out to search for more dangerous opponents, but it also serves as a thread that connects all of the game’s events, as every effort is rewarded.

Northgard’s addictive gameplay loop and jaw-dropping visuals and sounds only add to the overall experience and immersion and can easily have you hooked for hours, as you try to survive the coldest winters ever experienced in the North.

Can you play Northgard on Mac?

To play Northgard on Mac, you don’t need to mess around with hacks or workarounds since there is a macOS version of the game. What this means for Mac users is that all you need to do is make sure your machine can meet the minimum system requirements for playing Northgard before buying the game.

How to play Northgard on Mac

Downloading and installing a Steam client is all you need to get Northgard up and running on your Mac. A cloud-based gaming service, such as Boosteroid or GeForce Now, is another alternative that allows Mac users to play Northgard and other games without having to install the game on their own computers.

To play Northgard with Cloud Gaming:

First, you will need to purchase the game on Steam.

Now you will need to register for Boosteroid. This allows you to add Northgard to their Cloud Gaming Library. Once uploaded you can seamlessly play the game from your Mac, TV, or Mobile Device.

Play Northgard on Mac with Boosteroid

You can download Northgard on your Mac directly if you have the Steam client for macOS installed on your system. To do that, you need to log into your Steam account, type in the game’s name in the search area, select the title, purchase it and then download the Mac OS game version from Steam on your Mac.

In most situations, downloading and playing Mac-targeted games is straightforward and doesn’t need any particular expertise. If your internet connection is fast enough, it shouldn’t take long for the game to download and then you may start playing. Northgard may be played on a Mac by following these easy steps:

M1-based Macs may execute apps that were designed for Intel-based Macs Using Apple’s Rosetta 2 emulation software. This software will request for your permission to get installed the first time you run an Intel Mac program on your Mac M1 machine. After Rosetta 2 gets installed the first time, no more action is required from your side since, from then on, the program is activated automatically whenever Intel Mac application is launched on an M1 chip Mac.