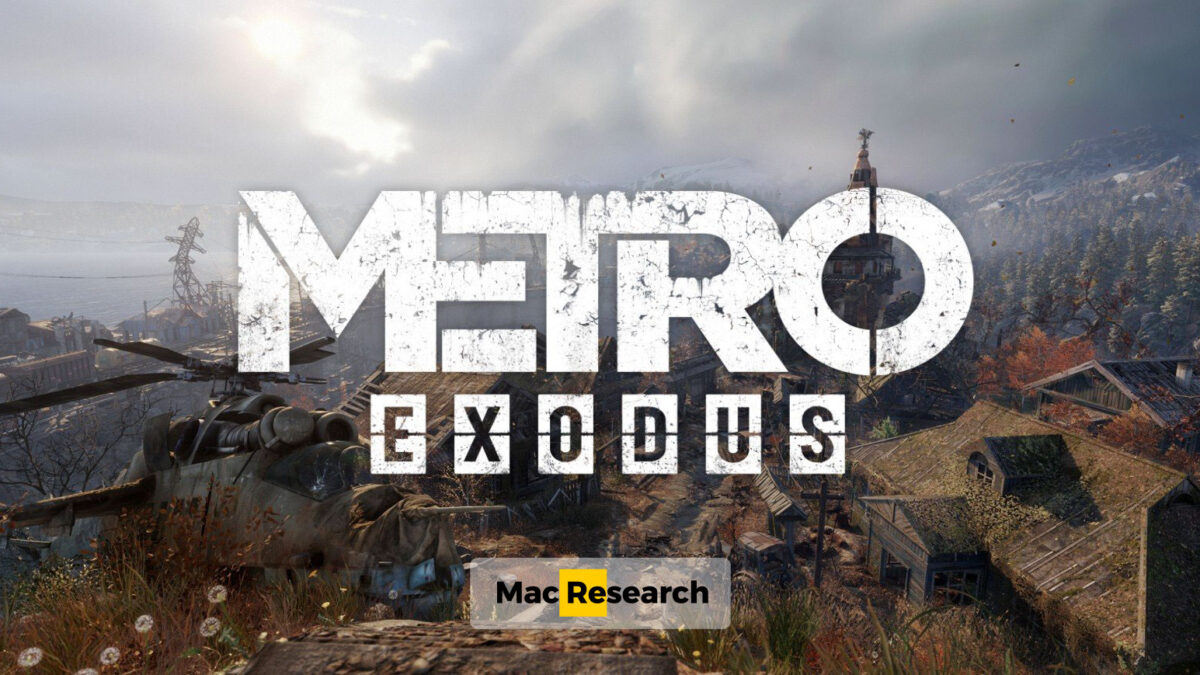 How to play Metro: Exodus on Mac

Can you play Metro: Exodus on Mac?

Metro Exodus is a thrilling and evocative journey through a Russian dystopia full of detail, survival horror, and a lot of action. The game runs on Mac and you can buy the native Mac version on Steam, Epic Games, and the Mac App Store here are the minimum system requirements for that:

About Metro: Exodus on Mac

4A Games’ Metro Exodus is a thrilling mix of a crafting-focused survival game, a character study, and an atmospheric horror game that creates one of the weirdest and most fascinating train rides and shooting game experiences.

In an era where most first-person shooters seem to insist on speeding up, Metro Exodus represents a leisurely crawl through some of the most evocative and detailed environments that can ever be seen in a story-driven shooter. The game impresses with a plot that avoids the otherworldly concepts in favor of focusing on a more touching human experience.

In fact, Metro Exodus, which is the third game in the series proves that the Metro series’ gloomy, subterranean survival-horror mood seems to never be truly dependent on being underground. The game effectively adapts its lengthy single-player campaign to the post-apocalyptic environment of Moscow’s Metro without losing any of the significant tension elements.

The main story of Metro Exodus chronicles the journey of Artyom, Ana, and a group of Spartan Rangers headed by Colonel Miller from nuclear-ravaged Moscow to safety onboard the train Aurora. Its year-long journey across continents brings a stunning variety of settings never seen in a Metro game: snow-blanketed sprawls of urban decay, sand-swept deserts, and lush forest settings, each incredibly well-recreated and populated by a variety of deadly mutants and pockets of humanity, both friendly and hostile.

The Aurora is a Soviet-era steam train that is your main method of transportation in Metro Exodus. The game starts in the broken, radioactive remains of Moscow and the tunnels underneath it. But the Aurora is soon rushing away from the ruined metropolis, along the Volga River, into the icy countryside. Exodus’ open-world is built out of multiple huge, self-contained sections rather than one continuous sprawl.

Many of the plot goals require you to descend into the dread-filled subterranean upon which the Metro series was built, and it feels more menacing and claustrophobic than ever owing to improved lighting effects and ambient sounds.

The surface world, on the other hand, allows you to explore more freely, locating enemy camps and abandoned houses to rummage for valuable materials or journal fragments and audio logs that fill out the story. To add to the fear, Metro Exodus introduces sandstorms in the Caspian desert level and packs of howling dogs in a forest valley that may attack from any direction, sending you racing for higher ground. Also, when the sun sets, additional mutants emerge to startle you on your walk from A to B.

Humanimals, a new mutant-kind, are zombie-like drones that rush you in packs, clambering over obstacles and hurling rubble at you. Most mutants are basic growling beasts that are tedious to combat, but near the end of the game, there is something really horrifying.

Metro Exodus’ beautiful settings and creepy sound design are important, but so is the game’s tight minimization of distracting menus and on-screen indications. The compass needle on Artyom’s wrist indicates your next destination, instead of a gaudy waypoint marker on the screen. The shimmering illumination of a cabin in the distance is usually more than enough to pique your curiosity and lure you into an exploring detour.

The gunplay is crisp and varied, from the humanimals that hide in the desert to ambush you, to the light-fearing spider monsters located deep below that must be weakened with your torchlight before you can kill them off up close. Metro Exodus’ combat is seldom repetitive since each mutant-kind demands a different technique to kill.

The game replaces the predecessor’s ammunition-based payment system and weapons merchants with workbenches scattered throughout each level and a backpack that may be used to craft things on the go. For example, the backpack can only be used to construct stealthy projectiles like crossbow bolts and throwing knives, whereas bullets and shotgun shells may only be made at workbenches or scavenged from dead foes one at a time.

In fact, this time around, the steady aim is more important than ever because human foes are visibly smarter, talking during a firefight and smartly flanking. While you may still remove light bulbs or turn off lamps to create a shadowy place to hide in, an enemy will now investigate if a light goes out. So even when playing it safe, it keeps you on your toes.

How to play Metro Exodus on Mac

You can play Metro Exodus on Mac either by using a cloud gaming platform, such as Boosteroid or by directly downloading the game’s macOS version from Steam. Metro Exodus is a rather demanding game, so, to play its macOS version, you’d need a powerful Mac.

To the delight of Mac users who are fans of the Metro gaming franchise, Metro Exodus received an official macOS version in 2021, making it really easy to play the game on a Mac computer (provided that one’s Mac meets the system requirements for the game).

However, if you want to play this game on your Mac, bear in mind that the system requirements for it are quite high, and only newer and more powerful Macs would be able to comfortably run it with decent graphical settings. If you aren’t sure if your Mac is up to the task of running Metro Exodus, there’s an alternative way of playing the game, namely, through cloud gaming. There are many cloud gaming platforms out there, but the two we will mention in this post are Boosteroid and GeForce Now. Metro Exodus is available on both of them, and we will now show you how you can play the game with their help.

Note: Regardless of which method to play the game you choose to try, you must first purchase Metro Exodus from Steam, so go ahead and do that before performing any of the following instructions. You can also purchase the game from Epic Games Store, but only its Steam version has macOS compatibility. If you purchase the game on Epic Games Store, you will only be able to play it through cloud gaming platforms, but not locally on your Mac.

Metro: Exodus is now available to play on cloud gaming servers. This assures NO
compatibility issues while playing on your Mac as well as top-notch performance.

You can go straight ahead and buy Metro: Exodus from the Steam store. You can play the game right away after you have purchased it. If you feel the game graphics are under-performing, you can proceed to step two where you can upload the game to the cloud gaming library for better performance.

All you need to do now is register for Boosteroid. This allows you to add Metro Exodus to their Cloud Gaming Library. Once uploaded you can seamlessly play the game from your Mac, TV, or Mobile Device.

* The recommended browsers to use with Boosteroid are Google Chrome and Opera. The service would normally work just fine with other browsers as well, but if you are having any issues, try switching to Chrome/Opera when you want to use Boosteroid.

You will find a more detailed GeForce Now guide on this page.

Note that, for the time being, only the Steam version of Metro Exodus is playable on Mac, so, if you want to actually download the game on your Mac machine, you will need to purchase it on Steam. Here’s a more detailed explanation of the process.

Metro Exodus can be played on Mac M1 either through its macOS version available on Steam or through Boosteroid or another cloud gaming service that has the game in its library. No workaround methods are required to play Metro Exodus on Mac M1.

Since there is an official macOS version for Metro Exodus, users of both Intel-based and M1-based Macs should have no problem installing and running the game on their computers, so long as the system requirements of the game are met (see the game’s requirements earlier in this article).

Most M1 Mac models should have no issue running Metro Exodus, but if you want to save storage space on your M1 Mac, you can also choose to play the game through Boosteroid, GeForce Now, or another cloud gaming platform where the game is available. Cloud gaming services are compatible with both Intel-based and M1 Macs, so you should have no problem playing Metro Exodus on your M1 Mac with the help of such a service.

How to Play TheHunter: Call of the Wild on Mac

How to play Windows games on Mac