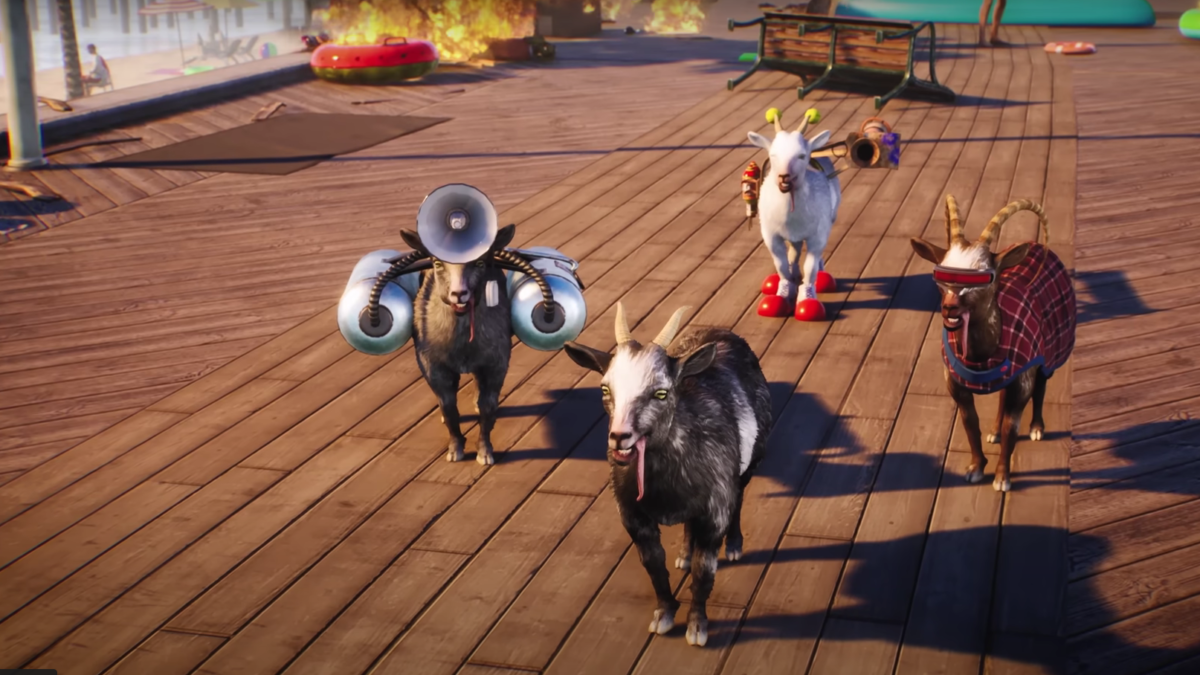 Goat Simulator 3 is a third-person action video game that invites players into the adventure of being an unstoppable goat. The game is a successor to the first Goat Simulator game, from the same developers, who have intentionally skipped Goat Simulator 2 in the series as a joke about the long development time of the new game.

Much like its predecessor, Goat Simulator 3 takes place on the made-up island of San Angora and gives players freedom over the world, encouraging them to wreak havoc everywhere by completing a series of destructive acts, accompanied by a lot of humor. The ability for the player to lick in-game objects and headbutt other items are carryover mechanics from the previous game.

However, aside from the similarities, there are some new gameplay elements that are worth mentioning. As opposed to the original, Goat Simulator 3 has a quest log and specific goals to help you advance and upgrade your Goat Castle, which serves as your main base.

There is also a list of minor tasks for you to complete, which are called “Instincts”. They help you access hidden locations and bonus items.

The collectibles in the game are now easier to detect compared to those in the previous game since they tinkle when you are close by.

There is no health bar, and you cannot be killed by anything. Thus, you can throw yourself at problems, without worrying that you’ll ever fail.

New customization options let you dress your goat with ridiculous outfits made out of anything from paper towels to tea trays. You can also fly with a jetpack, among other fun options.

The studio behind the game claims that the game’s open world is 18 times larger than the one in the original. Furthermore, they have added sections that experiment with different styles of gameplay.

The game includes a cooperative mode for up to four players that multiplies the fun even further. There are several minigames that can be played with friends, which makes it hard to get bored for even a second.

Goat Simulator 3 has definitely upped the bar in comparison to its predecessor and has upgraded to bigger and better versions of everything. The open world has been expanded, new customization options have been added, there are now online multiplayer modes with fun minigames, and the gameplay is generally goofier.

Can you play Goat Simulator 3 on Mac?

Despite the fact that Goat Simulator 3 is not officially supported for macOS, it is still possible to play the game on a Mac by employing a few workarounds. The use of cloud gaming services or Windows virtualization software allows for the running of games that aren’t officially supported on Mac computers. We will elaborate on these two possibilities in the following paragraphs.

Playing Goat Simulator 3 in the cloud is a quick and hassle-free option for those using a Mac since there is no need to download or install any software. A subscription and an account to the cloud service are all that are required.

Another option for running Goat Simulator 3 on a Mac is to use Windows Virtualization. However, in order to use this approach, you’ll need to use third-party software to set up a Windows Virtual Machine on your Mac. When installing Windows for gaming, we recommend using either Parallels or Boot Camp Assistant. Below you will find a link with instructions on how to run each of the applications.

Many Windows games do not have a native version for macOS, but you can still enjoy them by using a workaround to run them on your Mac. However, you should be aware that there may be some differences between the experience of playing the game on a Windows PC and running it through a workaround.

If you want to download Goat Simulator 3 on your Mac, you’ll need to set up a Windows emulation environment first. You should try using software like Parallels or Boot Camp Assistant if you’re just getting started. You can get a satisfying gaming experience with either of these programs without having to master any complicated software installation procedures. But before you choose a program, there’s something we need to make clear. Depending on your Mac’s processor, you’ll need to use either Boot Camp Assistant, a Windows virtualization tool only compatible with Intel-based Macs, or Parallels, a Windows virtualization solution compatible with both Intel and M1 Macs.

How to Play Goat Simulator 3 on Mac?

You can play Goat Simulator 3 on Mac via cloud gaming options like Boosteroid and Geforce Now or install a Windows on your Mac via Parallels or Boot Camp Assistant.

How to play Goat Simulator 3 on Mac M1?

Goat Simulator 3 can be played on Macs with an M1 processor by using a cloud gaming service, such as Boosteroid or GeForce Now, or by installing a Windows virtual machine with Parallels.

To play the game with Boosteroid or GeForce Now smoothly, you’ll need a reliable internet connection, but the fact that you don’t have to download and install the game to your device is a huge time and disk-space saver.

To play Goat Simulator 3 with Parallels, you’ll need to download the app, set up the Windows virtual machine, and then use Epic Games to download and install the game. Once you have a Windows virtual machine (VM) installed, however, you can play this and other unsupported games on Mac M1 without having to worry about your internet connection’s speed or stability while doing so.

To play Goat Simulator 3 on your Mac with Boosteroid, you need to visit the official website of the service, create an account and subscribe. After you do that, you can play the game by selecting it from the search bar and clicking the Play button.

Using Boosteroid to play your favorite games online has several benefits. First of all, you won’t have to bother downloading the game or anything else. The game may be played without the need to first free up space on your Mac’s hard drive. It also makes no difference what specific Mac model you have in terms of its hardware. Your online gaming experience is entirely reliant on the quality of your Internet connection.

Here are the steps you need to do to stream the game using Boosteroid:

You can click here for our detailed GeForce Now guide in case you need more explanation of the steps.

A Full Parallels Guide is accessible on the link to provide you with detailed instructions on Parallels, in case you need more assistance.