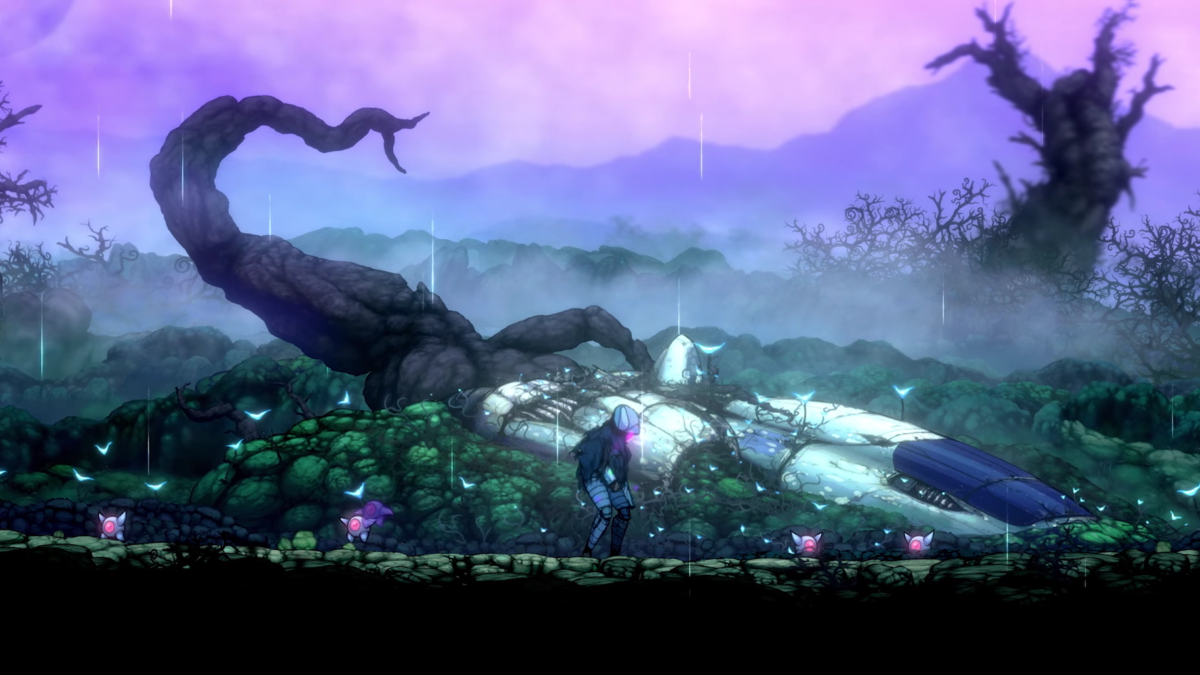 Ghost Song is an action-adventure role-playing game that features an atmospheric 2D journey of self-discovery, ancient secrets, and cosmic terror. The game is set on the desolated moon of Lorian, where a long-dormant Deadsuit (a character in a fighting costume) has finally awoken, fully equipped and ready for battle but with no memory of its original mission.

The player has to traverse a vast, 2D world and explore alien tunnels, abandoned laboratories, and secret chambers to reveal a haunting backstory.

Powerful weapons and game-changing new skills are hidden in different locations on the map. Once you find them, they allow you to go to new levels and reveal secret places. As you advance, you can unlock a wide variety of modules to upgrade your power and personalize your suit and blaster. Foes can be destroyed with quick reflexes and precision.

As you traverse the challenging terrain, you meet a cast of voiced characters and learn their individual stories of survival, bravery, abandonment, and redemption.

Ghost Song impresses with its good voice acting and its atmospheric soundtrack, which enhances the haunting atmosphere of the alien, desolate world. The game has detailed, changing environments and artwork.

With its challenging combat, a plethora of random encounters, and several possible endings, Ghost Song is a delight to play through. The combination of leveling systems and the unique fighting system make exploring the game’s vast and complex world not only rewarding but also very tense, while the game’s atmosphere and characters look unexpectedly likable.

Can you play Ghost Song on Mac?

Mac users can play Ghost Song on their machines, however, they should turn to some workarounds to make that possible because the game is not officially supported on macOS. A quick solution is to install Windows on your macOS with the help of Windows virtualization programs like Parallels and Boot Camp Assistant and then download and install Ghost Song from Steam.

To download Ghost Song on your Mac and install it, you first need to have a Windows virtual machine installed on your Mac where you can play the game.

Parallels and Boot Camp Assistant are two programs that can help you do that in an easy and straightforward process even if you don’t have any special computing skills. Detailed instructions about the programs can be found in the links below.

After your Windows is all set up and running on your Mac, you can download the Steam client, install it and then, find Ghost Song in the Steam library.

How to Play Ghost Song on Mac

You can play Ghost Song after you install a Windows OS on your Mac via Parallels or Boot Camp Assistant.

Before you can do that, however, you will need to purchase the game.

How to play Ghost Song on Mac M1?

Mac M1 users can play Ghost Song on their machine after they download and install the game in a Windows-emulated environment. Windows can be emulated on a Mac M1 with Parallels, a professional software for windows virtualization on Mac.

You can play Ghost Song on Mac (M1 and Intel models) by installing Windows on your Mac with Parallels. Read our detailed guide.

How to play Ghost Song with Parallels

You can play Ghost Song on Mac (Intel models only) by installing Windows on your Mac with Boot Camp Assistant. Read our detailed guide.

How to Play Ghost Song with Boot Camp
Mac How To, reviews