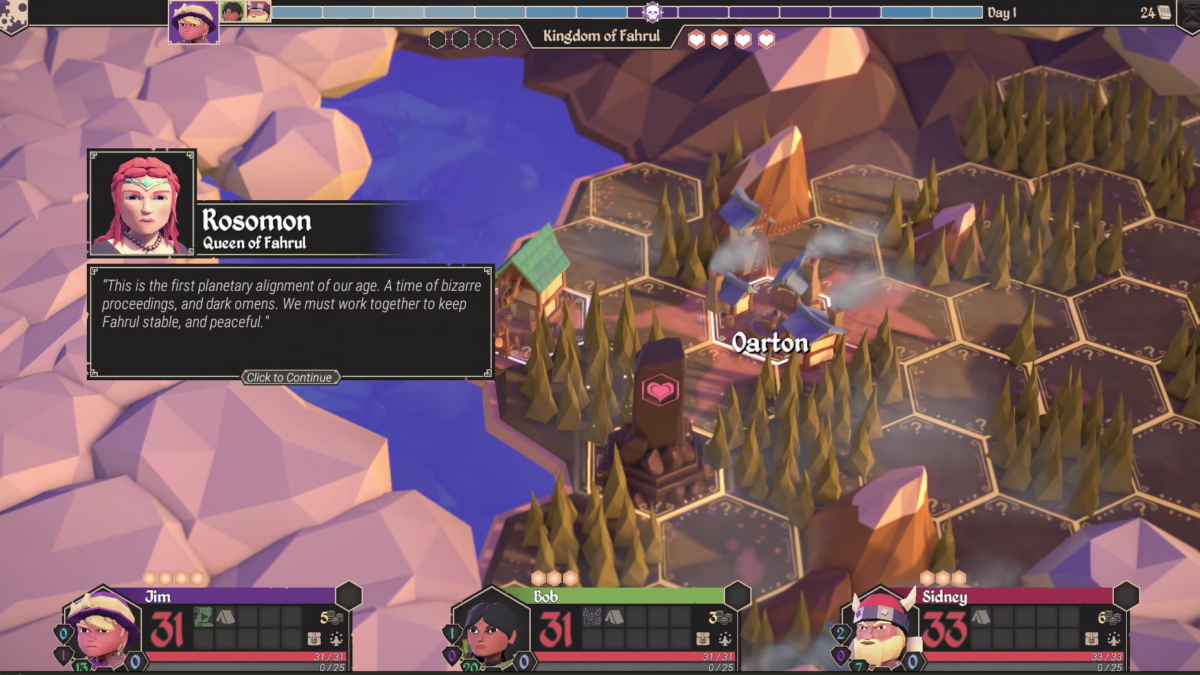 For The King (Mac)

For The King on Mac

For The King is a board game-style turn-based RPG that has a lot of charm and humor packed into it. It goes without saying that, for such a game, inviting two pals along for the ride is a sure way to have even more fun during the gameplay.

The game has an unusual appearance and basic mechanics that actually allow players to create a lot of complex in-game strategies. Fans describe For The King as an RPG with a lot of replay value, thanks to the wide variety of weapons, classes, and other unlockables that can be found during the quests. It just gets better and better every time the game is played and the co-op mode adds to the fun.

Fahrul’s once-peaceful kingdom is now in danger after its King was assassinated by an unknown attacker. The virtuous Queen Rosomon, with nowhere else to turn and her resources depleted, has made a last-ditch appeal to the people of the realm to help stop the flow of approaching catastrophe. You join the game in a chaotic world where you face an uphill battle.

There are three main campaigns in the game and each has you exploring a randomly generated kingdom, slaying monsters, and traveling between different towns. It’s preferable to play as a team, with one to three players each controlling one of three heroes in a party. It is up to you and your characters to take turns traversing the overworld hexes, avoiding or engaging in combat with random encounters, such as scaling the side of a mountain to get your hands on a shining blade.

To be successful in the game, it’s essential to go out there and explore, since you’ll frequently be juggling many tasks at once. Characters take turns attacking each other using their speed stat, much as in a JRPG. Battles are not fair and characters may only help each other in combat if they are within a few hexes of the fight, therefore an ambush can be devastating if it comes as a surprise.

The actions in the game are often resolved when you roll 100-sided dice against your stats, which may vary from 70 to 90 in what each character is strong at, and as low as 40 in what they’re weak at.

Coordination and problem-solving abilities that examine every available resource and component are essential for successful strategy-building, and sharing that task with numerous cooperating players is a great pleasure.

For The King’s captivating visuals shouldn’t deceive you into taking the game lightly. Even though it seems like something out of a children’s book in terms of design, underneath the silly headwear and adorable character designs is a roguelike RPG with a bite. If you underestimate the difficulty of the game’s generated maps and the turn-based battles that take place on them, you will be severely bitten.

Resurrecting the dead is limited, and the only way to do it is to find and destroy the hidden cult lairs. Lose all your heroes, and it’s game over.

Can you play For The King on Mac?

For The King can be played on a Mac either natively or by streaming the game directly to your Mac. You may play For The King on your Mac by downloading the game from Steam, which provides a version optimized for Macs.

The fact that For The King is compatible with Mac OS means that Mac users who want to play this wonderful game don’t have to go through any complicated or time-consuming workarounds. In order to play it on your Mac, you’ll need to simply buy the Steam version of the game that supports macOS.

Alternatively, this game may be played on a Mac using Boosteroid or another cloud gaming service, which is a pretty simple technique that will save you some valuable storage space rather than having to download the game.

Both the native and the streaming method of playing For The King on your Mac are covered in the paragraphs that follow.

How to play For The King on Mac

To play For The King on Mac, all you need to do is install Steam and then download the game using the Steam client. Boosteroid or GeForce Now are two reliable streaming platforms that may be used to stream For The King to Mac computers.

Even though setting up For The King on your Mac is a breeze, we’ll walk you through the process anyway. You may, however, want to stream the game to your Mac rather than download it if you have limited storage space or if your Mac isn’t particularly powerful for gaming. As the name “streaming” suggests, you’ll be playing on a remote gaming system that’s being streamed to your Mac. With this method, you don’t have to actually download the game, which means you won’t have to worry about taking up space on your hard drive, plus, the performance you’d receive wouldn’t be limited by your Mac’s specifications (see For The King system requirements below).

The only drawback is that you’ll need a reliable Internet connection to avoid latency and other performance issues. Boosteroid and GeForce Now game streaming instructions may be found below if you’re interested in giving it a go with For The King. If you’d rather play the game on your computer’s hard drive, you may find download instructions for For The King a little farther down the page.

For The King Set-Up Methods

How to Get For The King on Mac:

Now you will need to register for Boosteroid. This allows you to add For The King to their Cloud Gaming Library. Once uploaded you can seamlessly play the game from your Mac, TV, or Mobile Device.

Play For The King

Play For The King on Mac with Boosteroid

Play For The King on Mac with GeForce Now

After purchasing the game on Steam, download and install macOS’s Steam client program on your Mac in order to play For The King. You can download For The King for Mac by looking for it in Steam’s search bar.

Step-by-step instructions are provided here for those who want to take advantage of the fact that For The King has been officially supported for Mac.

For The King on Mac M1

Installing Rosetta 2 is required the first time you want to run an Intel Mac software or application on your Mac M1. The emulation program will be installed on your macOS if you accept the installation. If the software isn’t natively accessible for M1 Macs, Rosetta 2 will automatically activate and make the necessary adaptations for the M1 chip. You don’t need to manually start Rosetta 2 every time after the initial installation. When running For The King, the emulator will start automatically, and it will seem as if the game is running natively.